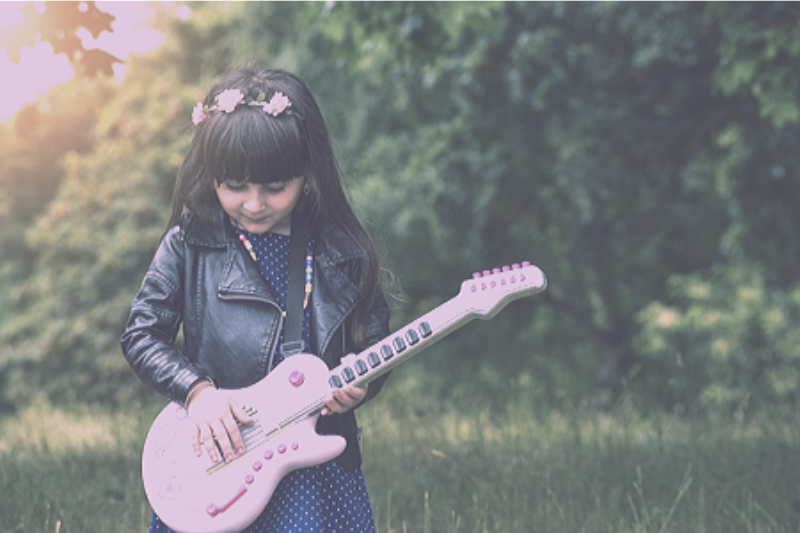 My guest post today is by Ronald Ross (author bio below). Hope you enjoy!

Many educational experts agree that introducing music education in schools and at home have great results in the development stages of children.

Music is a universal language and is also beneficial in a child’s education. Listening to music uses our entire brain. Hence, playing an instrument, learning to read music or understanding the meaning of a song, stimulates children’s different areas of learning and thinking. Besides being helpful, it is also a fun way to make the kids learn.

Let’s see how music education can benefit a child’s brain.

Music is present in all cultures and has benefits in developing a child’s native language as well as other languages.

Nina Kraus, director of the Auditory Neuroscience Laboratory at Northwestern University, says if a child plays a musical instrument, he or she will be able to interpret the language nuances which are conveyed by slight changes in the human voice.

Infants and children who listen to music while growing up develop a connection with the melodies and lyrics. This connection strengthens their language skills later in their growth period.

Music lessons may not only give your child a new added skill, it also boosts their intelligence levels.

A study conducted by Dr. Glenn Schellenberg of the University of Toronto states that IQ can be increased by 7 points in children with the help of music instruments.

An increased IQ is a very good convincing reason for getting your kids that music instrument they’ve asked for.

Want your child to ace their test scores? Then sign them up for music classes.

A recent study also stated that children who studied an instrument for approximately 18 months did better on memory tests. They also performed way better on arithmetic, language, and IQ tests than their peers who did not take music lessons.

Artists often play music when they feel a creative block because music inspires us and encourages creative thinking.

Musical education among children opens their creative doors and the ability to think outside the box for any given situation.

Music is a good exercise for the brain which your brain loves too. The very famous “Mozart Effect” states that if children listen to music composed by Mozart (or any classical music for that matter) they become more intelligent.

Many parents and schools don’t give importance to music education in a way that can boost a child’s brain power which would later translate into better performance at school and other tasks.

So, now that you know it, give your child 5-minute music breaks in between his homework or have it playing slowly in the background while they’re studying or playing. Doing this simple technique may have dramatic effects in their brain stimulation.

Children sometimes face the pressures of studies. Learning a musical instrument may prove even more stressful for them.

Soothing music and healing sounds promotes a stable mental balance and calms the nerves of children. Some of the instruments which have been used for relaxation and mindfulness are wind chimes, meditation gongs, steel tongue drums, singing bowls, and more.

Playing music doesn’t just involve your fingers and the instrument, it involves your hands, ears, eyes and muscles all at the same time. Reading music also demands your brain to work the instrument at different speed levels.

This ensures that kids who play musical instruments have better hand-eye coordination. They can quickly translate information that the brain receives upon reading music to change the physical motion and speed of the instrument.

Learning a musical instrument with constant encouragement from teachers and parents builds a sense of pride and confidence among children.

The best instrument for boosting self-confidence is drumming. Playing and making your own beats from the beginning gives a sense of achievement, which is great for self-esteem. Moreover, it is said that it only takes five seconds to learn a drum beat.

The best and the most adaptable form of drum is the double bass drum. This drum can be used to enhance all kinds of music styles and beats.

If you’re planning to get your child a double bass drum then you should also buy them the best double bass pedal too as it’s considered the “heart” of any drum kit.

Spatial intelligence is defined as the ability to generate, retain, retrieve, and transform visual images. Basically it is similar to verbal intelligence, and is very important in the performance of many tasks.

Listening to and understanding music or simply singing a song has shown to develop and improve visual learning performance.

A well-developed spatial intelligence benefits a child’s performance in solving many complex problems. This can help in subjects like advanced mathematics, architecture, engineering, gaming and in various other computer-related subjects.

Music education can be a building foundation for imagination and creative thinking in both kids and adults.

Notice how after listening to a certain song, your emotions match the mood of the music. For example, if you’re sitting at your office desk, hearing a certain type of music may suddenly have you picturing yourself driving on a highway escaping all your troubles.

Hence, music can be used to make children better at imagination, which would later make them better artists and storytellers.

In conclusion, music is more than just songs. It plays an important role in children’s growth and brain stimulation which can enrich their lives and education.

Ronald Ross loves drumming and reviews various musical instruments on Loud Beats to help people select the right instrument. He believes music is a very important part of our life and plays a great role in development of brain in children.

4 Things My Favorite Music Teachers Have Taught Me

How I Keep My Gigs Organized: Free Schedule for Freelancers

The Capricorn Musician: How Your Zodiac Sign Impacts Your Music