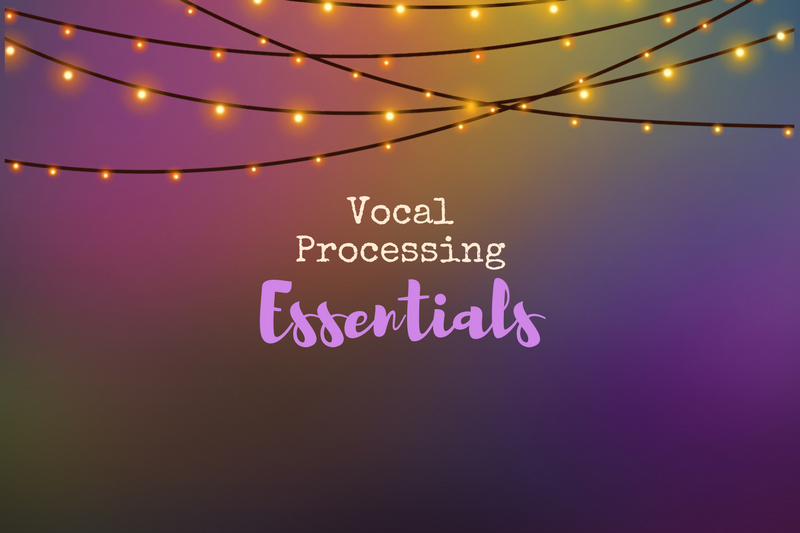 I’m super busy throughout all of November and half of December, so I’m excited to bring you guys some awesome guest posters this month!
This week is Charles Hoffman of Black Ghost Audio. Here are 12 essentials to get into Vocal Processing: 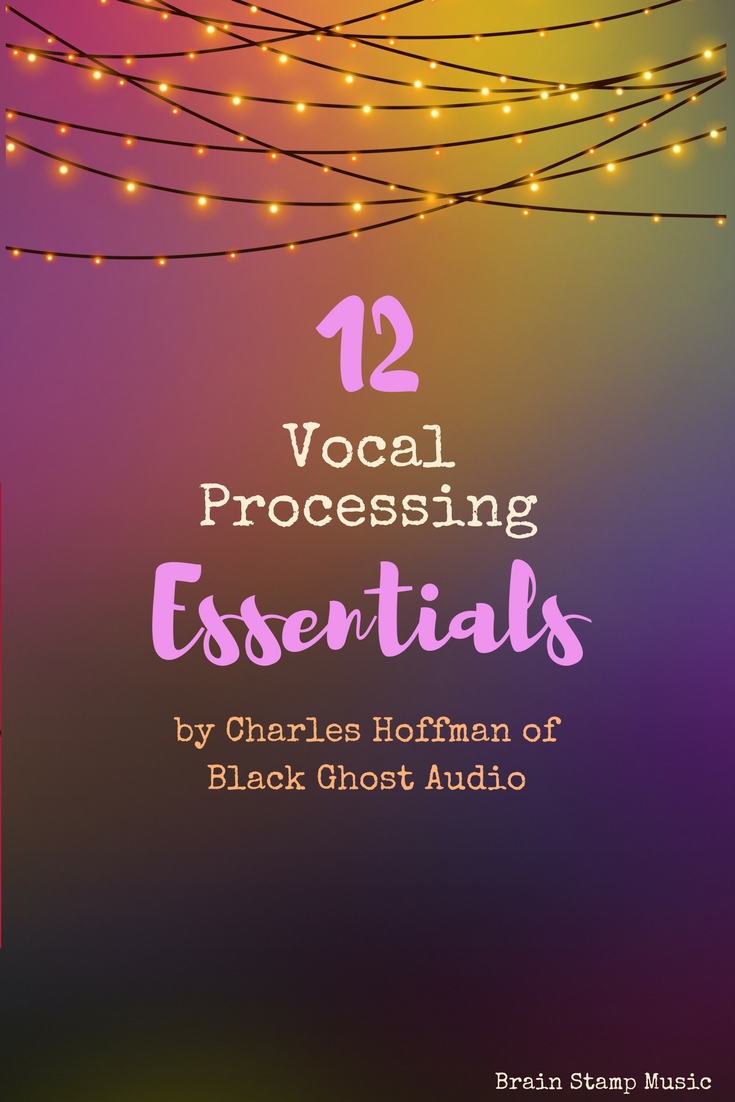 This guide is the quick and dirty version of how to get started with recording and processing vocals. Audio engineering is this massive field of study that people spend their entire lives discovering. If you’ve never touched a DAW (digital audio workstation) before, the recording process can seem a little mysterious. Achieving professional quality vocals requires hardware, software, and skill. I’m going to tell you exactly what you need in order to start creating professional quality vocal recordings. If you’re interested in learning more about music production and audio engineering, visit the Black Ghost Audio Blog.
To record vocals, you really just need a microphone, audio interface, and a DAW. Combined, this is going to run you about $447 for an entry-level professional setup. All of the plugins I recommend in this post are personal favorites, but most can easily be substituted for stock audio effects. Here’s a demo of what’s possible using the hardware and software covered in this post:

Professional quality microphones start at around $99+. One of the important things to know about audio equipment is that your ROI (return on investment) goes down substantially as you move up in price. Sure, a $1000 microphone is probably going to sound a bit better than a $99 microphone, but when you compare a $99 microphone to a $30 microphone, it’s a world of difference.
For capturing vocal performances, condenser microphones are used a majority of the time. Condenser microphones are excellent at picking up tiny details that help create a sense of realism. This realism is what helps capture a listeners attention.
Recommended Microphone: MXL-990 ($99)
This is a microphone that I’ve captured countless recordings with. To find a microphone of noticeably improved quality, you’d have to jump into the $400 range. 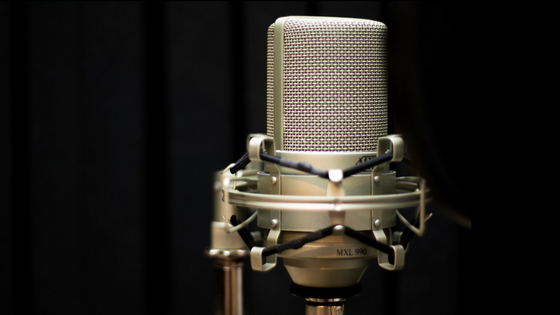 Condenser microphones require phantom power (an external power source), as well as an interface to perform A/D conversion.
The electrical signal that a condenser microphone sends to an audio interface is really quiet, so the +48V button boosts it to a healthy level.
A microphone sends an electric analog signal to the audio interface it’s connected to that needs to be converted into a digital signal (1s and 0s). Computers only understand information in a digital format, so it’s important for this conversion to take place. The process of converting an analog signal to a digital signal is called A/D (analog to digital) conversion.
Everything I just told you doesn’t really matter… but now you know! Just plug your microphone into an audio interface, press the +48V button (assuming it’s a condenser microphone), and plug the audio interface into your computer. You can now record audio into your computer.
Recommended Audio Interface: Scarlett 2i2 ($149)
This wildly popular interface allows you two connect two microphones at once. It has great audio converters and is by far the best audio interface you can grab in this price range. As you move up in price, audio interfaces will have more inputs/outputs, higher quality converters, and higher quality pre-amps. 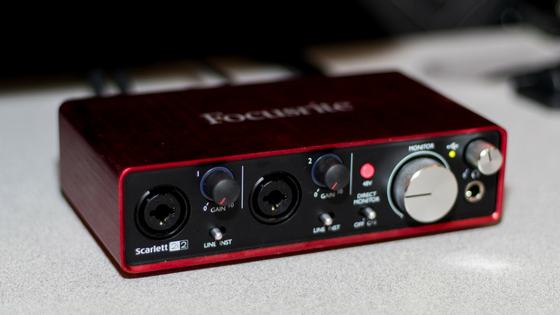 Trying to record in a standard 10 x 10ft room covered in drywall is a terrible recording waiting to happen. Even with all the best recording equipment in the world, the recording will still sound amateur. Singing in an empty room like this will result in a thin, reverberant vocal recording. You want to dampen and diffuse the sound bouncing off of the bare drywall. This can cost you next to nothing if you have some spare comforters lying around. Hang them up on your walls and you’ll solve a good 80% of your problems. People will spend thousands of dollars sound treating and isolating their recording studios. Although it may sound great, you probably don’t want to drop a year’s worth of savings on something like that if you’re just starting out.
Recommended Room Treatment: Moving Blankets ($60)
Moving blankets are another cheap alternative that provide excellent results. You can pick up a 10-pack on Amazon for $60. If you don’t want to turn your entire room into a recording space, just hang the blankets on the walls of a closet and record in there.

So you have audio running into your computer, but now what? You need a software that’s going to allow you to record it and manipulate it. This software is called a DAW (digital audio workstation). There are numerous different DAWs on the market. Certain DAWs are better than others when it comes to certain tasks. Ableton is arguably the best for writing electronic music and performing live. Pro Tools is king when it comes to recording, but sitting nicely between them is Apple’s DAW called Logic Pro X. It can be purchased from the Apple app store. Most of the audio devices I’m about to cover are already included with Logic, meaning you won’t have to go out and buy them!
Recommended DAW: Logic Pro X ($199)
Logic is far cheaper than Ableton ($749) and Pro Tools ($599). It outperforms Ableton when it comes to recording and destroys Pro Tools when it comes to MIDI programming. Logic strikes a balance between its competitors and offers it to you at a substantially lower price.

Pitch correction is a huge part of the music industry. I’m not talking about T-Pain style vocals where everything is insanely auto-tuned. If a vocalist has an excellent take while recording, but misses a note here and there, pitch correction can help to save an otherwise flawless performance. Logic comes with a stock pitch correction feature.
Recommended Pitch Correction Plugin: Celemony Melodyne Essential ($99)
This is the industry standard when it comes to natural pitch correction. The plugin scans your audio and offers you a host of controls to manipulate pitch and time. 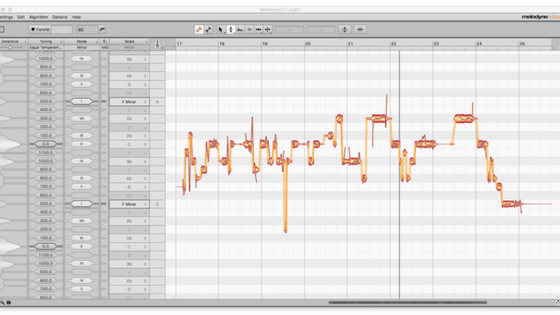 A de-esser removes the sibilant sounds that are picked up by your microphone. Words that contain the letters C, F, K, P, Q, S, and T, are common offenders. The burst of air that hits your microphone when performing these consonant sounds creates loud audio peaks in your recording. A de-esser reduces these peaks and makes them sound more natural.
Recommended De-Esser:Waves Renaissance DeEsser ($79)
Unfortunately, not many DAWs come with a stock de-esser. If you don’t feel like spending the money on a plug-in that does this, you can learn how to make one with this post on How to Fix Harsh Vocals.

An EQ allows you to increase or decrease the gain of different frequencies. Let’s say that the microphone you recorded with was really bright, but you don’t want your recording to sound that bright; an EQ will allow you to reduce the level of your high-end frequencies to balance out the vocal recording.
Recommended EQ: Fab Filter Pro-Q ($179)
I recommend the Pro-Q because it’s a favorite amongst music producers and audio engineers. However, you can just use the stock EQ that comes with your DAW. The Pro-Q is great and has lots of fancy features, but it’s probably overkill if you’re just recording vocals.

Audio compression is a bit of a tricky concept to wrap your head around because it’s a man-made phenomenon. When you compress your audio, you’re shortening its dynamic range. This means that you’re making the difference between quiet parts of your audio, and loud parts of your audio, smaller. With heavily compressed audio, the section of your song where you’re whispering will playback almost as loud as the section of your song where you’re screaming. If you’d like to learn exactly how compression works, you can check out this video by Wickie Media.
Recommended Compressor: Fab Filter Pro-C ($179)
The Pro-C is capable of performing very fast compression. It also provides you with some great visual feedback. This is excellent for catching and attenuating peaks in the audio that you’ve recorded. Your DAW probably has a decent stock compressor that will get the job done. The stock compressor in Logic actually sounds really nice.

A limiter works off of the concept of compression, but any audio that becomes too loud is immediately attenuated with a ratio of 1:inf. Limiters are essentially compressors with extremely aggressive settings. Their purpose is to allow you to achieve maximum loudness while avoiding digital clipping (a type of distortion that occurs when you overdrive a digital signal).
Recommended Limiter: Fab Filter Pro-L ($179)
This limiter allows you to push audio further and harder than any other limiter on the market. It adds some subtle color to your sound, but its generally quite desirable. I highly suggest you avoid using your stock limiter. From my experience, I’ve found stock limiters tend to distort quickly and provide really lackluster results.

A delay is a timed echo of an original audio signal. The timing of the echo is typically a note value, but it can also be set in ms (milliseconds). Delay is meant to create a sense of space for your vocals. A simple 1/8 note or 1/4 note delay with a little bit of feedback will get you started. You can adjust delay settings to fit the needs of your project.
Recommended Delay: Soundtoys Echoboy ($199)
Echoboy is my favorite delay because it’s analog modeled and has this awesome old-school sound to it. Most DAWs come with a stock delay that will work just fine as well.

Reverb emulates the sound of rooms, halls or imaginary spaces. By adjusting the parameters of a reverb device, you can control the size, shape, and material of the room. This can make your vocals sound like they’re in a closet, or make them sound like they’re in a concert hall! Adding reverb to vocals that already have reverb on them will make them sound like a mess. That’s why it’s important to apply some sort of acoustic treatment to your recording space. Recording dry vocals will make it easier to apply a great reverb later on.
Recommended Reverb: Valhalla VintageVerb ($50)
Valhalla VintageVerb is a reverb I use a lot on vocals. It has a warm 1970s/1980s sound to it that compliments most vocal performances. If you’re sick of your stock reverb, the Valhalla VintageVerb is the one to upgrade to. 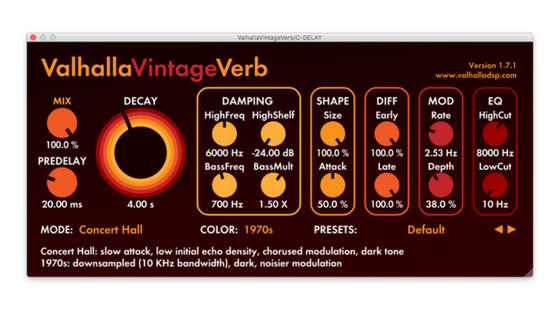 Having all these tools is great, but if you don’t know how to use any of them, you’re going to be shooting in the dark. It’s important to take the time to research how all of these devices work, as well as when it’s appropriate to apply them. Truthfully, vocal processing is one of the more difficult elements of a song to mix well; the reason being that there are so many steps involved in the process. It’s easy to ruin, rather than enhance a vocal recording if you haven’t done your homework.
Don’t let this put you off. Learning about music production and audio engineering can be fun… if you have access to the right resources. The Black Ghost Audio Blog has tons of great articles on production, mixing and mastering.
That sums it up! I know that a lot of these concepts are probably new and overwhelming, but now you have a good idea of what it takes to start creating professional vocal recordings. It’s absolutely possible to create radio-quality vocals at home. It just takes the right tools, a good understanding of them, and a keen set of ears!

Working with Reverb for Vocals

How to Convey a Melody When You Can’t Sing

How I Realized I Wanted to be a Professional Session Singer