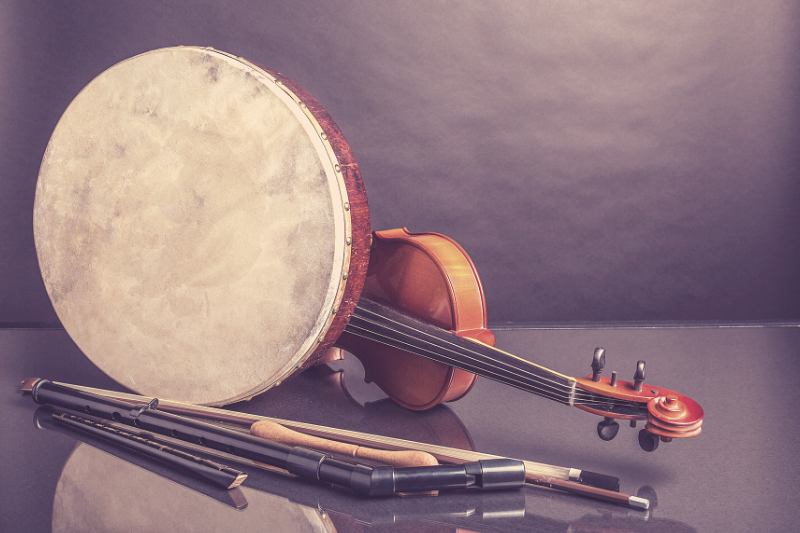 I’m working my way through my DNA results (you can see the beginning of that project here)! I’m no longer sure what percentage of my DNA is Irish, because I feel like 23 and Me keeps changing my results. I plan on covering every country in my result, but some I’ve already done. You can see Poland, my first one, here, along with Hungary, France, and England. I also recently did Scotland and Wales, because those were new additions to my DNA results. Let’s get into Ireland!

Obviously I’d never be able to cover every single Irish artist, so it’s likely I left yours out. If so, send me a Tweet and let me know who to check out!

If you prefer to watch a video version of this post, here it is!

The Irish Annals were ancient records of Ireland, sort of an early census. From those, we can gain great insight into the earliest Irish musicians. One such musician was Amhlaeibh Mac Innaighneorach, the “chief harp player” of Ireland. Not much is known about him, but from these records we know that he died in 1168.

Irish musicians were generally not held in high regard, at least not as high as poets or historians. I feel like this is true everywhere, even today to a degree.

If that name is intimidating, I’m told that the English pronunciation is Turlough O’Carolan. What are all the b’s for, then? I don’t understand Gaelic at all. Harps are a big deal in Irish music, and Turlough was one of the most well-known players. Born in 1670, he got smallpox and became blind at age 18. His mother set him up with harp lessons, as you do when you’re blinded by smallpox. He became quite good at it and at the age of 21, he got on a horse to travel to compose harp songs for people.

Couple questions: 1. How do you ride a horse blind, especially if you’re going alone and traveling to specific destinations? 2. How do you carry a harp around on a horse?

Anyway, O’Carolan became well-known for his harp compositions. Here is one performed by a well-known Irish harp group, The Chieftains:

This one is pronounced Owen Roe O’Sullivan. He was an Irish poet an lyricist. Apparently the “Rua” of his name refers to him having red hair. Maybe I’ll rename myself “Mella Rua.” A lot of the history about O’Sullivan is written in the way they spoke at the time (late 1700s), so it’s difficult to understand a lot of it. Apparently he started his own school at the age of 18? But it doesn’t say what the school was for, and then “an incident occurred, nothing to his credit, which led to the break-up of his establishment.” I…okay.

He knocked up his bosses wife after impressing her that he could write in four different languages. He then fled and joined the British military. At age 35, he got in a fight with someone who stabbed him with a pair of tongs. He caught fever from an infection and died. None of O’Sullivan’s lyrics were ever written down, so they’ve relied on re-telling until someone else wrote them. It was ridiculously hard to find any of his work online, but Wikipedia had some of his lyrics:

My name is Ó Súilleabháin, a most eminent teacher;
My qualifications will ne’er be extinct;
I’d write as good Latin as any in the nation;
No doubt I’m experienced in arithmetic.

This was apparently a drinking song? Try getting drunk and singing it and let me know how it goes!

The hornpipe is said to have shared heritage in Ireland, Scotland and England. It’s a dance with hard shoes and hardly any arm movement. Here are some high school kids doing an awesome job (as far as I can tell):

There are also reels and jigs, which all sort of look the same to me but I can’t dance to save my life so I wouldn’t know.

When I was a young child, Riverdance was the hot new craze that old white people everywhere loved. My grandparents were obsessed with it. It was started by Bill Whelan and Dónal Lunny, two Irish composers who created it for the 1994 Eurovision Song Contest. It was such a huge deal that it became a full stage show. Here is the performance that started it all, and it looks like my grandma wrote the captions for it:

I like that they’re moving their arms at least.

When she toured America, she was quite popular with gold miners and they fawned over her like a celebrity. She tried gold panning with them and they even named a street after her (Kate Hayes Street in Grass Valley, CA). Her signature song was “Kathleen Mavourneen,” which she sang to close out her shows and also for Queen Victoria at Buckingham Palace. Obviously her version wasn’t recorded, but it became a popular song during the Civil War in America. Here is the most popular version currently, sung by John McCormack:

B*Witched was a popular girl group when I was a kid, as were the groups Westlife and The Cranberries. Artists from around my dad’s age include Van Morrison, Sinead O’Connor, Enya and U2. Current artists include Hozier, Niall Horan and EDEN.

Samantha Mumba is one of the biggest selling Irish acts and I loved her as a child. Here is “Baby, Come On Over,” which earned her a Grammy nomination:

To my knowledge, she doesn’t sing anymore but she released one song in 2013. It’s…not great. The song was from an Irish songwriting competition. These are the chorus lyrics:

…What was the criteria for being on this show? I will throw my hat into the ring on the next season. I’m part Irish and I know how to write, and apparently those are the only requirements.

Is that a current group photo? How old were they when they started? They look super young here.

Anyway that wraps up Ireland! Next time we’ll cover Norway, where one of my favorite singer/songwriters is from, so I’m excited for that!