A Brief History of Scottish Music 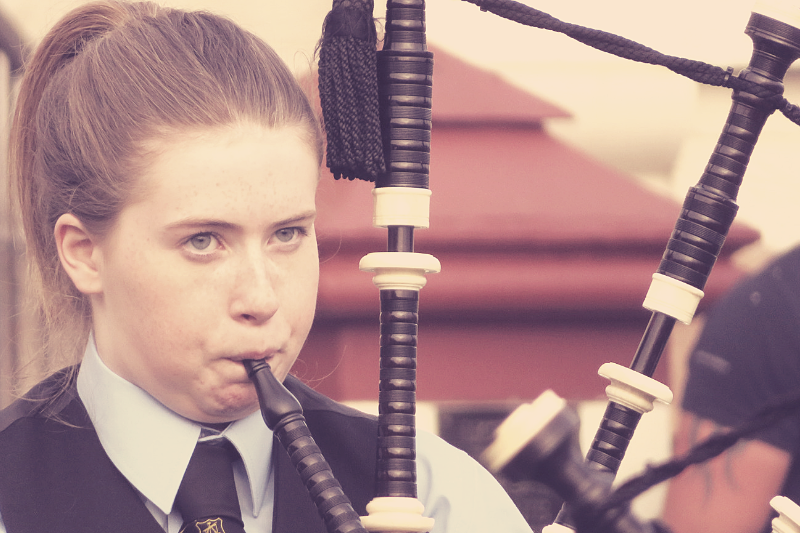 I’m taking a detour on my DNA project (see the intro here) because my initial results led me to believe I wasn’t Scottish at all. I was kind of surprised by that, given my red hair (although I’m Irish as well). But 23 and Me has refined my results and now includes Scotland, specifically Glasgow, and also Wales. So I’m covering Scottish music this week and Wales will be next.

The Music of Scotland

If you know any Scottish music or artists I should check out, please tweet me! If you prefer to watch videos instead of read, my video on this post is at the bottom!

Honestly, the first and only thing that comes to mind when I think of Scottish music is bagpipes:

They certainly have a…unique sound, don’t they? I am not entirely sure how I feel about them. Although they are primarily associated with Scotland, they have actually been played for centuries all over the world. Here is a photo of bagpipes in Spain in the 13th century:

There are many different styles of bagpipes, and the Scottish version is the most well-known. It is called the Great Highland Bagpipe and dates back to the 15th century.

I don’t know if this means “family” in the traditional sense of mother-father-siblings, or if “family” means a sort of tribe or group. There were families that played bagpipes and some were very well-known, such as the MacCrimmons and the MacGregors. I’m not going to pretend to understand the “clan” part of this, because this is all new to me. I think clan means family but again, I don’t know if it’s something you’re born into or something you join. I don’t believe my last name (Barnes) is connected to a piping family, or a clan. If you’re part of a Scottish clan, let me know what that’s all about!

Europe’s oldest surviving stringed instrument is a Scottish lyre. It dates back to the Iron Age (about 2300 BC) and was found on the Isle of Skye. One of the oldest whistles in existence is a Scottish tin whistle, dated to around the 14th century.

Not much is known about this Scottish composer, but his working period was between 1530-1576. His most well-known song is “Si Qui Diliget Me,” and I had a hard time finding this online but here it is performed by a choir in 2018:

This was written for James V of Scotland, who was a musician himself and largely responsible for bringing a great deal of music to Scotland. Apparently, James V could sight-read music but was not a good singer. He was a talented lute player and brought a great deal of French music to the Scottish kingdom (you can see my post on French music here).

During the Scottish reformation, church music became unpopular and therefore music in general became relatively unimportant. Back then, you either wrote church music or nothing. It wasn’t until James V’s daughter, Mary, Queen of Scots, returned from France that music began to flourish in Scotland again. Mary had a good voice and was also a talented flute player.

There are a great deal of Scottish composers, but like my previous posts, I tend to focus mainly on stories of interest. This Skinner dude frequently called himself a “genius” and was so annoying that his wife left him and moved to Rhodesia. He couldn’t afford to publish his own works so he wrote them on the backs of envelopes and sent them to friends. He played the fiddle (another major Scottish instrument) and was a very talented dancer. In 1926, at the age of 83, he entered a “jig competition” (dancing, I guess?) and got in a fight with his piano player, storming off the stage without finishing his audition. He never performed in public again and died a year later. His most famous song is the “Bonnie Lass o’ Bon Accord:”

In the 1960s, The White Heather Club was a popular variety show on the BBC. Its host was Andy Stewart, a comedian, celebrity impersonator and singer/songwriter. His most famous song is “Donald Where’s Your Troosers,” which was popular in 1960 and then inexplicably popular again in the late 1980s:

The White Heather Club was relatively popular during its time, however it was criticized for further stereotyping the Scottish people (or “tartanising,” which is to make a mockery of Scottish culture) and in 2006 it was named one of the worst 20 TV shows ever. However, in all fairness, what variety shows are actually quality content? I can’t speak for the tartanising, but I can in confidence say that any variety show (looking at you, America’s Got Talent) is less pleasurable than staring at the wall for 30 minutes.

Singer/songwriter Donovan is known for his psychedelic folk songs, including “Mellow Yellow:”

An avid marijuana user, Donovan became the first UK artist to get arrested for possession of cannabis. He also used LSD and referenced it in several of his songs. However, after meeting an Indian guru and learning meditation, he gave up drugs and urged youth to do the same. He was good friends with The Beatles and taught John Lennon and Paul McCartney a finger-picking guitar style that they used on “Blackbird” and other songs. Donovan has been inducted into both the Rock and Roll and Songwriter Halls of Fame and won a BMI Icon award.

I didn’t know she was Scottish, but she became known with the Eurythmics and then branched out to do her own thing. She’s won countless awards and was named “the greatest white soul singer alive” by VH1. Which…ok. I mean, I’m not saying she’s not a great singer, but that title alone is a stretch and I don’t know that I would even call her a soul singer. “Why” is arguably her best-known song, and it’s not really a soul song:

Lennox is also a philanthropist and does a lot of work for AIDS awareness and prevention in Africa. This plus her androgynous look and support for LGBTQ rights has made her a gay icon.

Scotland has a lot of annual jazz festivals. The Edinburgh Jazz & Blues Festival started in 1979. The Glasgow Jazz Festival was founded in 1987 and hosted Sarah Vaughan. There is also a Dundee Jazz Festival but I couldn’t find much information on that one. Speaking of jazz and “greatest white soul singers,” I want to introduce you to (or remind you of) Paolo Giovanni Nutini.

He’s been compared to Joe Cocker and Rod Stewart, but his voice kind of reminds me of Seals and Crofts a little bit. I first found him while working on my zodiac blogs (he’s a Capricorn) and I’ve been a fan ever since. I actually prefer his live/acoustic songs to the recorded ones, which is rare for me. Here’s another live one you might like:

Currently a big name in pop music, Calvin Harris is a huge singer/songwriter, producer and DJ. He also dated Taylor Swift, which is arguably his most important culture contribution (kidding! but not kidding that he dated TayTay). He’s worked with Rihanna several times, but the most notable was “This is What You Came For,” which he wrote with Taylor Swift:

This is notable because of the drama surrounding it. At first Swift didn’t want credit for the song, but then changed her mind. It caused a Twitter fight and countless tabloid articles. More recently, Harris worked with Rag’n’Bone Man, an incredible British artist. The single is called “Giant:”

When I read and wrote about “tartanising” above, I immediately thought of The Simpson’s character, Groundskeeper Willie. I mean, can you think of a more stereotypical Scottish character? It’s offensive, it’s hilarious, and I love it. And I’m part Scottish so I’m allowed to say that it’s okay. You might be offended by him, and that’s okay too. However, I’m ending this post on one of my favorite Willie performances:

I get that some might find him offensive, but listen. If we can’t laugh at ourselves, we’d have to laugh at other people, and that would be even more offensive.

Thanks for touring Scotland and Scottish music with me! Next week will be Wales, so check in for that! Here is my video on this post: