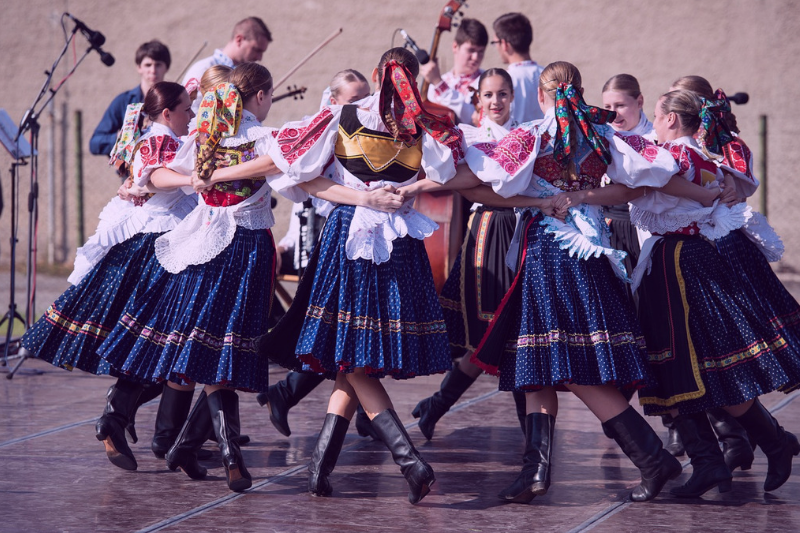 This is my second post in my series of exploring my musical DNA. The intro article is here and my first country, Poland, is here. Today we are exploring Slovak music! This was one of the biggest percentages of my DNA so I’m excited to look into it.

Obviously, this is going to be a brief and abridged history. I also need to mention that this entire area of Poland-Slovakia-Ukraine-Hungary has a similar musical history, due to being so close to each other. However, I did find enough interesting differences to warrant a separate post for each area.

Here is my video with a shortened version of everything written here:

Do you have a favorite Slovak artist? If so, please tweet at me and let me know!

Bone pipes have been found in Slovakia that date back to the Early Bronze Age, which is about 3,000 BC. Drums were found from the Paleolithic period (roughly 11,650 BP) and bells were found made of iron and bronze from the 3rd century AD.

There is also a Fujara, which is this giant woodwind instrument:

Then there’s a Koncovka, another flute-like instrument:

Both of these were said to have been played by shepherds. I don’t know if they played it for the sheep or if it was just because they were bored or what, but I am so interested in these. I’d love to find one and learn to play it!

Unlike Poland, Slovakia doesn’t have any interesting saint stories. Slovakia does have a list of composers, but none that are widely known. I looked into each one to see if I could find any interesting drama for you, but they all seemed pretty normal. The oldest composer on the list is Jan Levoslav Bella. His most “controversial” fact is that he left Catholicism and became a Protestant, which is NBD today but was probably big back then. Here is one of his pieces:

He wrote the first Slovak opera, Wieland der Schmied (Wieland the Blacksmith), but I couldn’t find a good video online. There is this video that appears to be a short documentary on him, but it is not subtitled and I don’t speak Slovak so I have no idea what it’s about:

If you speak it, please let me know what they’re saying!

I’m going to talk more about this when I write about Hungary, but there is a lot of gypsy folk music from this culture. I’ve always been interested in gypsy lifestyle and history, so it’s cool to know that it’s part of my ancestry.

Slovak Roma music was traditionally only performed by males (which is b.s. but ok) and included violin, contrabass and dulcimer. Lyrics vary between Slovak and Romani, and the two main forms are either ballads without set rhythm or dance songs. Here’s one example:

There’s likely some crossover between regular Slovak folk music and the Roma-Slovak music mentioned above, but I just feel I should talk about this in more detail. Like most cultures, folk music was created to pass the time and for entertainment purposes. Shepherds, the military, parents raising young children, they all needed something to pass the time before TikTok or YouTube was a thing (thank god we’re so much more advanced now, amirite??). The songs were all designed to tell stories and remember history or fairy tales. I found this song to be particularly interesting:

It’s called “Marejna” and is dedicated to the Slavic Goddess of Death and Winter. Every spring an effigy of Marejna is burned or drowned to celebrate the end of winter. This is actually an event celebrated in many cultures, including Poland, Russia, and many other European countries. Nowadays it’s more a celebration of the return of spring, but the church did try to stop the practice because of course they did. They first tried to forbid it altogether, and then tried to replace Marejna with an effigy of Judas, but everyone was like “nah we’re good thx” and the tradition remains.

Michaela Paštéková is a really interesting singer that I want to focus on for a bit. She was a child star in the 90s with songs like this one:

And look, I’m really not trying to be rude here, and I guess music was different in the 90s, but…what is this? How did Rebecca Black get so much hate for “Friday” and this was a massive hit? Maybe I need to understand the words to get it.

Anyway, today Michaela has a PhD and is a teacher. She also does “curatorial activities in the field of photography and aesthetics,” according to her Wikipedia page. I have no idea what that means, but I think this story is really cool. She has a really interesting life with a lot of stories to tell!

The next singer I want to talk about is Celeste Buckingham, but I’m a little confused by her background. She’s listed as a Slovak singer, even though she’s actually from Switzerland? Anyway, her song “Run Run Run” is a bop and I’m a fan for sure:

She appeared on season 2 of Česko Slovenská SuperStar, which is the Czech-Slovak version of American Idol. I want to take a detour and talk about this show for a second:

Both the Czech Republic and Slovakia had their own idol shows (because god forbid any corner of the earth not have a singing contest). Each version had three seasons, and then they decided to merge. The slogan is “Two languages, one voice/vote.” I don’t know if that’s just awkward English translation, or if they really mean “voice/vote.”

To keep things fair, the show is broadcast in both countries and has hosts and judges from each country. The final 12 contestants are splint into genders AND nationalities to guarantee a 50% share for each country in the top 12. Meaning, the top 12 must consist of: 3 Czech men, 3 Czech women, 3 Slovak men, and 3 Slovak women. I mean, really? Is this fair or necessary? What if Slovakia has 4 REALLY good female singers? Is that not allowed? This whole thing just seems like two divorced parents trying to be VERY FAIR with their kids but not necessarily making sense. I don’t know, it’s not that deep and I don’t really care. I just thought it was interesting and slightly weird.

It also needs to be stated that Czechoslovakia was a thing until 1993, when they split and became Czech Republic and Slovakia. So they split but now have to share a TV show.

That means ‘final’ in Slovak. Like most all-white European countries, Slovakia has a surplus of angry punk bands. You can see an extensive list here.

Overall I think my favorite part of learning Slovak music is the old instruments. What was your favorite? Do you have any Slovak music facts we should know? Please let me know in the comments!

New Remix Single: Don’t Give Me Your Life with Dj McB

An Interview with David and Jake from Surfacer