A Brief History of Ukrainian Music 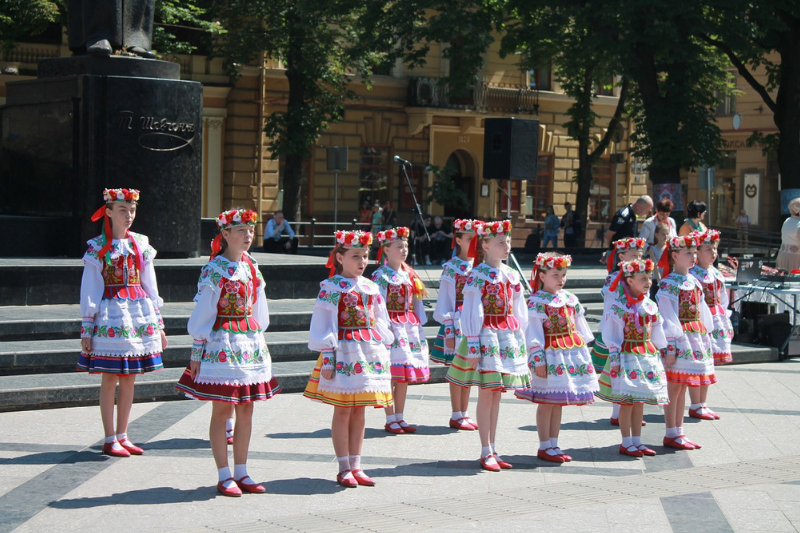 Today we are talking about Ukrainian music, which is part of my DNA results. This is a project where I got my DNA tested (you can see the post here) and I’m researching the musical history of each place I’m from. So far I’ve done Poland, Slovakia and Hungary. The Ukraine is part of this same general area, but it has a lot of interesting parts that make it different from the rest.

Before we get started, I’d love to know if you have a favorite Ukrainian artist I should check out! Tweet me and let me know:

Ukraine used to be part of the Soviet Union, which is unlike the previous three countries I mentioned (the Soviet Union actually ran along the border of Poland, Hungary, Czechoslovakia and others). Ukraine was actually the musical heartland of the former Russian Empire and was home to its first professional music academy. The school goes by different names but is commonly known as the National Music Academy of Ukraine or Kiev Conservatory. I’m going to focus on this for a bit because I found it interesting:

Founded in 1913, the school was founded by Sergei Rachmaninoff and Alexander Glazunov, two Russian composers. The school was a Ukrainian campus of the Russian Musical Society which was founded in 1859. The original building was a hotel in the 1890s (so it’s definitely haunted), but was destroyed in World War II. The building was rebuilt and named after Tchaikovsky, which is kind of weird to me because he didn’t start the school. He also is a Russian composer, and I would think they’d want to use a Ukrainian one, but they did use the Ukrainian spelling of “Petro” instead of “Pyotr.” Today the school is one of the best music schools in Europe and has a theatre, cinema and television university as well.

Another Ukrainian school originally from the Russian Musical Society is the Odessa National Academy of Music, also founded in 1913. I had a tough time researching this one, because most of the translations to English seemed to intertwine with the National Music Academy of Ukraine. However, they are two different locations as shown here:

So unfortunately I don’t have a lot of information on the Odessa Academy, but it is part of the original Russian Musical Society and was founded around the same time as the National Music Academy of Ukraine.

Carol of the Ukrainian Bells

Carol of the Bells, a popular Christmas carol in America, was written by Mykola Leontovych (whom we’ll discuss in a minute). Shockingly to no one, the original intent of the song was not Christianity but was later changed when Christians came and bulldozed over everyone else’s beliefs. The song is called “Shchedryk” (or “bountiful”) and is based on a folk chant which was thought to have magical properties. The Ukrainian lyrics alternate accents in each measure from 3/4 to 6/8 and back again, and has a four-note pattern in a range of a minor third. These are the original lyrics:

to summon the master:

“Come out, come out, O master

look at the sheep pen,

there the ewes have stumbled

and the lambkins have been born

Thy goods are great,

thou wilt have a lot of money,

If not money, then chaff.

thou hast a dark-eyebrowed wife.”

So, let’s clarify a few things: “Shchedrivka” means “carol.” Basically a bird flew into a guy’s house and told him he’ll have a lot of money because his sheep gave birth and he’s got a lot of bling. “Chaff” means grain, and apparently “dark-eyebrowed wife” is a good thing. TL;DR – it’s a bird coming in to grant good things to a guy. Christians came and ruined it in 1936 when the dude who heard it said it reminded him of bells.

Here is the original version, because it should be preserved and honored for what it was intended to be:

And hey, if you want a lot of grain, some baby sheep and a hot wife with dark eyebrows, maybe try singing this yourself and see if it is in fact magic.

Leontovych was a Ukrainian composer who wrote the above “Shchedryk” song and specialized in a cappella music. He would have really loved the Pentatonix version of “Carol of the Bells” then, I bet:

Born in 1877, Leontovych became known as the “Ukrainian Bach.” He came from a musical family, with one sister studying at the aforementioned Kiev University and the other studying at Odessa University. Mykola himself studied at the Sharhorod Spiritual Beginners School, which sounds like something from Harry Potter. He studied singing and was apparently really good at it. He also played violin and started writing choral arrangements while studying music theory.

Mykola eventually took over as the choir director of the school and added secular music to the lessons, and you can guess how that went. He further angered his family by being the only male to become a music teacher instead of a priest. He was known to be shy but very witty and a great storyteller. As a perfectionist, he hated releasing any music that didn’t meet his standards. After his second compilation of songs was published, he bought all 300 copies and destroyed them because he wasn’t satisfied with it. I know a lot of current artists claim to be perfectionists themselves, but would Lady Gaga buy all of her albums and destroy them? I think not. Mykola is epic on a different level.

Leontovych also had enemies, however. He was an active member of the independence movement, which promoted Ukraine as an independent state. He had plans to leave the country for Romania, but was murdered by a Soviet security agent in 1921. The full details of his death are here but I will paraphrase: While staying at his parents’ home, a stranger came and asked to stay the night (not uncommon back then). In the morning, he shot Leontovych in the head, robbed the family and fled the house. The family had no money so he stole their clothes. Although it seemed like a robbery, most believe the murder happened for political reasons. He is a martyr in the Eastern Orthodox Ukrainian Church.

Nowadays it’s relatively common to see someone accompany themselves on a guitar, be it Ed Sheeran, Jason Mraz or some emo douchebag at a coffee shop. However, this tradition was a hot-button issue in Ukraine. Self-accompanied musicians called “Kobzari” sang while playing a Kobza or Bandura.

Many Kobzari were blind and would use their music to ask for money, which the government didn’t like. I’m just saying, the Ukrainian government would really hate downtown Nashville also. In the 17th century they formed a Kobzar Guild, dedicated to helping each other and growing their businesses.

In the 1930s, there was a Ukrainian ethnocide where almost all traditional Kobzari were killed and had their instruments destroyed. I don’t know if this was because of the begging, or because Stalin just really hated their music? I wasn’t able to find that info but either way this time in the Ukraine was awful. Stalin orchestrated a “Holodomor” (or forced famine) which killed millions of Ukrainians. It is known as the Ukrainian Genocide of 1932 and was done to try to prevent Ukrainian independence from the USSR. Household food was confiscated, outside aid was refused, and the death toll has been compared to the Holocaust with up to 10 million deaths. In 1991, the Kobzar guild was re-established to revive ancient traditions.

Like other European countries I’ve covered, there are a lot of current metal bands from Ukraine. However, I’d like to focus on Nina Matviyenko because she’s quite interesting. She performs traditional Ukrainian folk songs and has performed all over the world representing Ukrainian music. In 1988 she received the Shevchenko National Prize, which is the highest Ukrainian prize for works of culture. She also received the People’s Artist of Ukraine, the highest title awarded to outstanding performing artists.

I know my Ukrainian fam will be upset with me for this, but what in the christ is that god-awful instrument in the beginning? It’s like, worse than bagpipes, if you can imagine. I recommend skipping ahead to 0:36 so your ears will survive the assault. About Nina: I couldn’t find any details about her personal life, but I thought it was important that you know about her.

I really can’t say enough about how fascinating I found Ukrainian music and history. Every person or event I searched led me down another rabbit hole into some other wild story. I had no idea I was even Ukrainian, so learning about this has really opened my eyes to some of my heritage. I hope this was interesting for you as well! If you know any good Ukrainian stories, please feel free to share in the comments!

Greek Music: A Brief History of the Music of Greece

A Brief History of Finnish Music