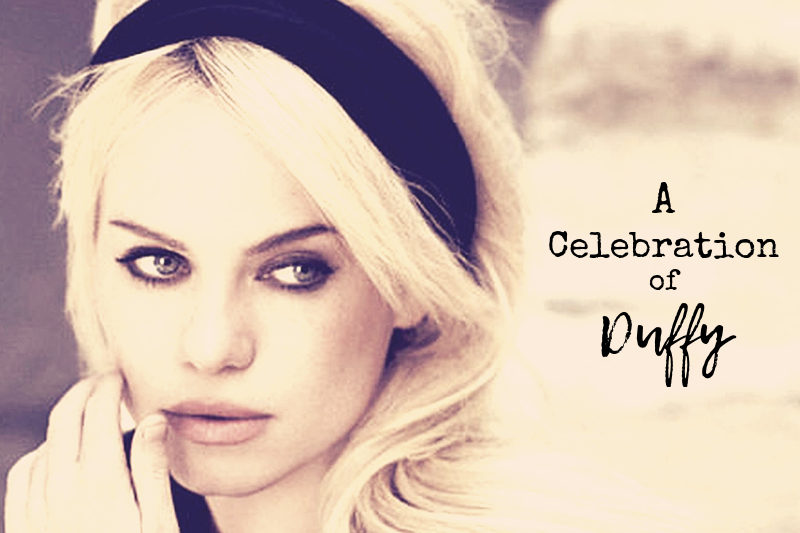 I talk about Whitney Houston pretty often on this blog (ranking her songs, covering one, reviewing films) but today I want to pivot and talk about a singer who was only briefly in the spotlight. Her presence, however, made an enormous impact on me as a singer and as a person. I’m going to talk about her incredible album “Rockferry,” give you some info on her life, and cover her song here in this post.

I included her Spotify playlist here if you want to check her out! I would call her either a soulful Britney Spears meets Billy Holiday, or a more upbeat Adele. If you’re intrigued, keep reading!

What Happened to Duffy?

I dislike questions like “what happened to so-and-so?” because it implies that they are only relevant if famous. Now that we don’t hear about them, something must have “happened” to them. However, this is actually pretty apt when discussing Duffy, as her career was ended seemingly by her own choice.

There have been several articles discussing her recently: This one from WalesOnline and this one from Smooth Radio, both asking what happened to her and where she’s been. But first, let’s talk about how we came to know about her in the first place.

Born with a twin sister in Wales, her parents divorced when she was 10 and she lived with her mother. At age 14, her step-father’s ex-wife was arrested for plotting to murder him, but I remember seeing something that she may have been a target as well. I can’t find that info anymore, so that might have just been a rumor. She ran away to live with her father, after which her mother and sisters refused to speak to her for a year. She entered a phase of rebellion, which hilariously included stealing a rowboat. I mean, sucks for the rowboat owner, but that’s probably the cutest theft story I’ve ever heard.

After entering college, one of her professors encouraged her to quit and become a singer. She then competed on Wawffactor, which is the Wales version of Idol or X Factor or The Voice or America’s Got Talent or The Four or CAN WE STOP WITH THESE SINGING SHOWS? I mean seriously. Anyway, she came in 2nd place to Lisa Pedrick, and I don’t even know if that’s the correct singer I’ve linked to there. She seems to have disappeared because googling her only brings up references to Duffy.

Duffy signed to A&M Records in 2007 and they began working on a retro-soul sound. She began performing on multiple BBC shows to promote the upcoming album “Rockferry,” and at this time was also signed to US-label Mercury Records.

“Mercy” was the first single released from the album, and it blew my mind when I heard it. Her voice is so unique, the song so vintage and yet so current. She’s also gorgeous, I mean look at her:

This single remained at #1 in the UK for 5 weeks and was the 3rd best-selling song of 2008. It had huge success worldwide and went platinum in the United States. It’s worth noting that she co-wrote every single song on the album.

My Life with Rockferry

I immediately became obsessed with this entire album. I knew it front to back and would rarely take breaks to listen to something else. At the time, I was in a tough relationship full of drama, highs and lows. Every song fit my life perfectly. The angry songs, like “Delayed Devotion,” “Stepping Stone” and “Hanging On Too Long” were perfect for my relationship despair. “Syrup & Honey” and “Oh Boy” were for the rare times when things were okay.

My favorite song, by far, was “Warwick Avenue.” It summed up everything I felt but was too cowardly to say. When my relationship finally, mercifully ended, I played this song a good five times a day.

I love imitating vocal styles. One of my first impressions was Billie Holiday as a toddler. It’s fun to analyze the placement of the voice to see how they make their sounds. With Duffy, I note some similarities to Holiday in the placement of her throat muscles. She constricts them pretty tightly and pushes it up. However, whereas Holiday keeps her placement in the back of her mouth, Duffy keeps hers up in her sinuses and around her nose. The result is audible and fun to try to re-create. Mostly I found I could better imitate Duffy when I was sick, because the placement was there anyway. Please note, this is NOT me trying to say I’m better than Duffy. I’m not at all and never will be. When you’re sick, your placement is different. Give it a try and see who you can sound like next time you’re stuffed up!

So, Duffy was huge. She performed at Coachella in 2008, won multiple awards, and became the face of Nivea. I bought a magazine just for the Duffy ads; that’s how big of a fan I was/am. However, she did a commercial for Diet Coke and people hated it:

To be fair, it’s a weird song choice (Whitney Houston’s Diet Coke commercial will always be the best anyway). However, I don’t understand how this could have derailed her whole career. I mean, Kendall Jenner still has a career after her Pepsi commercial, soooo…you know? It’s not a great commercial, but so what?

Well, her sophomore album “Endlessly” was about to be released, so this was a bad start to the promotion. Regardless, I was SO EXCITED for what I was sure would be another emotional ride from my new fave. The first single was “Well Well Well” and I was pretty underwhelmed, honestly. It seemed like they spent so much time trying to give her a vintage feel and now they were trying to undo it. Duffy has such a unique voice and I just really didn’t think it fit the song. It forces her into too high a register in the chorus and just sounds over-produced.

This article outlines the entire process of creating the album, and it shows where things went wrong. I’m not trying to dump more hate on her, because most people agreed with me about it and I really do love her. I don’t think “Endlessly” was her fault. I think they were unclear on the direction of it, they tried to make it too current rather than sticking with what worked the first time, and we all had such high hopes that it was hard to live up to them.

“Well Well Well” was the only single off of the album, but to be honest there weren’t many other candidates. “My Boy” was supposed to be the second single but was canceled. She had previously stated that she was on the verge of a mental breakdown, so I’m sure this new album didn’t help. Duffy canceled performances and simply didn’t show up to others. It seemed as if, by choice, she dropped out of sight. In Esquire she was quoted:

“Suddenly I was a product, an enterprise, a businesswoman. But mostly I wanted to be human.”

I really relate to every part of Duffy, including her vanishing from the spotlight. I know for a fact that I couldn’t handle fame, the constant criticism and scrutiny. Having an album that was widely criticized would be more than enough to send me into a breakdown. Hell, I have a breakdown if one client doesn’t like my work.

The Future For Duffy

I follow Duffy on Facebook and the last post she made was in 2017, which was just a share of an Instagram photo. She hasn’t been on either since then. She’s had a few acting roles here and there, but has remained largely unnoticed. Maybe that’s what she wants, and that’s okay. Maybe she just came to release the one incredible album that inspired so many people. That’s more than enough, and far more than I could ever hope to do.

I would love to say I hope she releases more music, or does a major film, or tours, but what I really hope is that she’s happy. If she didn’t enjoy fame, she doesn’t owe anyone her presence. If she didn’t enjoy music, she’s not required to make it. She’s given us Rockferry, and that will forever be more than enough.

My Cover of “Warwick Avenue”

I was recently thinking about Duffy, reminiscing on my past, and being so thankful for her presence in my life and that time. I wanted to pay tribute to her, so I made this cover. My goal was to sound somewhat similar to her, but retain my own style as well. I hope you enjoy it, but more importantly, I hope you’ll check out Rockferry!

How to Get a Great Bass Track for Your Song

An Interview with Sidney B