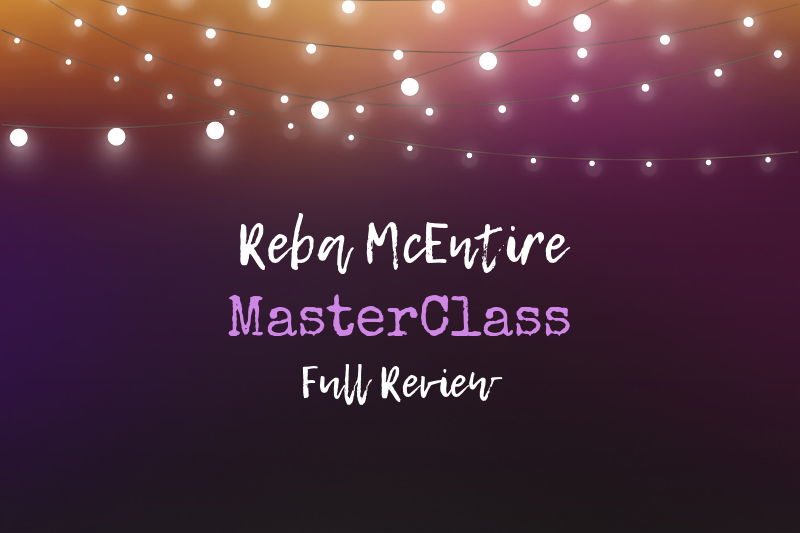 This is the final post on Reba McEntire’s Masterclass! If you’ve missed my others, you can find the full list here:

I’ve had a great time with this project and hopefully it’s been informative and/or helpful to you as well! This is an affiliate post with MasterClass, just so we’re clear, but I really love using it and I think you will too!

McEntire says a great attitude can make up for a lack of talent. “Be honest and truthful and nice to everybody” is her advice. She also recommends avoiding gossip, because it’s definitely going to spread. She says it’s something she struggles with, but you have to watch what you’re saying and who you’re saying it to.

One thing she recommends is being reliable, and I see a LOT of artists or session musicians who fail because they are completely undependable. Having talent means nothing if you don’t show up. A client is much more likely to hire someone they can count on with lesser talent than someone who is amazing but they never deliver on time.

Reba says when you find success, treat it gracefully. Money and whiskey bring out a true person, she says. That seems like it could be a song right there. Get at it, someone!

Growing up, McEntire listened to a lot of Merle Haggard, and she actually sang with her brother and sister in a group. She started with Loretta Lynn and Dolly Parton covers, until her mom told her to stop copying their style and do her own thing. I started the same way though, and it’s helped me tremendously as a session singer. I can do impersonations and have a video on it here (link), and I definitely recommend learning impressions as best you can if you’re doing session work.

Reba got her start session singing(!!!!) and that’s what led to her getting signed. The label didn’t like the song but liked her voice. I don’t know how common that is today, but it’s interesting to know her path was sort of like mine for a bit.

A lot of this lesson is Reba’s personal stories, which is really nice but not much I can talk about here without giving away her whole class. It’s super interesting and I recommend checking it out either way.

The class ends with an exclusive performance of “Does He Love You,” which is a duet with someone I don’t know. She looked super nervous, so I wasn’t sure if she’s a famous person or maybe a MasterClass intern who volunteered. She was good, but she stared directly at the floor most of the time, which is a big “no” according to Reba. After the song, Reba introduced her as Jennifer Wrinkle. Apparently she tours with Reba, but honestly she looked like she was about to throw up for the entire performance so it might benefit her from taking this class. She has a great voice but she pretty much did everything Reba suggests not to do.

This was a fun, informative and useful class! I’ve learned about a lot of performance tips, which I’m sure I will need at some point, however infrequently. A cool thing about MasterClass is I can go back to specific classes at any time. So if I have a show in a few months, I can revisit both Christina Aguilera and Reba McEntire’s Masterclass for tips I may have forgotten.

It was also a very interesting and illuminating look at the industry as a whole. There was a lot of great information for songwriters, which I did not find in Christina’s class. Christina Aguilera’s MasterClass is geared only toward singing and how to sing well, whereas Reba McEntire’s MasterClass encompasses a career as a single and all that entails. Both were great courses, it just depends on where you want to focus your energy currently. Whichever you decide to do, I think you”ll get great use out of them!

Here is my video for the final review:

Time for my affiliate plugs!

My Mission Statement – Why I Do What I Do