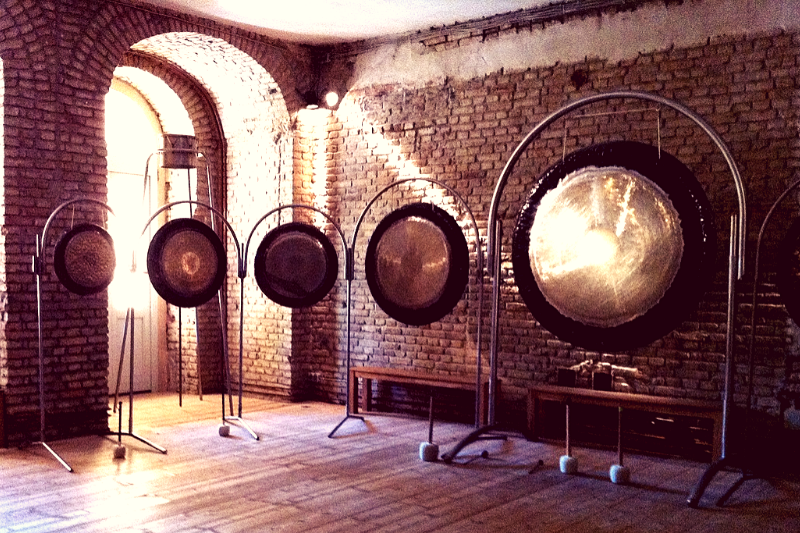 This week is officially “healing week,” with a string of health-related services I tried to test their effects on my singing.

If you’re new here, I do a lot of different experiments to see how my voice will react. I’ve tried cupping therapy, Christina Aguilera’s and Reba McEntire’s Masterclass, crystal therapy, and several others.

This week I did three mini trials of different things: a professional sauna, Reiki, and gong immersion therapy. There really wasn’t a ‘goal’ beyond trying each out and seeing what effect, if any, they had. I may revisit these at a later date and try them in greater detail as a bigger experiment, but for now let’s discuss my experiences with each!

Please keep in mind, I am not a doctor and I am not advising anyone to give up their regular medical treatment for alternative healing. I am a Type 1 Diabetic, so I’m definitely not throwing away my insulin. That being said, I think if you’re already taking care of yourself and want to throw a little holistic healing into the mix, you should explore that. Just be careful about it, okay?

My co-writer invited me to a professional sauna, and initially I was like “meh.” I’ve been in saunas before, in hotels. They’re usually stuffy and weird and you sit there in awkward silence with other questionable-looking hotel guests. Plus, this place was called a “Finnish Bath House,” which sounded shady as hell. However, I told myself I would try new things this year, so I said yes and met them there.

Right away, the experience was very different from a hotel. A relaxing lobby played meditation music and incense was burning near a large bookcase full of nature books. No one looked like they may have murdered someone in their hotel room a few minutes ago.

We were led into a private room where the heat was so powerful I felt like I might faint at first. Definitely hotter than any hotel sauna I’ve been in. It took some getting used to, but eventually I was able to breathe without feeling like my lungs were collapsing. I couldn’t breathe through my nose, it felt like razor blades slicing my nostrils open. Every once in a while, we would pour warm water on the rocks and the room would go up another ten degrees.

Now, I love being hot. A 90-degree summer day is perfect for me. This was so hot I kept sticking my arms in a bucket of cold water and left the room every once in a while to stand by a fan. If people aren’t as big of a heat fan as I am, I don’t know how they would deal with that.

By the end, I could literally feel my top layer of skin peeling off around my sides and shoulders. I…I think maybe that’s good? I’m hoping it’s good. I also felt like my shoulders broke out a bit, but it was gone the next day so maybe it’s just toxins escaping or something?

The Overall Experience of the Sauna:

Not bad! It was relaxing and fun, and not something I would have done without someone else asking me to come along.

The Sauna’s Effects on Vocals:

I definitely felt like my breathing was deeper and more intense, but by the time I got home, the cold winter air had pretty much returned my breath to normal. I feel like I’d have to do this regularly in order to see any lasting effects, but I could see it really helping if I could do it often.

I’m really interested in Reiki (I wrote about chakras and music in these blog posts). I know some people don’t like to call them chakras, but you can call them energy wheels or whatever feels right to you.

I entered an unassuming building and was greeted by a friendly, serene woman who guided me to a dimly lit room. There were several Himalayan Salt Lamps and peaceful music played softly. She informed me that there would be no talking until the end, as she liked to analyze each chakra and then tell me what she found later. I’ve had Reiki done before but we spoke throughout, so this was new to me.

I tried to turn off my mind and focus solely on the music, but of course my thoughts started wandering. What if she didn’t like me? What if she thought my clothes were stupid? The heated bed felt nice. I was scared to breathe too hard and have the crystals fall off of me.

At the end, she told me that she could sense I was stressed with my living situation (correct), and she recommended the Ketogenic diet for me. I’ve been wanting to try a diet specified for singers, so I’ll have to do more research into that because I don’t know much about it.

Then, this is where it got interesting, she said she felt a lot of groundedness and a sense of calm from me, and she recommended I look into sound healing therapy. Which is nuts because I was doing it the next day, but also how interesting that she would pick up on sound therapy for me! She said she could even see me teaching it and leading people to healing through sound. I love that idea and will absolutely look into it.

The Overall Experience of Reiki:

I loved it, I always enjoy a good Reiki session. Even though I’m nervous to go to new places, I left feeling relaxed. Also, now I have a lot of ideas to research.

I didn’t really notice a difference when I got home in terms of performance or style, but overall I felt relaxed, grounded and purposeful. I would say that anything a singer can do to feel those things is probably helpful!

I had heard about this for years and had always wanted to try it.-ththera-t I’ve heard about the benefits of gong therapy and I was looking forward to some healing. Since my co-writer took me to a sauna and I loved it, I decided I’d return the favor and invited them to this.

We arrived at another unassuming building, but inside there were about 20 gongs of various sizes spread along the wall. Beds and blankets were laid out in rows, and I noticed a fish tank against the wall. Do fish like gongs? I would think that would bother them, but I don’t know.

I’m going to be completely honest with you: I didn’t really love this experience. The gongs were incredibly loud (duh), but I felt so disoriented and jarred that I couldn’t relax or focus. When the gongs stopped playing (after about an hour), my ears were ringing so bad I couldn’t hear anything. I went to the bathroom to splash water on my face and thought I might throw up or faint.

My co-writer felt the same, and we both felt nauseous for the rest of the day and the day after. I feel like I’m just now getting my bearings (and hearing) back. It was strange. Everyone else in the room seemed to feel much more relaxed and enlightened, while we left feeling quite awful.

The Overall Experience of Gong Therapy:

Not great, honestly. I don’t know if I’m just a rare case, and I certainly don’t want to say something “doesn’t work” just because it didn’t for me. Still, I don’t think I’ll try it again.

I can’t speak for all singers, but I think musicians are very sensitive to sounds. The atonal and extremely loud ringing might affect us much more severely than others. So I would use this with caution. I also wouldn’t recommend doing this before a major singing job. It was several days before I felt like I could hear fully again.

My Favorite Alternative Therapy for Singers:

Sauna Therapy. If you have regular access to a sauna, I recommend taking advantage of it. I’ve seen some really fancy ones on Amazon that you can own. However, if you’re an average singer like me, this is out of the price range. I also don’t live close enough to one that I can make it a regular thing.

Reiki was my second favorite, although I don’t think it did much for singing. My least favorite by far was gong therapy, which sucks because I really did want to like it.

Have you tried any of these? Let me know how it went for you! I’m curious to see if you had similar or different results!

Why Everyone Should See “The Girls in the Band” on Hulu

My Best Days as a Session Singer