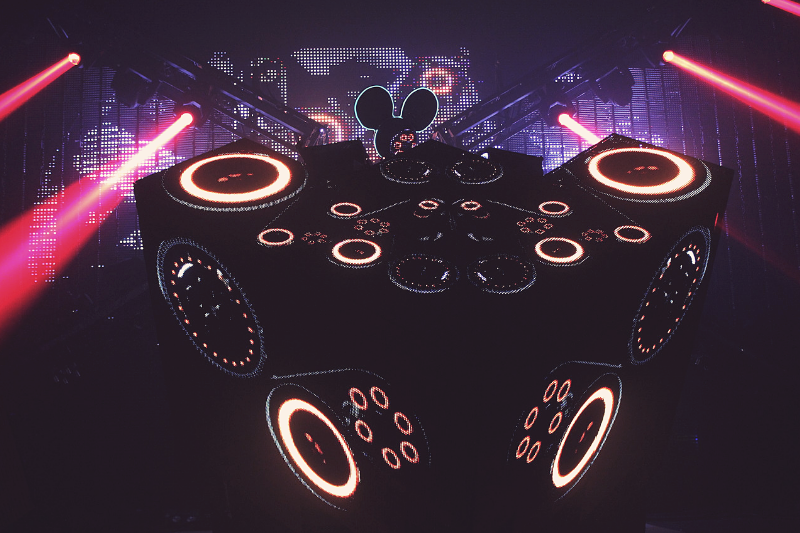 This is the second installment of my Deadmau5 MasterClass review (see part one here) (link). Today we are covering a few things but the main area of focus is on building your own home studio. I’ll tell you about mine and give you all of Deadmau5’s top tips!

This is an affiliate post, which means that if you choose to sign up using one of my links, I’ll make a small percentage of what you pay for the class. Your cost won’t change, but I’ll make a few bucks from your decision to buy through me. Thanks in advance if you decide to do it!

If you’re already taking the class, shoot me a tweet and let me know what you think of it!

We start the class with Deadmau5 saying, “You could do this in your fucking bedroom, you really could.” I think 90% of EDM producers would agree, no? That’s not a shade, I just think most of them at least start out that way. I mean, I’m a pro session singer and my vocal booth is in my bedroom, so I get it.

I work on my laptop because I need to be able to travel and move it around, but Deadmau5 works on a PC desktop. He also uses a DAC (digital audio converter) AISO PCI Card. I don’t know what that is. I guess it’s something like this but I don’t know if that’s the exact one. He says it should be a dedicated audio processing card and not one built into your computer.

In my previous post (link), I mentioned Deadmau5 uses Ableton Live. I use Logic Pro X, and I wrote a whole post on DAWs if you need more help with them (see that here). Deadmau5 and I agree that whatever DAW is best is the one you’ll learn and use well. It just depends on what is a good fit for you.

Access Virus TI is the first hardware Deadmau5 bought, but he recommends waiting on hardware because you don’t really need it to get started.

Deadmau5 uses ATC’s which are super expensive, but he says you don’t need that, you only need monitors you know. I mean, I don’t know any of them so I guess that means I don’t need any? I send all of my vocals out to other producers so I’ve never really thought I needed any. Maybe I should look into it?

He also mentions protecting your ears. He mentions the “frog in the boiling water” tip – if you put a frog in a boiling water pot, it will hop right out. If you put it in warm water, it will stay there until it boils to death (but don’t do this, it’s mean). Your ears are similar. Your ears will react negatively when you enter a really loud room, but when you gradually turn it up, your ears will adjust until you are doing serious damage.

It’s About Your Ideas, Not Your Gear

This is something that is SO IMPORTANT and everyone should know. You can make something amazing with free gear you got off of Craigslist. You can make hot garbage with the most expensive equipment money can buy. Don’t worry about spending a lot of money until your ideas are great.

This is also a red flag for things to watch out for with producers and studios. If they brag about their gear a lot, they might be overcompensating. Just saying.

Deadmau5 is really funny in a ‘not-trying-to-be-funny’ way. He starts off the melody lesson by saying, “I’m not like fucking, you know, what’s-his-name from the Beatles.” ARE YOU TALKING ABOUT SIR PAUL MCCARTNEY? Because lol, that should totally be his new name.

He says this to say that songwriting inspiration comes to him differently, but it’s just a funny way to say that.

Your melodies need to resolve, and you’ll know if they do by the ‘feel’ of them. If the melody ends on a weird feeling, it probably isn’t resolved. He talks about ‘closing the loop’, where you make sure the 8 bar cycle needs to resolve between the end and the beginning.

While watching Deadmau5 work, you really get the sense that he knows what he’s doing. He doesn’t play any instruments, but he is a true musician and it bothers me that people don’t see that. He’s not playing a fiddle, who cares. He’s taking a computer and creating a whole song from it. He’s a musician, a composer and a songwriter and I will hear no criticisms on that. If you disagree, I really recommend watching the videos and seeing him work. You’re watching a genius create a masterpiece.

He uses a “drone note” or one long sustained note, and builds around it. He builds chords around it and adding a beat later. This is really interesting and I’m going to start doing that for my video outros.

A lot of this class is again watching him fiddle around with computer things, and again I think that’s fine if you are following along on Ableton. If you’re not, I recommend just putting his tips to use in your own DAW. MasterClass also has homework assignments for each lesson that will help you along. You can also go to the bottom left of your screen and hit the “2x” button, which will speed up the video parts where he’s working.

Here is my video on this week’s lesson, including a tour of my own studio:

And now, here are my affiliate links if you’d like to take the Deadmau5 class with me!

Here is the general link for MasterClass, so if you want to sign up for any class at all, you can still do it through me and I would greatly appreciate it!

MasterClass makes a great gift. If you have a musician in your life who would like the class, you can buy it for them here!

The Taurus Musician: How Your Zodiac Sign Affects Your Music