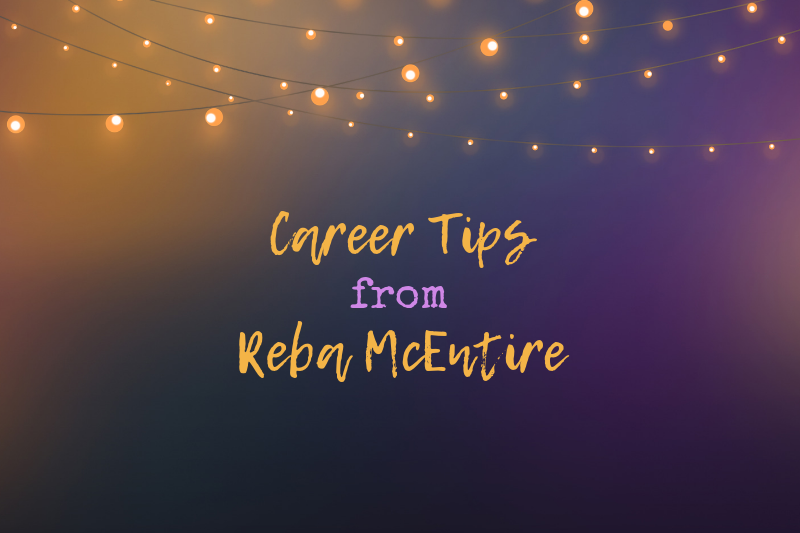 This is the second-to-last week of my Reba McEntire MasterClass review!

Here are the parts to the class if you’ve missed any:

One more to go; hopefully this has been helpful for you! This is an affiliate project, just so you know, but I love MasterClass and I think you will too!

Today’s topic is about building a career. Reba has some great tips that I think you’ll find useful if you’re trying to have any type of career in country, or any music industry.

How to Succeed in Country Music

Longevity is hard in any job, but especially in the music business. Reba’s advice is to stay current on what pertains to the new generations that are buying your music. Know the artists you’re in competition with. Know who is on the radio and who hasn’t had a number one hit yet. The more educated you are about the business, the better you’ll be. If knowing all of this is too overwhelming, a business manager can help you with most of this.

As an introvert, networking is my worst nightmare. I also have pretty bad social anxiety, so I just feel like everyone is annoyed by me and I shouldn’t be there (and that might be true, who knows). However, networking in music is super important, regardless of what you’re trying to do in the industry. Reba suggests knowing when to stop talking, don’t annoy people, and know when to make a graceful exit. I’m sure she’s saying this from personal experience. I mean, can you imagine how many people try to “network” with her and drive her crazy? Haha.

I was just on a music conference call and one person dominated the entire call with inane conversation about nothing, so it was really pointless and a waste of everyone’s time. Don’t do this in networking. Respect other people’s time, and know that a little bit of mystery goes a long way. I now know this entire dude’s life story, and I don’t know anything about the other people on the call. Don’t be that guy.

Reba stresses that although the music industry is creative, it is also a business. I totally agree and I’m ALWAYS telling everyone that. She says don’t blow all of your money on tour. It may be fun, but it’s also your livelihood.

She says always know where your money is going. If you don’t know, ask. Talk to your manager and accountant.

Dolly Parton told Reba McEntire she will never retire, “because I won’t find a job I like better than this one.” Also…Dolly Parton makes like a trillion dollars an hour, so it’s not like she’s going to need to become a Walmart cashier or anything. Same with Reba, but the point is they both have a great work ethic. Being a hard worker and professional is important and crucial to making it.

Your fans are the reason you exist as an entertainer. Reba realizes this and is so grateful for them, which is cool. She says you have to give your fans what they want: Your personality, great material, and loyalty. Reba says to respond to them when they write you. It’s easier today with social media, but she used to hand write letters to fans. Engage with them, tell them pieces of info about you.

Go ahead and tweet something personal to your fans!

I wrote a post about this here (link), but there is a LOT of cruelty in the music industry. You’ll get a lot of bad news in your career. Reba says her upbringing prepared her for this business, because when people scream and yell at her, she’s used to it from raising cattle. Do…cows scream at you? I didn’t raise cattle, so i don’t know what she means. Maybe she got yelled at by other cow people? I don’t know. Anyway she says she has seen and heard it all and you have to just deal with it.

She reads every review about herself (so I really hope she’s reading these – Hi Reba!!! I’m enjoying your class! Also please let me write a song with/for you about being a redhead because I have SO MANY).

If you’re an “indiepreneur” like me, or a “solopreneur,” you’re going to do a lot of the industry work yourself. Reba says she used friends and family to help, but I don’t know if that’s possible for all of us. I know I have some friends who will help if I ask, but they’re all so busy and hustling themselves. I think it might be best to find an actual team of people who you pay, but then of course we’d all have to be making enough money to do that in the first place.

In terms of Reba’s team, she likes to work with people who are fun, creative, honest and loyal (Hi Reba, I am all of those things!) and it’s so important to make sure you can rely on people you work with.

I’ve never had a manager, but Reba has had several and says that the best manager wants what’s best for YOU and will guide you toward the best moves for you specifically. Look for a new manager if you feel they aren’t that interested in your goals. If you don’t feel like a priority and you feel like your career isn’t growing, you may need a new manager.

Reba recommends that whenever you leave any situation, try not to burn any bridges. That may not always be possible, but it’s important to try nonetheless. The industry is quite small and you never know who you’ll meet again.

She also says to make sure your team is tech-savvy. People today need to know how social media works, they need to stay on top of trends.

In my post about the student sessions, I talked about how the women dressed exactly alike. I get it, this is what’s current in the country industry. However, Reba doesn’t follow that mold, and neither should you if you’re trying to stand out.

I wear my “session singing outfit” which is basically yoga pants and a sweater, but when I perform I go all out. I definitely recommend being comfortable and so does Reba. She says you need to know you look good so that you’re not worried about it onstage. Get a stylist if you can. If you’re a performer, you won’t really have the luxury of going out in yoga pants unless you want it all over the internet about how you look like a slob. Which…this is totally unfair and stupid and I hate that society does this, but that’s the way it is unfortunately and it’s yet another reason why I’m happy to not be famous. If reporters don’t like my yoga pants they can kiss my comfortable ass.

McEntire talked about sex appeal and how her image is “tough sexy,” but she says that you need to know how far you want to go. There is obviously a wide range of sex appeal level with singers, so you’ll need to know where you feel comfortable. She says confidence is sexy, so as long as you feel confident your sexiness should come through.

Reba mentions her red dress from the CMA awards in 1993, which I didn’t remember (or even know about probably) but she wore it again this year and killed it! I don’t think this dress is too sexy, especially by today’s standards, but I don’t know what the dress code was like in 1993. I assume this was a lot more daring then. Either way she looks great then and now.

We finish by going over Reba’s looks over the years, which was amazing and fun. She has a lot of great memories and stories, and it was interesting to see how she made the decisions she did.

Here is my video about this week’s lesson:

Time for my shameless affiliate plugs!

Soprano Session Singers: Where to Find Them and How to Become One

How to Read a Music Measure: Sheet Music for Beginners