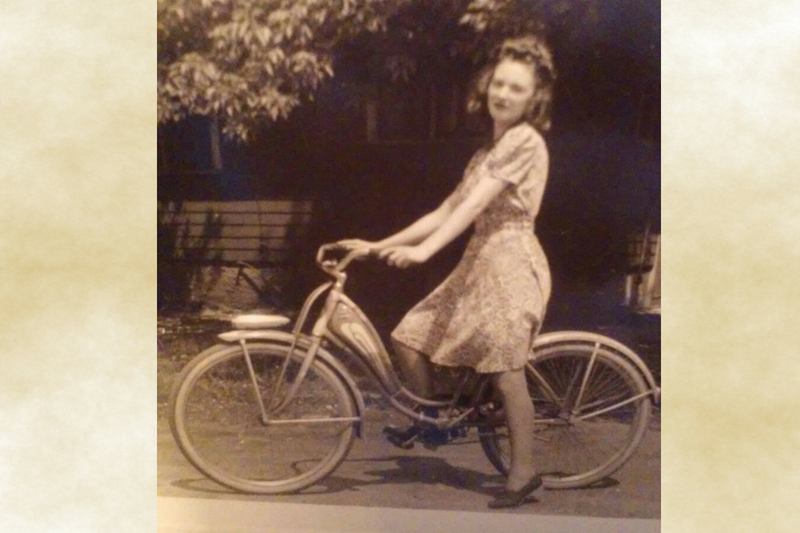 I usually try to write posts that appeal to everyone, but today I’m going to get personal.

My grandma died last week. Today would have been her birthday. She died on July 4th (“Just like her to go out with a bang,” my uncle said). Granny and Gramps raised my brother and me. She was my last living grandparent. There was no final goodbye, as she was unconscious during her last few days. I touched her hands and she made a sound; that was the most interaction we could have at that stage.

My cousins and I have to go through her jewelry. That woman LOVED being fancy. Earrings, necklaces, rings, painted fingernails always perfect, hair and makeup flawless even in her 90s. I will go through her things, make plans, and I will keep going because that’s all I can do. That’s all any of us can do.

Francis Poe was born in Indiana in 1922. She didn’t have indoor plumbing until she was 18. My grandfather went to grade school with her and told everyone that he was going to marry her someday. She said, “He would sit there and just STARE at me, all through class. I was so annoyed! I wished he would just turn around!” 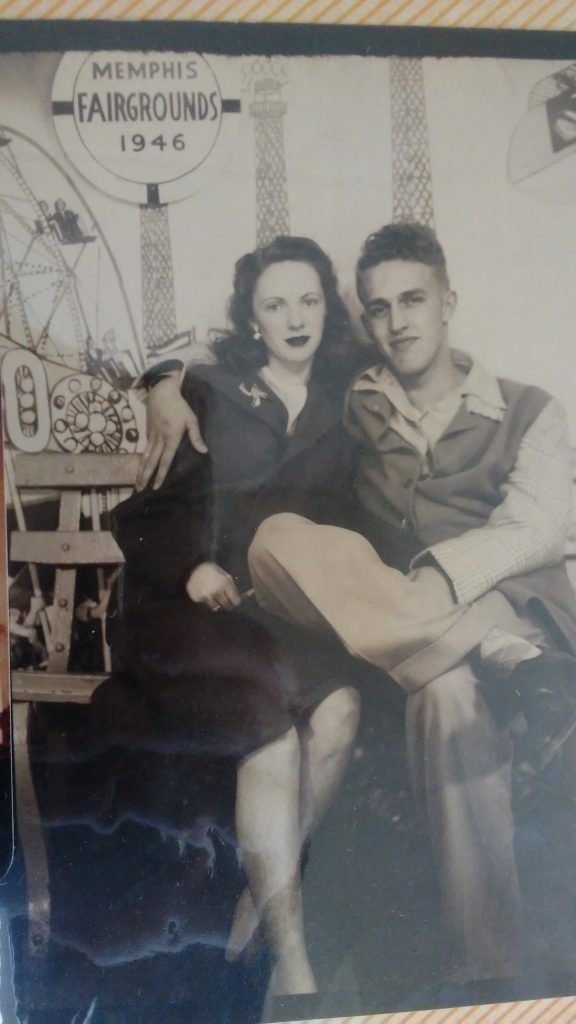 What a cute couple though, right??

My grandmother is one of the main reasons I do music today. She was an organ player and would play songs for my brother and me to sing and dance. When I first started imitating Billie Holiday, she encouraged that hobby. When I wrote dozens of terrible songs in her basement, she listened to them all and pretended they were great. She encouraged me to keep going. She told me to ignore the haters (not in those words, but still). My grandma had plenty of haters in school, as she was the prettiest one there.

My grandparents got married before my grandpa left for World War II. She worked briefly as a phone operator, but couldn’t figure out the switching fast enough. Working at a department store was much better and she was promoted to management. My grandpa came back and she quit working. They had two sons and ten years later had my dad. Twenty years after that, she had me and my brother to care for. Ten years later, my grandfather slipped into the black hole of Alzheimer’s Disease and she took care of him.

Although caretaking was her primary role throughout her life, I don’t think it’s ever what she wanted to do. I think she did what was expected of her during her time, and did “the right thing” when it was required. She told me she used to act on stage and had even sung on the radio. Maybe that’s what she wanted to do. She was stunningly beautiful; maybe she wanted to model. Whenever I would ask what she really wanted out of life, she would shush me and say, “I did what I had to do and that’s it.” It was almost as if she couldn’t bear to think of the life she would have had if she could. Or maybe she was protecting me because she thought I would feel bad.

The thing is, I did feel bad because she wasn’t always good at hiding it. I saw the heavy sighs, the eye rolls, the times when she picked her head up and steeled her gaze and said, “I’ll take care of it.” I saw her frustration and I saw when she would take her anxiety medicine, even though she thought no one saw. When she would finally get a moment to herself, she did nothing but sit and stare vacantly. I thought maybe that’s what she liked to do best.

When my grandfather died, my brother and I were out of the house and into our own lives. All of her caretaking roles abruptly stopped at once. She finally had nothing to do.

I hear stories of someone dying right after their significant other dies. That didn’t happen physically, but I think my grandma died a little mentally. There were no clothes to sew or wash or fold. Dishes were easy with only one person. She had always seemed to hate cooking, and when we were all gone she stopped doing it entirely. Frozen meals and cereal were her sole diet for years.

The family encouraged her to get hobbies. She was still relatively young then. She could have tried anything. Meet some other ladies for bingo, try senior water aerobics. She sat in her chair and watched TV, and that was it. She continued to do that until that was all she could do. Over the years, she slowly lost her ability to walk. A cane became a walker, and then a wheelchair.

If I learned one thing from watching my grandma deteriorate, it is to move and continue moving, no matter how old you get. “Use it or lose it” truly applies here. This goes for mentality as well, but I think staying physically active keeps you mentally active. There are 80-year-old ladies doing yoga and bodybuilding, so it’s definitely possible if you want it. My grandma just didn’t want it. Didn’t see a point. Her role, as far as she saw it, was done.

The last year was a steady decline of her mental abilities. I moved to Nashville and every time I saw her, she remembered who I was less and less. That was okay. I had already dealt with this with my grandfather, so I understood. I was just happy to see her again, to take her to the lake and hear her talk about her life now. We saw a snake once; she absolutely hated those. We watched the ducks and talked about the weather. It was easy now. I could take care of myself. 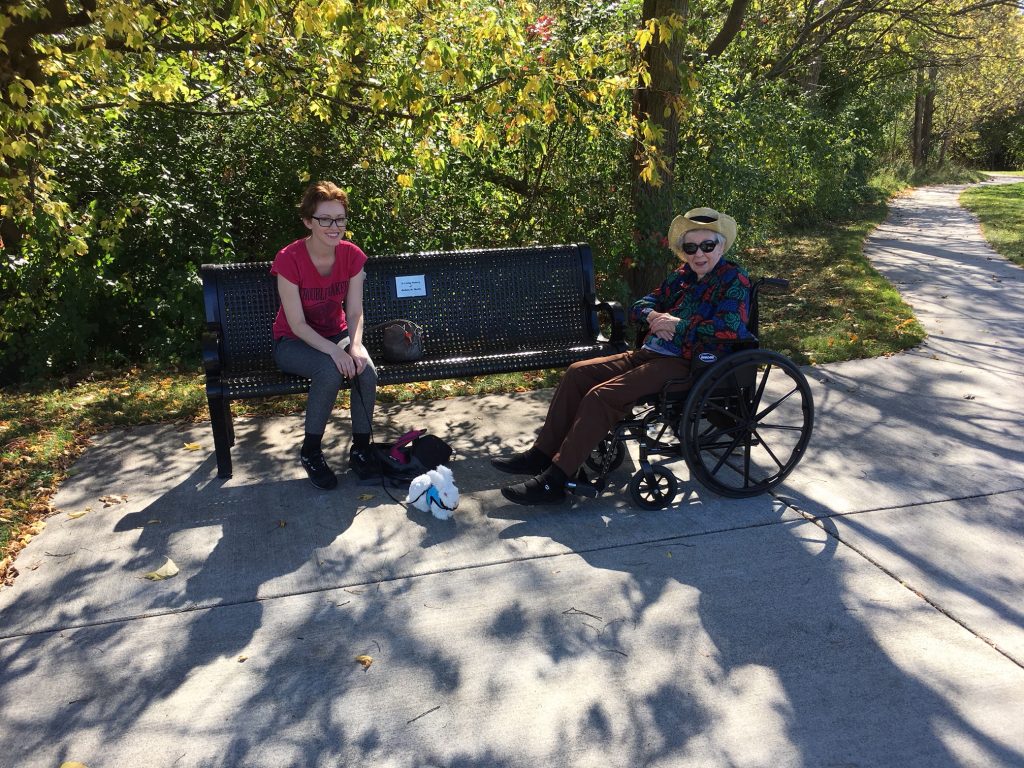 I took my rabbit to visit her at the nursing home. Yeti was a big hit with everyone. If you have a pet and some spare time, nursing homes love when animals visit!

I don’t know what the point of life is. I don’t know if her calling truly was caretaking, or if she missed it somewhere along the way. What I do know is that whether or not it was her calling, she was damn good at it. She may not have liked it all the time, but she did it because it had to be done.

There is a part of my grandmother in every note I sing. There is also a part of her in me whenever I have to get something done, regardless of how I feel about it. “I do what I have to do and that’s it.”

I don’t know the point of life. Maybe there isn’t one. Maybe we’re all just here, and whatever notion we have of a “life’s purpose” is something we created. Life rarely makes sense. It’s tragic and brutal and boring at times. It’s frustrating and terrifying. You get from one day to the next with barely any sense of why you do anything, or why it matters.

My grandma had three sons, six grandchildren and countless great-grandchildren. She was not alone in her final hours. Maybe that’s why it matters. Life is confusing and awful, but it’s also beautiful and interesting and wild. There are fleeting moments of peace and security. You’ve got to take hold of those things and carry them with you in times when you don’t know why you’re here and don’t want to be here. Most of all, you’ve got to do what you have to do, and maybe that’s it.

Christina Aguilera’s Masterclass – Does It Really Work for Vocalists?

How to Avoid Getting Scammed in the Music Industry

Revisions for Clients: Getting the Results You Want from Freelance Creatives