An Interview with Sophie Rose Page 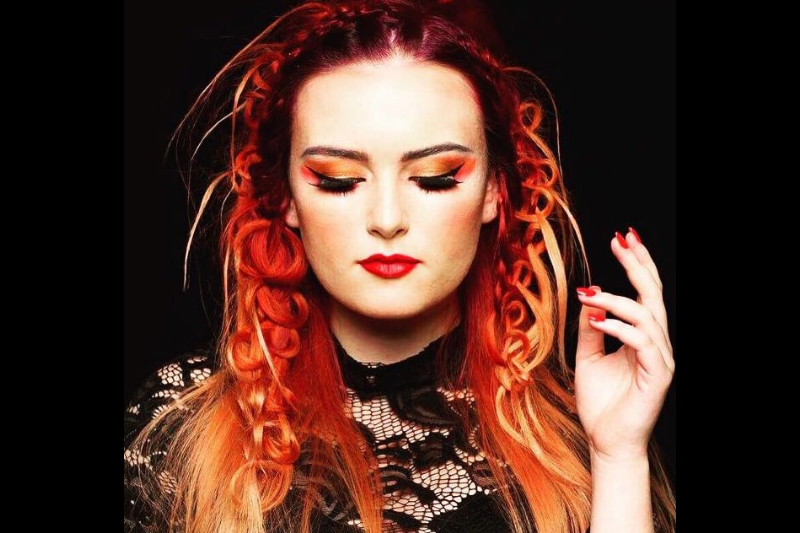 I’m so excited to introduce you to Sophie Rose Page, although you may have heard of her already. This phenomenal young talent has been on BBC News and was a UK Unsigned finalist. I’m lucky to know her personally and I’m grateful she had a few minutes to talk with me! I hope you enjoy her answers, I think you will!

Okay so first, let’s talk about “Dark Age,” which has blown up! How did that song come about?

“Dark Age” was written in December 2017 when my producer Jan (Janski) Lindvaag sent over an idea he had for a song which I then wrote Dark Age to. I already had some of the lyrics written down in a journal however it all came together on the track! He flew over to England (from Norway) and we recorded it on his laptop (all the equipment fit inside his hand luggage!) at Dance Attic (Fulham) in about an hour.

I LOVE that you made the music video for under $20! I’m a big fan of DIY videos myself. What inspired the video?

Thank you! The video itself is a very abstract concept but it came from the lyrics of the song. I felt like I was, to quote the song, ‘living in a dark age’ so I knew the video had to have a dark theme. I wanted to do something really simple (mainly due to my budget) but effective and somehow after making tons of mood boards I came up with the idea to cover ourselves [Sophie & her friend and makeup artist Rafal Podfígony] in UV paint and see what happens. There’s a wolf animation that flashes up through out, it represents being a lone wolf which is how I felt at the time of writing the song.

Very cool! Obviously, music doesn’t become a hit without hard work. What was your promotion strategy for “Dark Age”?

Well the promotion of “Dark Age” was definitely a learning curve for me. Mostly I was just lucky with the amount of support that I got from friends and family. My plan at first was to just “put it on YouTube & Spotify” but I quickly learnt that so much more than that was actually needed to go into it. But now I feel positive that the next one will have a lot more preparation before I release the song!

How did you get on BBC news? (Congrats by the way!)

Pure luck. I had been tweeting about the release of “Dark Age” and it just so happened that it was seen by Katharine Da Costa who covers BBC South for my local area. She tweeted me asking to call her and I was literally shaking, I thought it was a prank until I called and her assistant answered!

So when I spoke to Katharine about how she found me she actually said it was because I used location tags on Twitter, and she was going through the location and found me through that!

What advice would you give other artists looking to market upcoming releases?

DO YOUR RESEARCH. I wish I’d learnt about how important Spotify play listing was and had contacted playlist creators and blogs etc before I released it.

You and I met in our Musician Cell Group – have you ever had a mentor or coach before? If so, what was your experience like? If not, how has the Cell Group helped you?

Love our Cell Group! I have actually, my mentor for the last year and a half has been Louise Porter who discovered Alesha Dixon and put together Mis-teeq. She’s been great at developing me as an artist and also hooked me up with my producer for “Dark Age,” Jan (Janski) Lindvaag who is one of the nicest people I’ve ever met!

Also our Cell group has helped me so much, being a “DIY” musician can be so lonely so having people to talk to is so great it’s almost like having Colleagues that you can talk to about anything with.

Let’s talk about UK Unsigned (I’m unfamiliar with it and I think most of my readers are American) – what was that experience like?

It was such a fun competition to be involved in! The final was at The Institute Of Directors in Pall Mall which is definitely the most prestigious venue I’ve ever performed at. I got such great feedback and encouragement from the judges and the audience too!

How far did you make it in the show?

I got to the Finals where they announced the winner (Jessica Strode) but that was all.

In one of our Cell Group meetings you mentioned having a close connection with fans (sending Christmas cards, etc). Have you ever had a fan get “too close?” I feel like this is something almost every female artist deals with at some point, so if you haven’t yet, how do you think you’ll handle it?

I love the people who support me! So far a lot of the support has been online, so no ones got “too close” in person. I have received some Poems and drawings of me which was really cool. Honestly I don’t know how I’ll handle it if it happened. Often how I think I’m going to react in a situation is the opposite of how I actually do in the end.

I saw that you were doing a fundraiser for the Orangutan Foundation in Borneo. That’s so cool! I actually was in a competition to get a free trip to go there by inventing a toy for the Orangutans. My idea was basically a giant bird toy, but the one that won was a huge ice cube filled with different fruits. If you had to make an orangutan toy, what would it be?

Wish I’d seen this competition! One thing that makes me so sad is how many orphan orangutans there are; so maybe some sort of heated pillow that the orangutan baby can sit in that recreates the hug of their mother. A sort of comforter to the baby orangutan. I’m not sure that’s a toy though… hahaha!

You covered a Post Malone song on your YouTube channel. If you had to get a face tattoo, what would it be and where would you put it?

Well if I had to… a giant Orangutan taking up all of my face (in colour)!  If I’m getting a face tattoo… go hard or go home.

You’re close with your mom. Would she approve if you started dating Post Malone?

… He’d have to get through my Uncles first!

Okay, one last silly question 🙂 Tell me a funny story about music!

When I was 15 I went backstage at a One Direction concert and it was probably one of the coolest experiences ever. During Jamie Lawson’s soundcheck I got to go round the empty arena. During this, Harry Styles walked in with his Bodyguard and I literally nearly cried. In fact I don’t think I actually said a word during the whole time I was taking a picture with him. He was having a conversation with the people I was with (even the little kids managed to talk to him) but I just froze. I couldn’t speak. Really embarrassing actually! I was okay by the end of the concert though… In fact, after meeting a bunch of celebrities in the VIP I got quite a bit of confidence, maybe a bit too much! After the concert I ran backstage and managed to almost “jump” Niall Horan and beg for a selfie.

What projects do you have coming up this year?

This year hopefully I’ll be releasing a whole bunch of new material. One song I am particularly excited to release. I’ve also applied to perform for various festivals. Hopefully I’ll be able to officially book some dates very soon (check out my website for updates)!

They say that to have a great career, you should “do something that terrifies you.” What part of the music business terrifies you and how would you like to overcome it?

At the moment the thing that scares me most is the business side of music. I’m not very good at all the legal “stuff.” I’d much rather sit around and do the fun bits! But until then I guess I’ll just have to keep doing my research and learning at every opportunity.

Thanks so much to Sophie for being here! If you enjoyed her interview, please let her know!

An Interview with Amy Connerley

An Interview with Sidney B

The Pisces Musician | How Your Zodiac Sign Affects Your Music