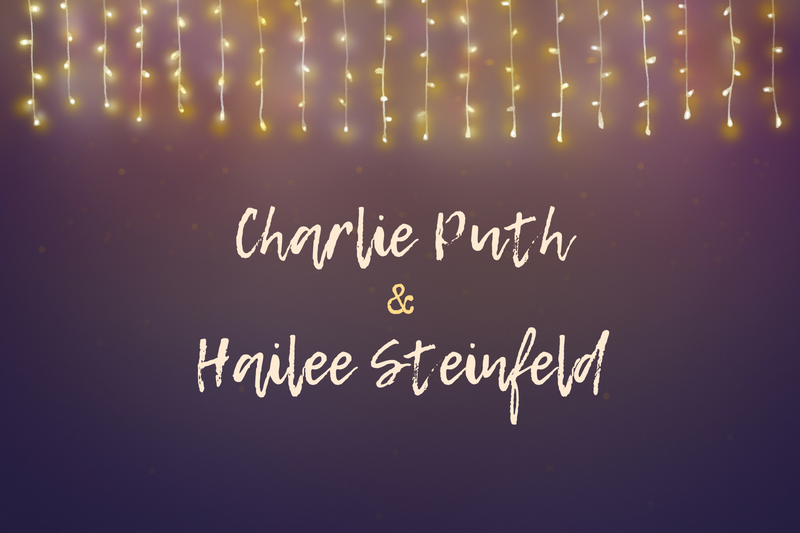 I was in Detroit for my grandma’s funeral, so I decided to stay the week and catch up with friends and family. I also decided to see Charlie Puth and Hailee Steinfeld, so let me tell you about how that went! 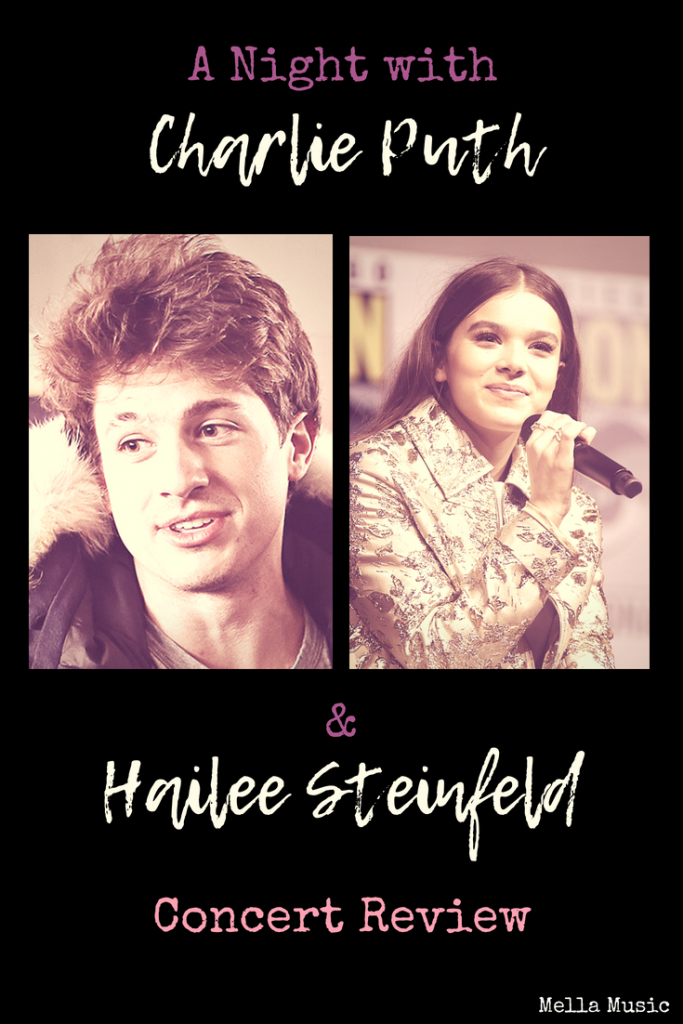 DTE is a great outdoor amphitheater. It claims to be “in Detroit,” but it’s actually pretty far out of Detroit in Clarkston, MI. I’m sure most major cities do this, where people anywhere within a surrounding 100 miles claim to be from that city. I do it in Nashville, and I do it in Detroit also. It’s not meant to claim ownership of the city; I just do it to avoid confusing people when talking about where I’m from. Anyway, DTE is great and they bring in a lot of awesome artists. It’s where I saw Kesha and Macklemore as well.

I went with my co-writer again and apparently he didn’t want to be seen at this show: 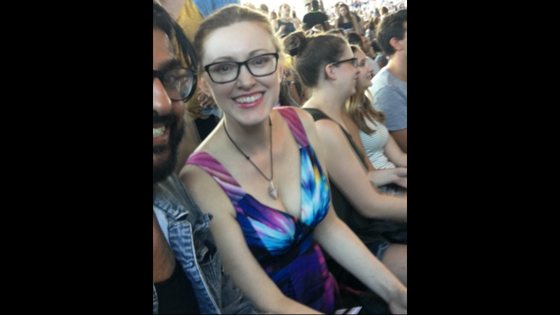 Too bad I’m posting it here on my blog then!

I’m a huge fan of Hailee. Does her fan base have a name? The Hailers? Anyway, I’m a big fan and I was really excited for this. Her dancers came out first and they were great, very high energy, but they really didn’t have a lot of room to move around because all of Charlie Puth’s band equipment was already out. 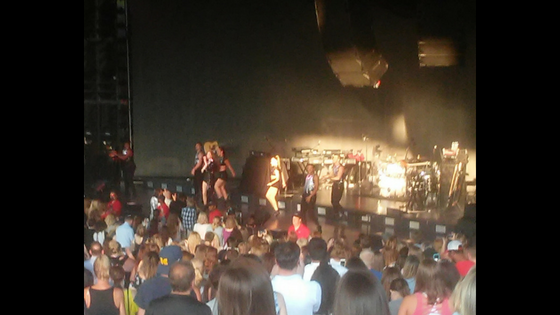 They had a solid 5 feet of stage space to work with.

I don’t know if it was due to the tight space or what, but it was hard to tell if the dancers were good or not. I have no right to judge because I’m really terrible at learning dance moves, but I’m also not touring with major acts. Anyway they did their thing and Hailee was in the middle and tried not to get kicked in the head. She looked incredible and she’s just as pretty in real life as she is in movies: 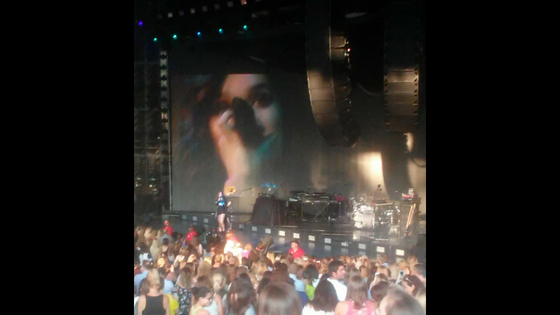 Everything she wore was glittery and amazing

It was sort of frustrating because the stage was not used at all. She didn’t have a band, she just sang to backing tracks. I totally understand that she may not have the tour budget for all of that, but even looking at my terrible phone photos you can tell it just looks like her band forgot to show up. Like, throw a sheet over that stuff at least, right?

She sounded great, but I couldn’t tell most of the time if she was lip-synching or not. The sound was almost too good, if that makes sense. Typically when you have a live microphone, the sound will vary depending on whether you’re moving around or how close you have it to your face. It didn’t seem to change much depending on what she did. I could be wrong, but I thought maybe her mic was live but was turned way down. There were parts where she did an adlib or something and it sounded very quiet over the track. I’m not judging, because a national tour has to be tough on the voice and I know these singers work hard. Plus, at least she made an attempt to look like she was actually singing (more on that later). 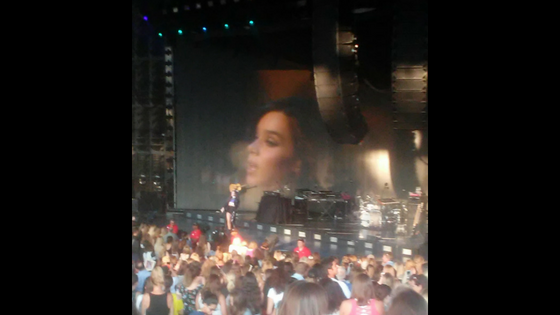 She doesn’t have a ton of songs, but she sang all of the ones that have been popular as well as a few from a previous album I didn’t know existed. I’m excited to check it out. She also mentioned that she is working on new music and she sang a new song that sounded great. She closed the set with “Let Me Go” and I was really happy because I love that song. 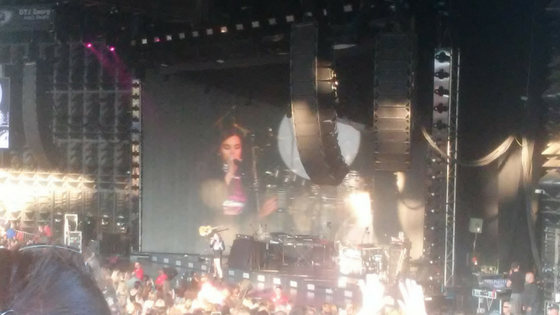 Finally remembered to turn my phone sideways for a better pic

As soon as she left the stage, the crowd went nuts waiting for Charlie Puth. What are his fans called? Puthers? Whatever they are, they were out in full force that night. I’m definitely a fan, I think he’s incredible, but I’m not a 13-year-old girl pulling my hair out in excitement. When he came out on stage, people went absolutely insane. 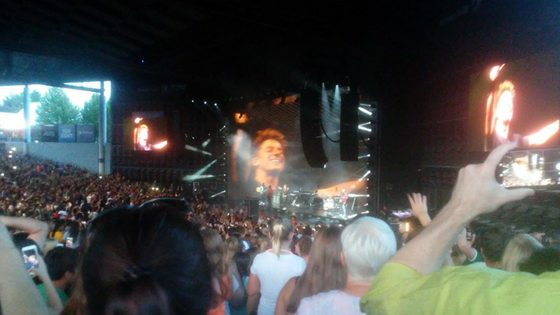 Clearly he didn’t mind the screaming

Okay so, here’s the thing: Charlie Puth is undeniably talented. He’s an amazing funk-pop songwriter, he has a great voice and he can play the piano really well. That’s why it was confusing and sort of irritating that he was very obviously lip-synching the first two songs. He wasn’t even trying to pretend like he was singing (which is why I said I appreciated Hailee’s effort earlier). He would put the mic down for entire phrases, all while the voice kept going, then pick the mic back up and resume lip-syncing with no change in sound whatsoever.

Again, I understand that touring musicians have a lot of strain on their voice and lip-synching may be required at times, but could you not act like you’re actually trying? The audience didn’t care at all so I guess he didn’t either. There were spots in the recording where the voice was cut out, but he usually did one of two things: hold the mic out so the audience could scream/sing, or hold out one powerful note for a really long time. He did that on almost every song, just one long note and hold it until the screams drowned it out.

Eventually he picked up a keytar and started playing, and it reminded me that he is truly an amazing talent: 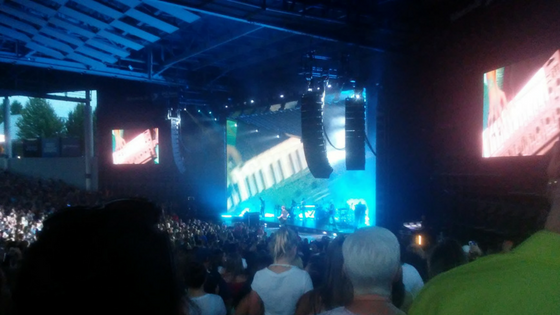 I’m 99% sure he was actually playing this

There were two other times I was reasonably sure he was actually singing. One was just him playing piano and singing “Marvin Gaye,” (I was hoping he’d bring Hailee out for that but he didn’t), and a guitar/voice duet for “Change.” Those were very intimate songs and it did seem like the volume varied throughout the song, so I would say that was real. During “Change,” the venue held up phone lights and it looked amazing: 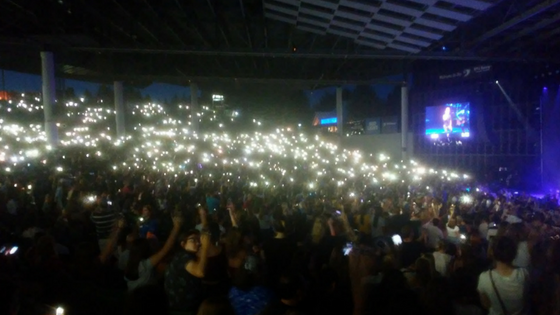 No one has lighters anymore because all the kids are vaping I guess.

All in all it was a great show and I had a good time. My biggest pet peeve was the lip-syncing, and again I don’t even care if they do it. Just don’t let us know, since we paid to pretend to hear you sing. They’re both obviously talented so it’s not like either of them need to prove anything, I just would have loved to not know it wasn’t real.

If you’re a performing musician, here’s what I would suggest as a learning experience from this show:

Are you a fan of either of them? Are you a Hailer or a Puther? Do you have a better name (or the real name) of their fanbase? Let me know any of these or tell me about your favorite and least favorite concert!