My Night With Fleetwood Mac 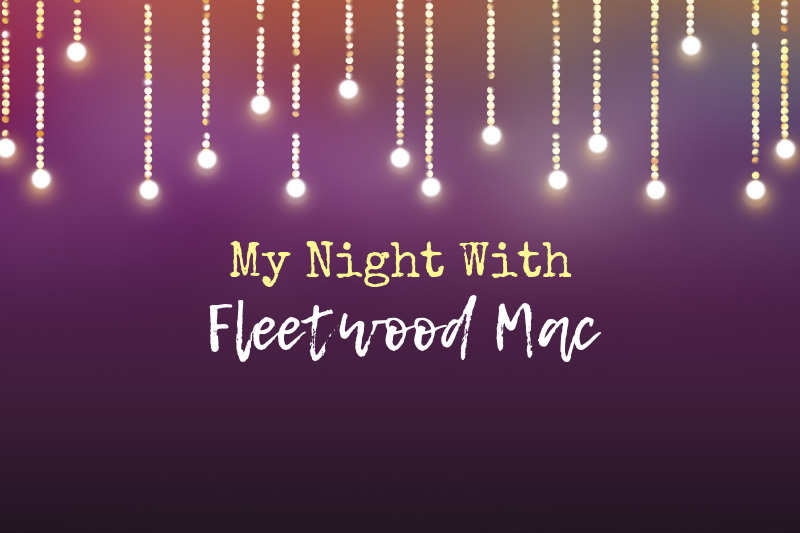 YOU GUYS I DID IT. I SAW FLEETWOOD MAC LIVE. I can die now.

A few quick facts about me: I love Fleetwood Mac, I love Halloween, and I’m big into magic/numbers/metaphysical shit. So get this:

Last night was October 30th, Fleetwood Mac’s 13th show. Stevie Nicks the night before Halloween, show 13. My seats were chosen specifically by number as well. The show was pretty expensive, but well worth it. I had such a great time and I can’t wait to tell you all about it! 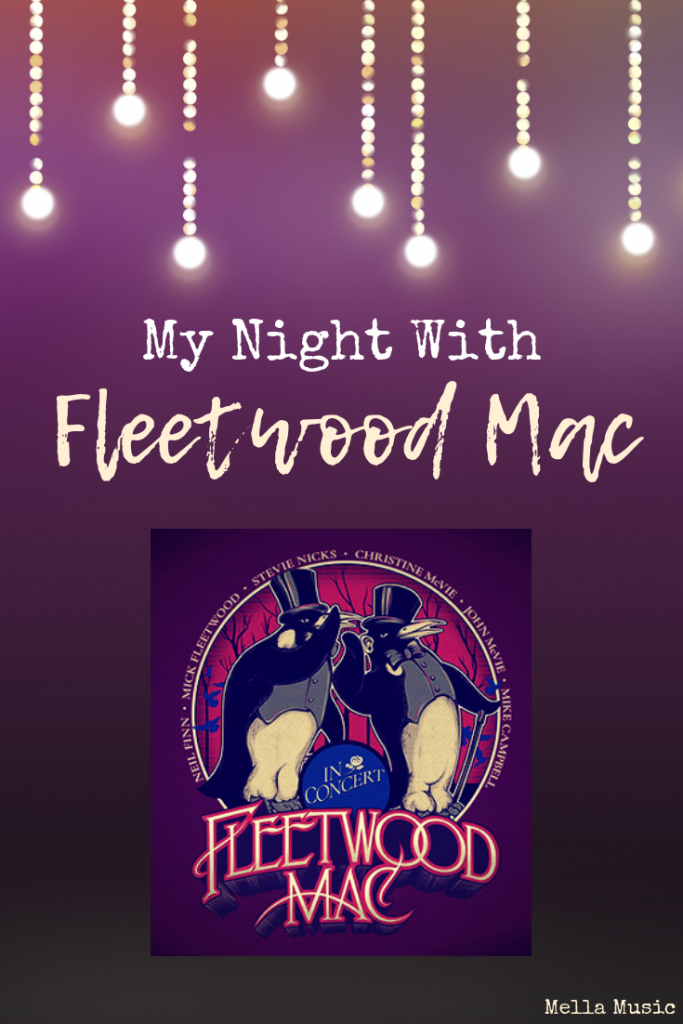 So obviously, Stevie Nicks is my queen. However, Christine McVie is also my queen and two of my favorite Fleetwood Mac songs are hers (“Say You Love Me” and “Over My Head“). One of the first songs they did was “Say You Love Me” and I freaked out. I then discovered that I am a lot younger than most of the audience, and you can tell by our reactions to songs. I’m from the “Scream Your Lungs Out at All Times,” generation, and I think I annoyed my section. Don’t care, I need Fleetwood Mac to know they’re amazing, and my generation does that through screaming.

I fully intended to take detailed notes and write a good review, but I had a massive panic attack before the show and was in bed for three hours. I have Panic Disorder, and I think since I’ve been so hyped for this show and it was FINALLY here, I just collapsed under the excitement. Not a proud moment, but I made it.

I wanted to wear my black lace gloves that look just like Stevie’s, but I didn’t have enough time to find them. 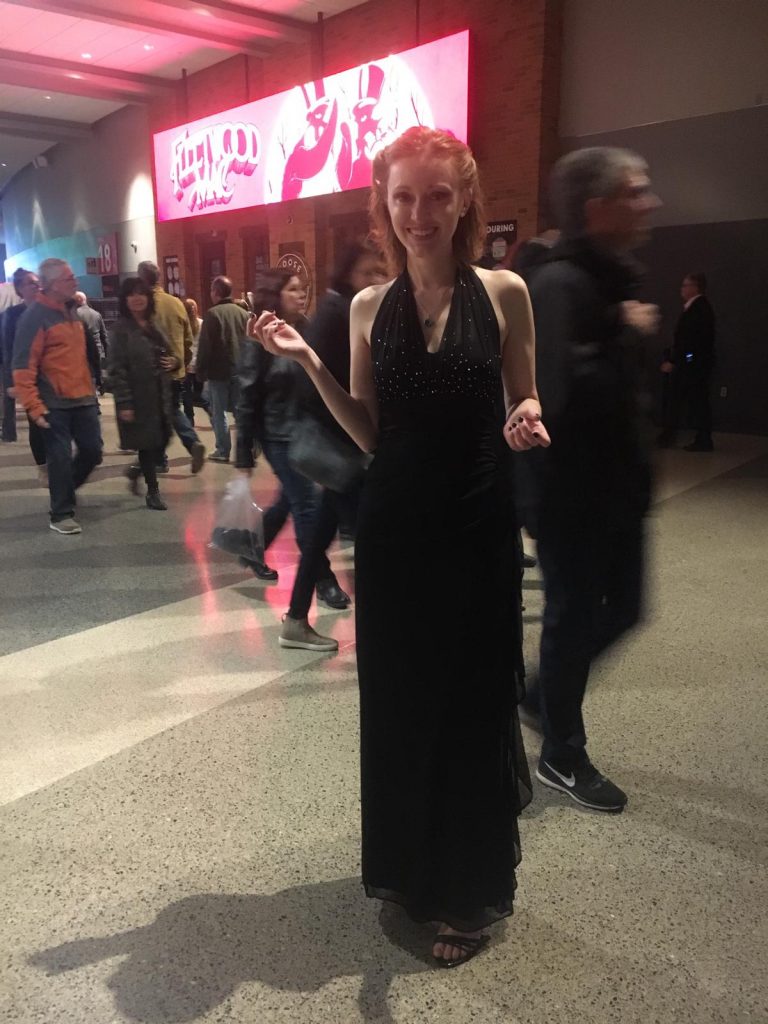 I did my hair and makeup in bed, so I’m kind of proud of it despite it being a mess.

Sorry for the picture sizes. If I shrink them, they look blurry. I’m wearing a necklace my friend in New Zealand sent me for my birthday, which came in the mail last night. Perfect timing, so I had to wear it.

Our seats were pretty high up, but again I chose my seats specifically. Also, I’m a session singer, so I’m not making Stevie Nicks money. The view was great though: 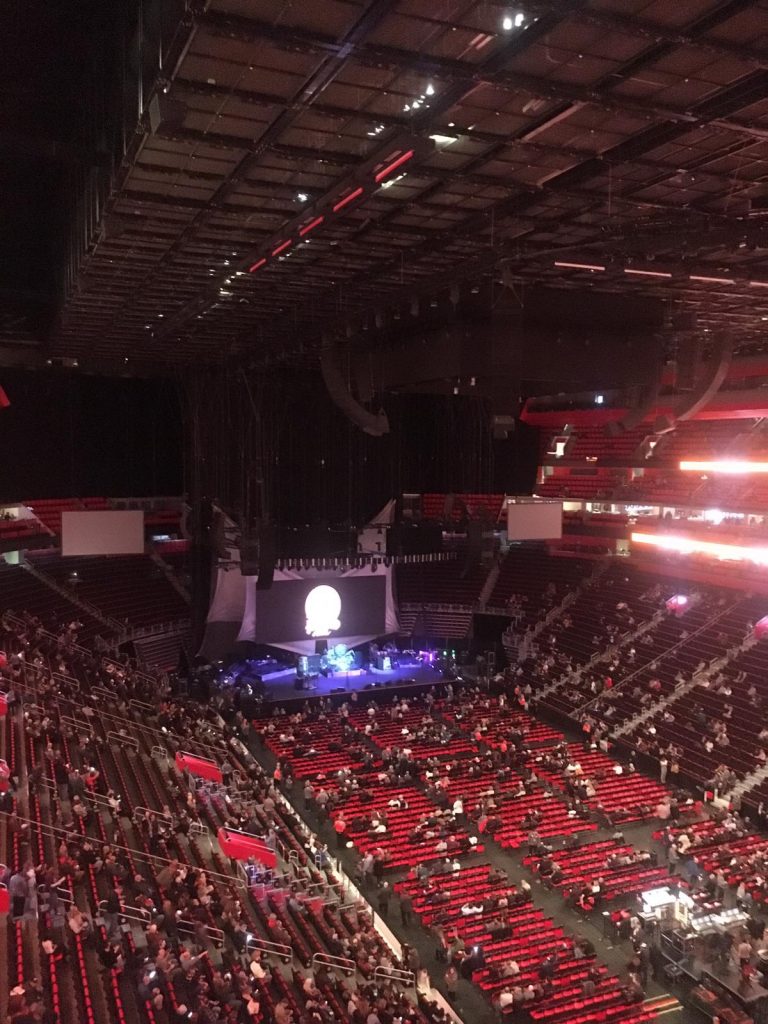 This was at Little Caesar’s Arena, my first time there.

The main floor seats were like $700+, and in my opinion, if you’re not in the very front row and you’re on the main floor, you might as well go up a little. You’re going to have a hard time seeing over people and the sound will be muffled. The front row was sold out immediately and I couldn’t have afforded it anyway. But I was happy with my divinely chosen seats.

So of course there are Stevie and Christine, but they had two female backing singers, of whom I am insanely jealous. They also had another backing guitar player and keyboard player, and I’m sorry I didn’t get anyone’s names. Again, I meant to make this a full review and I’m mad at myself for not writing this down. About half of our section mates were smoking weed and I’m pretty sure I was second-hand feeling it early on.

Mick Fleetwood is amazing. There was an opportunity to meet him before the show, but it was $600 and again, can’t afford. I feel like their prices are based on Baby Boomer salaries and not applicable to their newer millennial fans. Anyway, Mick did a 12-minute drum solo and has more energy than I have ever had in my entire life. He is 72 years old. There was a percussionist who matched his energy and was amazing, but he was easily half Fleetwood’s age.

John McVie was on bass and did not say a word for the entire show. He was the quintessential bass player, hidden in the back but keeping the entire band in the groove. Unsung heroes, the bass players.

Earlier this year, they kicked out Lindsay Buckingham, so I wasn’t sure how it would sound. Mike Campbell of the Heartbreakers was the lead guitar player. He was incredible. His style fit the band perfectly. They did a Tom Petty cover which was really cool. The guitar player and lead singer was Neil Finn of Crowded House. I couldn’t remember where I knew him from, but he sang “Don’t Dream It’s Over” in a duet with Stevie Nicks, and I died. I am writing this from beyond the grave, because this song is already so good and then STEVIE NICKS SANG IT and now I’m dead. The whole audience joined in on the chorus and it was amazing. Lindsey Buckingham has been endlessly salty about being fired, and it sucked to not see him, but they’re kind of doing okay with you, boo.

I watched through breathless tears for most of the show, because I knew this is probably the closest I’ll ever get to Stevie Nicks and far closer than I ever deserve to be. I didn’t write down the set list, but MLive has a great review of the show here, including all of the songs.

Everyone sounded incredible. Christine McVie’s voice sounded weak and small in some songs, like the band overpowered her. I don’t think it was her fault; the vocals were mixed very low and I wonder if there was a monitoring issue also. I could barely hear Mick Fleetwood when he was speaking, which was disappointing. He was asking the audience to do certain things, and we didn’t do them because we couldn’t hear what he was saying. Also, in regards to McVie, she’s fricking 75 so I’m not in any way trying to trash her. She’s a songwriting goddess and was Perfect in every way (inside joke for my Fleetwood Mac stans).

If you look at my main photo, the lights in it were kind of similar to the lights they had on stage. They kept coming down and changing colors to fit the songs’ mood, which was really cool. The audiovisuals were incredible, and I could tell the camera angles were rehearsed down to a T. There were also mini movies for a lot of the songs. A lot of them were simple, but had a big impact. “Rhiannon” was a video of horses running through the water. It was on a loop but it really made an impact with the music. Here is the visual for “Gypsy:” 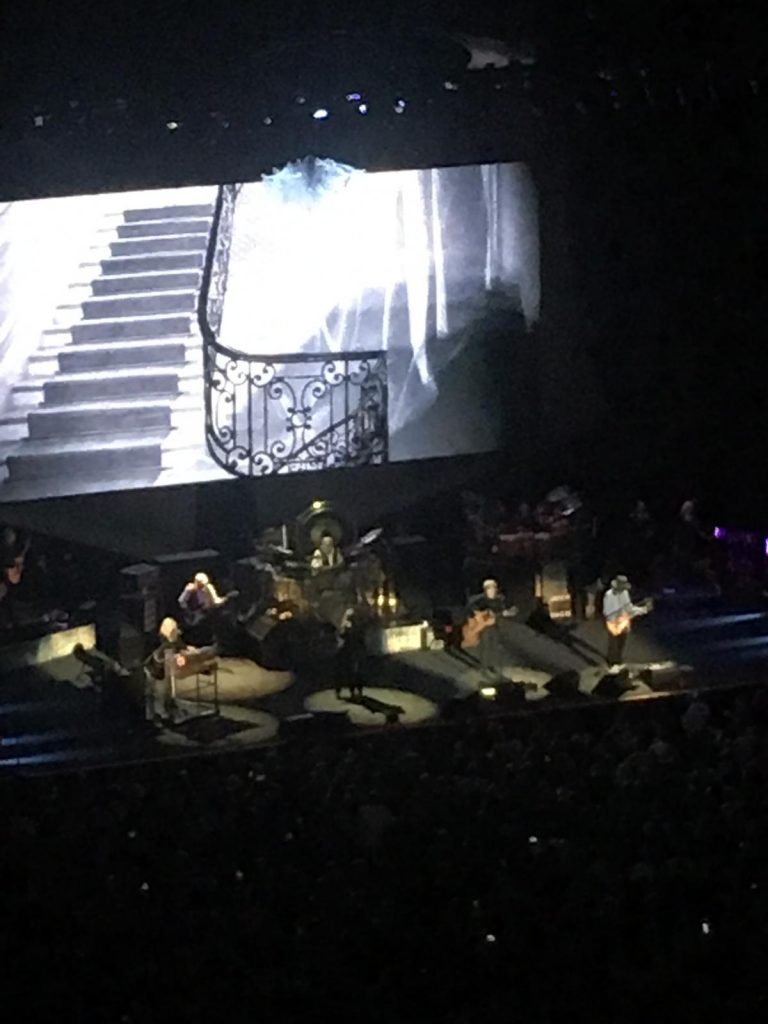 It was a simple video, but impactful still. On her witchy songs, she had a lot of symbolism like crows, glitter and women dancing, which was amazing and I was here for all of it. Love it, love her, love Fleetwood Mac.

The show was almost TOO long, which is crazy to say but honestly, my ass was asleep by the end of it. They did three encores, and it was all incredible, but I was so thirsty and exhausted at the end. I have no idea how they keep their energy up like that, night after night for an entire tour. I definitely got my money’s worth and if you were debating seeing them live, DO IT. You’ll love it. You won’t have the magical numbers like I did, but it will be great nonetheless.

Here’s the final photo, in which I walk several blocks to find an Uber who didn’t cancel, and stumbled into a crowded bar to beg for a glass of ice water: 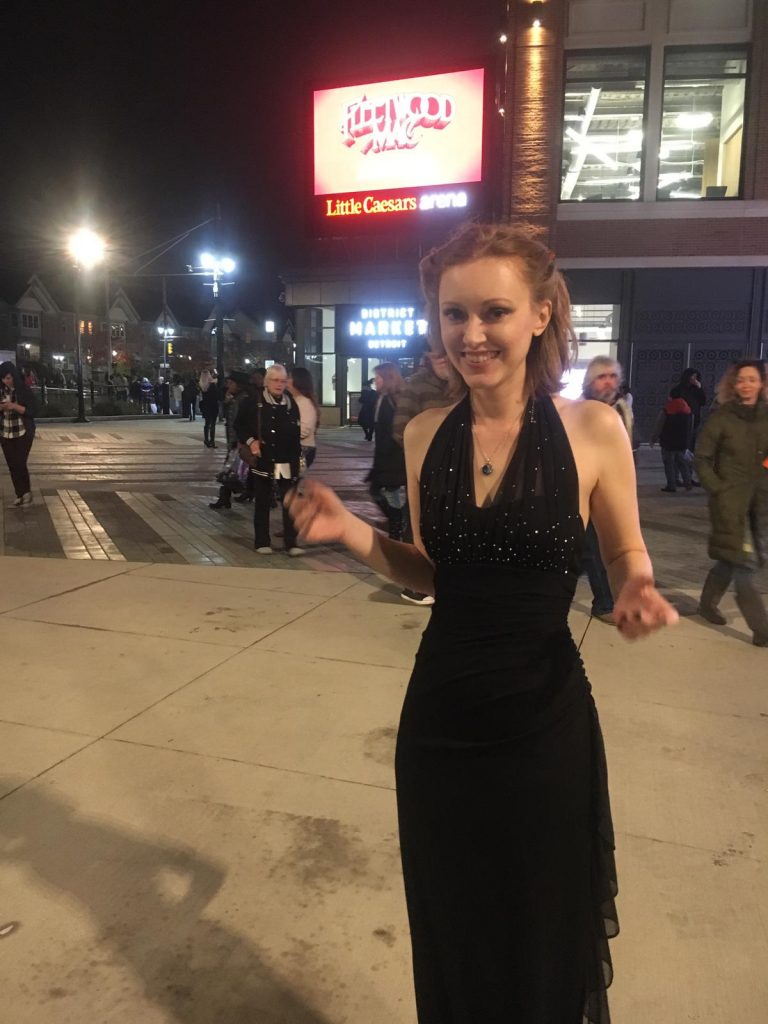 OVERALL I JUST REALLY LOVE FLEETWOOD MAC AND I WAS SO CLOSE TO GREATNESS LAST NIGHT AND EVERYTHING IS PERFECT.

My Best Days as a Session Singer