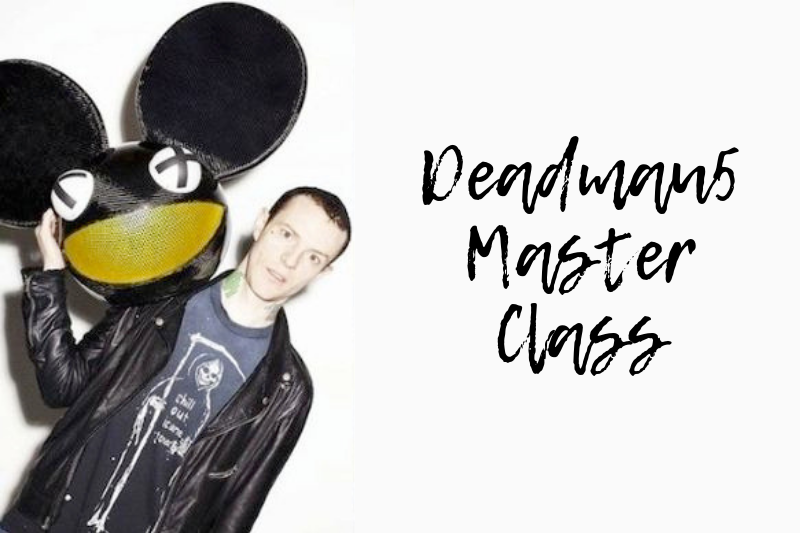 This is my final review of the Deadmau5 MasterClass! I’ve gone through each segment in previous posts. I was going to do this one and make one final recap, but I decided to just end it with this one in the interest of saving everyone time. I’ve liked the class so far so I don’t think this one class will throw my opinion too far the other way.

If you want to see my other posts, here they are:

So here we are, closing out the show! Next week I’ll post my remix of Snowcone, so check here for that!

Just so you know, MasterClass is an affiliate. This means if you decide to take a class through me, I’ll earn a McDonald’s ice tea (large, duh) and you’ll learn to make EDM music! My affiliate links are at the end of this post.

Performing live is NOT something I do. I am a booth-fiend, and although I do perform live occasionally (like the International Pop Fest which you can see here). It’s months of stress and anxiety and honestly, who has time for that? Let people who enjoy performing perform, and let me crawl into my dark booth and live a life of hermit bliss.

Anyway, today we are talking about performing EDM live, and that will wrap up the course. I’m going to watch it and finish it just to give you the perspective.

If you’re taking the class, tweet me and let me know!

Deadmau5 says he makes his live songs sound differently from the album songs (I’ve been to 0 EDM concerts so I wouldn’t know). He says that there are certain album elements that he can’t replicate live, so he has to make up for it in other ways. He says at concert level volume, you can’t really tell.

A great deal of EDM sounds are not live (he says the ratio of live to pre-recorded is 1:1). I’d be interested to know this ratio with other genres, honestly. We all know plenty of pop artists who don’t sing live, but I don’t know how much the whole band actually performs.

He talks about removing certain elements from the recording that he intends to use live. For example, you could remove the bass on your DAW and then play that live. He also says that when he’s writing music, he keeps in mind how he’ll perform it live. I would say a great deal of artists who play live do this too, no?

A playlist should create a flow of a concert. When I play live, I organize my set list by how nervous and tired my voice would be, haha. Overall, you want to create a movement throughout the entire set. The most important parts of a set are the opening and closing, because the opening is the mood you’ll give the show and the closing is how people will remember it.

Obviously, you’ll want to rehearse any show if you want it to be good. Deadmau5 takes this to the extreme and rents out a warehouse where he re-creates the entire stage and plans for every detail. This is probably not in most of our budgets, so I would just say to rehearse for how you imagine the stage will be.

I know nothing about gear and honestly I don’t really care. Whatever you want to use to make things sound good, go for it. Deadmau5 gets technical and mentions names of what he uses, but I forgot them as soon as he said them. The TL;DR is that you really need to know and understand whatever gear you have.

“I’m not feeding off the crowd’s energy. I could give a fuck less if you were there or you weren’t.”

Dude. I don’t know if I’m insulted or impressed. Obviously, as an indie musician who doesn’t have thousands of people trying to buy tickets, we all need to have a different attitude.

ANOTHER QUOTE OH MY GOD:

I would seriously pay the same MasterClass price to just have someone give Deadmau5 a list of popular artists and have him roast them for 10 hours. The KISS quote is about how great they are at performing, and how they switch things up on stage. Apparently Deadmau5 played “Old MacDonald” during a live show (“just to be a dick,” he says) and it was major news everywhere.

Being Comfortable On Stage

With a smirk, Deadmau5 says that if you have stage fright, he’s heard that wearing a giant headpiece costume can help. I think for EDM people that’s fine, but if you sing you’re obviously going to need something else. I don’t think I’ll ever be comfortable on stage, but if you have any tips that help you, please share!

Here is my final video of the class!

Thank you for coming along on this journey with me! My next project will be announced shortly, but for now, here are my affiliate links!

Here is the link for the MasterClass home page, so if you want to sign up for any class at all, you can still do it through me!

MasterClass makes a great gift. If you have someone who would like to take a class, you can buy it for them here!

The Coda: A Breakdown of a (Sometimes Tricky) Musical Symbol

Spotify: Is it Worth the Time and Effort for Musicians?