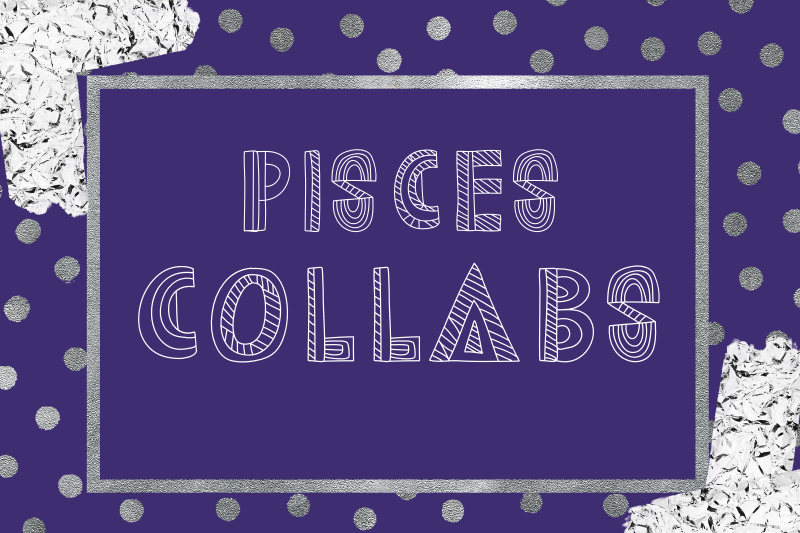 Pisces musicians have birthdays from February 19th through March 20th. It is a water sign, known as “The Fish.” Pisces are said to be intuitive, dreamy and etherial. Haters might call you sensitive or weird, but lovers will call you caring and creative.

Since we are in Pisces, I put together a list of artists who share the same birthday and should collaborate.

Pisces Musicians with the Same Birthday

Let me know if you have an ideal Pisces duet:

Let’s get into it!

I’m so excited to start with this one. Maria Mena is one of my favorite artists of all time. If you haven’t heard of her, I reviewed her latest album here. She shares her February 19th with Henry Olusegun Adeola Samuel, aka Seal. Imagine if he used his full name as his stage name, haha.

I found it very hard to choose one Maria Mena song to show you, but I think this one sums up her vibe pretty well:

She’s got a folksy, Joni Mitchell vibe with modern electronic production. Seal leans more into the R&B category, but they’re both incredible singers.

People born this day are independent and inspirational. I feel like they could write their own parts individually, then bring them together for an amazing duet.

Rihanna is an icon in music and also makes Fenty Beauty, along with multiple other successful endeavors. I think this is probably her most well-known video:

People born this day are intelligent and intuitive, and also both of these artists are icons so why haven’t they already collaborated yet??

Gemeliers is a Spanish twin duo with four number-one albums in Spain:

People born this day are said to be creative and strong, and we’ve got four of them right here! There is no way this shouldn’t happen.

This is definitely a millennial throwback, but it could work. Charles Scruggs Jr, aka Wish Bone of Bone Thugs N’ Harmony, shares his February 21st birthday with Charlotte Church.

Charlotte Church exploded onto the music scene in the late ’90s with her operatic, classical voice. Then there was some drama over the health of her voice and whether or not she should be singing that much and that intense at such a young age. However, she’s still making music as recently as 2019:

People born this day are honest and determined, but honestly none of that matters. What matters is that we get a Charlotte Church x Bone Thugs collab immediately.

Both born February 26th, I think these two would make great music together. Corinne Bailey Rae is a British singer/songwriter who writes soulful music combined with a folksy, indie feel:

Erykah Badu is also a singer/songwriter. Wikipedia lists both artists under “Neo Soul” and I think they do have a similar vibe, but different enough that they could work together well:

I looked them up to see if they had already collaborated, since it would make so much sense. I found out that they haven’t, but they do know and like each other. People born this day are insightful and wise, which describes both of their music perfectly.

Patrick Monahan, the lead singer of Train, shares his February 28th birthday with Jason Aldean. I tried to look them up to see if they’ve worked together, but all I found was a Jason Aldean song called “Night Train.” I’m assuming they haven’t worked together before. Jason Aldean is a country artist:

Train is a pop group (I guess?) with purposely nonsensical lyrics and a desperate attempt to be witty/funny but it never lands, and the vocals sound like mosquitos when they get too close to your eardrum:

Honestly, I’m not a fan. “Hey Soul Sister” is an absolute abomination and I refuse to host it on my blog, so we’re stuck with this mediocrity. “Just a shy guy looking for a two-ply Hefty bag to hold my love.” See what I mean about lyrics that try really hard to be quirky but are instead annoying? Anyway, people born this day are charming and curious, so I don’t know, maybe this would be an okay collab. I don’t have an opinion on Jason Aldean so why not.

How have these two not collaborated already? Both of these pop stars share a March 1st birthday. We all know who Justin Bieber is:

I guess Justin Bieber and Kesha presented an award at the Grammys together in 2010. Kesha was a whole foot and a half taller than Bieber, but I don’t know if that’s still true today. Anyway Kesha is a pop singer/songwriter whom I saw with Macklemore a few years ago (you can read about that here):

People born this day are said to be imaginative and supportive. I wonder if maybe they have conflicting management companies (or maybe they hated each other at the Grammys). There really is no reason they shouldn’t have worked together otherwise, right?

Chris Martin of Coldplay shares his March 2nd birthday with Jon Bon Jovi. Coldplay is a band I’m sure we all know, at least a little bit:

Jon Bon Jovi usually just goes as “Bon Jovi” and this is probably his biggest song, although he has had many hits::

And guess what? Someone already made a mashup of them!

It’s not bad, right? I think this should happen for real! People born this day are loyal and passionate. Let’s make this collab happen!

Both born March 2nd, these two could work together well I think! James Arthur is a singer/songwriter from The X Factor:

Luke Combs is a country singer:

People born this day are trusting and personable. While Combs has a very heavy country accent, I think the two could make something cool and singer/songwriter-y together.

This would be AMAZING omg. I dearly love and miss Stacie Orrico, a pop star from the 90s. She shares her March 3rd birthday with current pop star Camilla Cabello. Here was Orrico’s last hit before Virgin Records merged with Capitol Records and dropped her:

Since this album, she’s released a few small things here and there but no major albums or singles. Camila Caballo was formerly in Fifth Harmony but left to begin a wildly successful solo career:

People born this day are said to be generous and humble. I think Camila is just what Stacie needs to bring her back on top!

Min Yoongi of BTS shares his March 9th birthday with Shannon Leto, Jared Leto’s brother and the drummer/songwriter for 30 Seconds to Mars. Of course, we’ve all heard of BTS:

30 Seconds to Mars is an American rock band that features actor Jared Leto and his brother, Shannon:

People born today are innovative and bold. This might be a crowded stage, but I think they could all pull it off!

I adore Emile Sande and wish she was more well-known. A collab with Timbaland could definitely make that happen! Born March 10th, Emile Sande’s biggest hit is the incredible “Next to Me:”

Timbaland is a singer/songwriter/producer, best known for collabing with other artists which is perfect. Here is one of his major hits with Nelly Furtado:

People born this day are driven, kind and perceptive. I feel like Timbaland could make something incredible with/for Emile Sande and I really hope this happens!

We got another set of twins here. Benji and Joel Madden are identical twins in Good Charlotte, sharing a March 11th birthday with singer/songwriter Lisa Loeb. Good Charlotte is a punk rock band:

Lisa Loeb is a singer/songwriter known for her trademark glasses:

People born this day are lively and unconventional. I honestly don’t know if this would be a good collab, but we’ve got a set of twins so this makes this collab even more necessary.

We all know James Taylor, a singer/songwriter who appeared on The Simpsons:

People born this day are unique and motivated. I think this would be weird as hell, but I’m here for it and totally support it happening.

Disturbed is a rock band, but they did an awesome cover of Simon and Garfunkel’s “The Sound of Silence:”

People born this day are said to be unconventional and intelligent. I think Disturbed’s cover shows us that they can easily switch genres if needed, but Common could just as easily write to one of their songs so I think this would be great!

Again, I’m surprised this hasn’t happened. Both of these rappers have collabed with pretty much everyone except each other. They also share a March 15th birthday, along with a ton of other musicians we’ll see in a minute. Lil’ Dicky has had several massive hits, with my favorite being this one featuring Brendan Urie of Panic! at the Disco:

Will.I.Am started in the Black Eyed Peas, but has since gone on to do incredible music on his own and with others:

People born this day are successful and determined. These two clearly display that, and I hope they display it together soon!

Brett Michaels of Poison shares a March 15th birthday with Mark McGrath of Sugar Ray. Really, March 15th had so many artists it was hard for me to choose who to match up. Check it out, it’s wild. Poison is a rock group that was huge in the 80s:

Sugar Ray is a rock band also, but with a much different vibe and feel:

While they have not collabed, Sugar Ray did cover Poison:

They’re already familiar with each other so this is a slam dunk, IMO. People born this day are said to be enthusiastic and honorable, so those are great qualities for business partnerships.

Formerly of Public Enemy, Flavor Flav is best known for his show, “Flavor of Love.” He also makes music:

I mean I dunno, this could be an interesting duo? People born this day are cooperative and friendly. Flavor Flav is super unique and Jhene Aiko is super talented, so why not?

Grimes is Elon Musk’s wife, mother of a child whose actual name is “X Æ A-Xii,” and also a singer/songwriter:

People born this day are ethereal and hardworking, which definitely makes sense for all 3 birthday peeps here. I think Grimes can lend her unique brand to any band and I think it would work well!

I love both of these artists. They share a March 17th birthday along with the above artists, and I think their voices would be incredible together. Hozier is a singer/songwriter with a little bit of folk and a little bit of gritty soul:

Tamar Braxton is the legendary Toni Braxton’s sister, but she is an incredible singer in her own right. She has a similar vocal style to her sister and makes great songs as well:

They would sound amazing together, don’t you think? People born this day are known to be charismatic and adaptable, which would be great qualities for a collaboration!

What do you think of these collab ideas for Pisces musicians? Let me know in the comments!

Learn Drums Online for Free: An Interview with Gideon Waxman