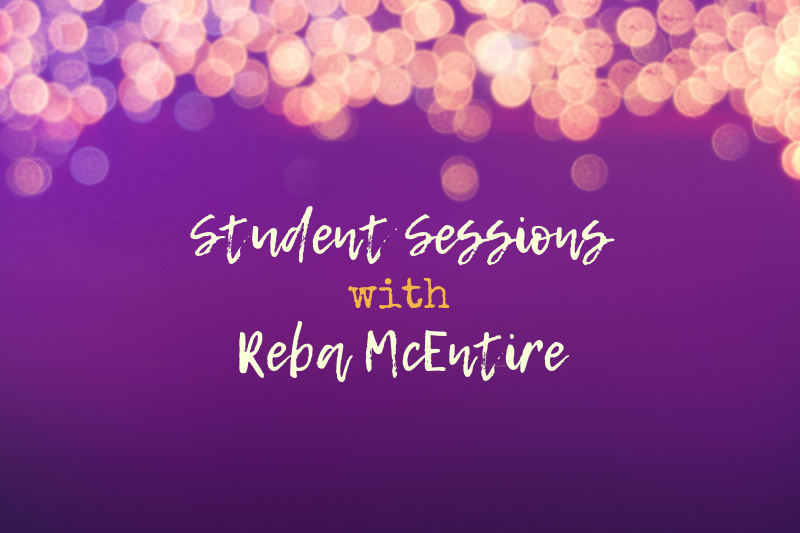 So this is week six of my full review of the Reba McEntire MasterClass. Here are all of the parts of this project in order:

This is week 6, where she did live lessons with four students.

Christina Aguilera did this in her MasterClass also, and to be honest it was probably my least favorite part of the whole course. It’s hard to relate to people’s very specific, individual problems, you know? Still, I decided to watch these because I want to give you the full class experience. I’m really glad I did! I got a lot out of these lessons and I found a new artist I love. 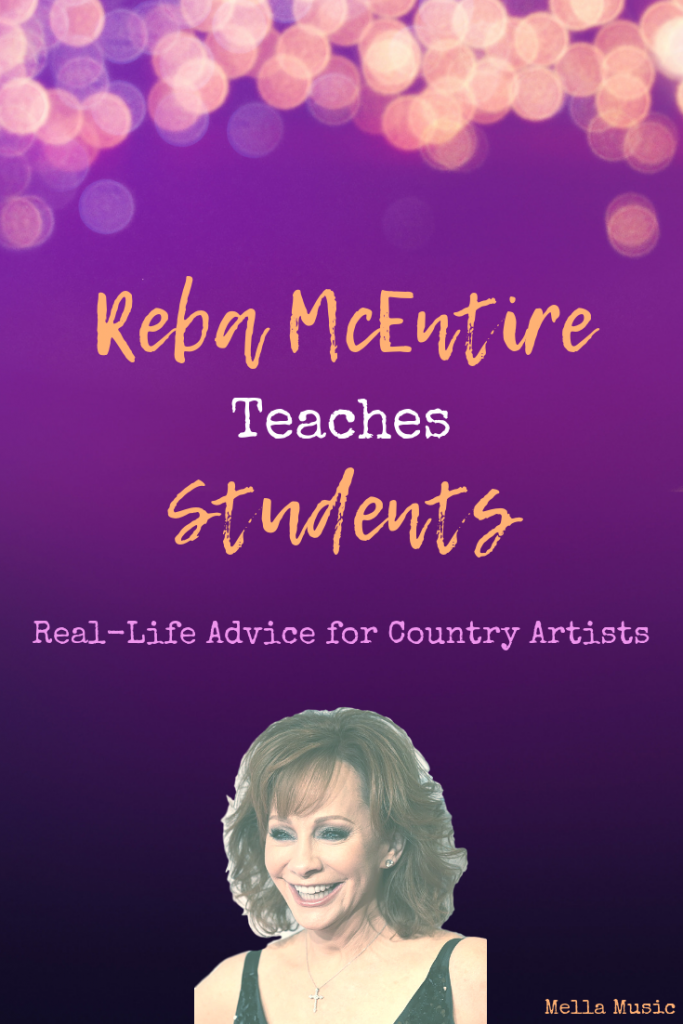 Each student met privately with Reba on the stage of the Grand Ole Opry to have her critique their performance. This is a critique from me about each student.

Trevor is a young guy, probably between 18-38 (because I’m terrible at guessing ages) but right away he kind of old-shames Reba? They have an awkward interaction talking about the Grand Ole Opry, and she mentions that she sat “waaaaay in the back” her first time there. Trevor kind of smirks and says, “yeah, forever ago.” Like…? TREVOR, bruh, what are you doing?? You might as well have asked if she rode in a covered wagon to get there.

I am terribly shy and socially awkward, so I can’t blame Trevor too much. It’s likely I would say something like this too and not mean to, and spend the rest of my life thinking about it. Reba didn’t seem affected by it, so whatever I guess.

Anyway, Trevor plays a song he wrote and Reba gives feedback. Her first compliment is “you have really pretty eyes and a great smile,” which…doesn’t bode well for the song. She says that he needs to make eye contact with her, and also that he’s pitchy. I’m confused as to whether he’s a songwriter only or also a singer? Which again, doesn’t bode well for the song. She has him sing it again, and…sorry Trev, but it’s really pitchy. I know he’s nervous, he may not be a singer, etc, but “eye contact” was the biggest takeaway here.

Next is Cheyenne, and already she’s a lot friendlier. She doesn’t old-shame Reba, and their conversations seems a lot more natural. She sings a song she wrote. Her voice is gorgeous but she doesn’t make eye contact, so I already know what the feedback will be. Also, she’s beautiful and her voice is great, but she would probably benefit from singing other people’s songs.

Damn, I’m getting all Simon Cowell with these people. In person I’d be more Paula Abdul for sure, but you’re here for my honesty so I’m giving it to you.

She also says she’s written “A TON of great songs,” which…pretty cocky, especially since that song was not mind-blowing, but okay. Reba has her sing the song again and when she has her look at the camera, it’s completely different. She really is pretty. She sings the song three times and none of it was catchy to me, but she’s pretty so….just sing other people’s songs, Cheyenne! You got this.

Toward the end, she sort of tries to be humble and fails. “I struggle with self confidence,” she says confidently, “like, I can write and I can sing, but performing is different.” My advice to Cheyenne: Don’t sing your own songs and have a PR person manage your career. You can make it for sure but humility goes a long way, especially in country music.

Emily greets Reba with a squeal. She looks sort of like Cheyenne in the cookie-cutter country girl style: blonde, knee-high boots, lots of jewelry.

I like her song and voice WAY better though. This is my favorite by far. It’s kind of bluegrass, but shows off her range and has a lot of personality. I’m a fan of Emily. This is a kind of song where I’d be in a noisy Nashville bar and I’d stop what I’m doing and pay attention.

Reba asks her what genre she would call the song, which is a good question because although it’s a great song, it’s tough to know what artist would sing it. Emily calls herself, “Groovy Americana with a deep, deep love for twang.” I AM A FAN. Emily you’re amazing. Reba says she likes that she’s so different, and I agree.

My one critique for Emily: Dress more “groovy Americana.” You’re wearing the exact same outfit that Cheyenne wore, and you could add a lot more flair and make yourself more unique. But that’s it, really, you’re awesome. And I have no idea how you normally dress so you might already do this.

Reba has her sing it once more standing up, which was not even a critique, I think she just wanted to hear it again. I’m okay with that because I love it.

After the class, I searched for Emily and found her here, and I was even a creeper and slid into her DMs. I told her how amazing I think she is and I hope she goes far.

I HAVE AN UPDATE ABOUT EMILY PLEASE SEE BELOW.

I’m glad we have some diversity in this group, as Nashville songwriting circles are usually incredibly white. Jimmy is black and wearing a camouflage baseball cap on backwards. He seems nervous like they all did, but he gets right down to business which I like. Reba keeps trying to ask him questions and he keeps trying to start to play.

He’s very humble, saying that he writes “eight terrible songs and then one kind of good one.” Even if it’s not true, I like that attitude. It’s funny and relatable.

His song reminds me of a Sam Hunt style. He has a great voice and the lyrics are great, but the melody is kind of forgettable. He would do well co-writing, especially if he was being honest with his previous statement. There’s a lyric about kissing a girl “everywhere we ever been, everywhere we never been, I wanna kiss you everywhere.” It’s a great line.

Reba’s standard question to everyone is about the meaning of the lyrics. This is the first song that hasn’t been a true story, which I think is actually even more impressive. She has him sing it again with more emotion, and this time the melody comes through a lot better. She gives him advice on how to breathe better, which is a technique I’ve never tried and great performance advice.

Jimmy is friendly and funny and he and Reba have a good rapport. They could have their own show together (or she could have him on her show I guess).

Overall, I have to say that I liked these student sessions more than the Christina Aguilera ones. I don’t really know why, I think maybe because I either knew what to expect this time and it wasn’t out in left field, or these were maybe more applicable to me. I recommend watching them because Reba gives great tips (the breathing exercise she gave Jimmy was amazing) and every performance improved after following her advice.

Here is the song she sang, I just wish the sound was full because holy crap, I love this song. I connected with Emily on social media and she’s incredibly nice and she has a new single on Spotify called “I Baked You a Pie.” Check it out here:

This is so cool, I went into these student sessions expecting to be bored at best, but I did learn a lot and now I have a new artist to love. I hope you enjoy Emily’s song, but to hear “Wild Boy” you’ll have to take Reba’s MasterClass!

Time for my affiliate plugs!

How to Get the Best Harmonies From Your Session Singer

Music Clients I’ve Fired (and Why I Fired Them)