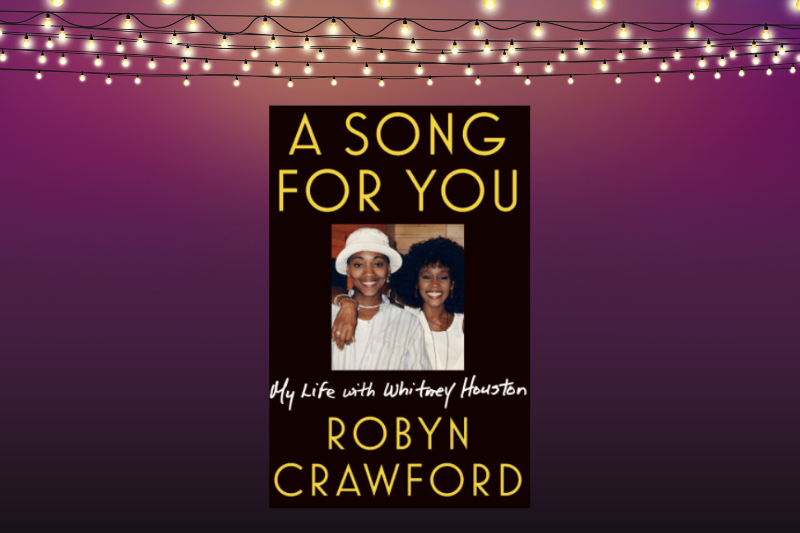 We’ve had pretty much every other family member or friend write a book or op-ed about her. We have multiple documentaries. Aside from her article in Esquire, Robyn Crawford has remained pretty silent. We now have her side of the story.

The Story by Robyn Crawford

Anyone who’s followed my blog here will know I’m a huge, huge Whitney fan. I’ve got the proof:

So, this book was a long time coming. I preordered it, salivated over it and read the whole thing in a day. Let’s cover it.

I’m sure this is the main thing everyone cared about, so let’s discuss. Yes, they were lovers. I think we all kind of knew that, no? Robyn discusses it in a respectful way, making sure not to hide any of their flaws or negative traits, but doesn’t linger on them either. It basically confirms what we all assumed but fills in delicate details.

Whit (as Robyn calls her) seemed to go after men who treat her like crap. This is not unlike many people I know, but it’s interesting that someone of Whitney’s caliber would seek the same.

She chased Eddie Murphy to a cringe-worthy level. I was yelling “GIRL STOP” at my computer.

Apparently, she also had an affair with Jermaine Jackson. He was producing her and they had a fling. I guess there were rumors about this (I don’t think I was born yet? I don’t remember this) but Robyn confirms that it was true.

It seems she had way better taste in women than men.

Hoo boy. Okay. So we all know Bobby Brown had his issues and demons. However, Robyn’s account makes it seem so much worse, on both ends.

Brown got into a physical fist fight with his baby mama IN FRONT OF Whitney and Robyn, BEFORE they started dating. The woman turned to Whitney and told her this would happen to her too. Whitney still went after him.

As if that wasn’t bad enough, he went to said baby mama’s house to break things off with her and tell her he was with Whitney, and then whoops – she ended up pregnant again. WHAT.

She still pursued him. I mean…this just kind of fills in those gaps of “why would Whitney ever be with someone like that?” She seemed to have a dire need to chase after people who treated her like shit. These are the absolute reddest of flags and yet she ran after them at full speed.

It’s been pretty obvious that the Houston family did not and does not like Robyn. In the documentary, they had nothing good to say about her. They repeatedly spoke negatively about her throughout Whitney’s life, and long after her death. I wondered if Robyn would trash them as much as they had her.

In my opinion, she remained classy yet truthful. She didn’t shy away from things she didn’t like, but she gave evidence as to why. Many of the family’s issues with her were things like, “I just didn’t like her,” or “she was bad for Whitney.” Robyn is careful to give compliments where they are due, but criticisms are absolutely due also.

As careful as Robyn was to speak fairly, the facts speak for themselves.

Whitney’s mother was a famous session singer, blah blah blah. She was also obsessed with the spotlight and forced her daughter and sons into situations they shouldn’t have been in for personal gain.

She also played a major role in steering Whitney away from a relationship with Robyn, but apparently thought nothing of the awful relationships she had with men.

Her older brother Gary was a drug addict, didn’t show up for rehearsals (he was her backup singer), and still was made to perform. Cissy apparently felt Whitney should have to do all things, from every household chore to covering for her brother’s irresponsibility.

In my post about how Whitney inspired me to be a session singer, I talked about how her earliest work was session singing. Robyn Crawford talks about this in detail, much more than other books I’ve read.

She worked with someone named Kashif on a great number of songs and started to experience what all freelancers know as “scope creep.” The client repeatedly asks for more than what is originally agreed upon. He asked for more takes, more songs, more work, for no pay. She never got paid for any of it, and asked him to take her vocals off of the songs. He agreed to do it, but released them anyway. She remains on the work but unnamed.

This is unfortunately pretty common in this industry. I just wanted to mention it because it happened even to Whitney. I will not include those songs in my post ranking all of her songs, because she didn’t want to be on those and I don’t think that’s fair.

While this version of events will obviously be slanted, I felt Robyn’s was far more respectful of the Houston family than they’ve ever been to her. Her words ring true and nothing she says seems far-fetched or unbelievable.

Personally, I’ve always been a fan of Robyn, I thought she was a good influence for Whitney and one of the few people who cared about her best interest. Obviously I’m biased here as well, so take that for what it is.

We also get a great deal of Robyn’s backstory, which is not something we’ve ever been privy to. Her life has been incredibly interesting, at times heartbreaking but always inspiring.

Reading Robyn Crawford’s book was like peeling off a scab.

The wound of Whitney’s death has healed over time. I saw the latest documentary, processed it, and moved on. This book itched the scab right off. Re-opening the pain of early loss and unfair circumstances. The sadness has healed, but not very well. Perhaps the scab will never fully scar, and any new book will easily re-open it.

However, the one piece we have missed, the one side of the story untold, has now been revealed. Laid out carefully, respectfully and beautifully, the story by Robyn Crawford is the story we’ve been waiting for. I highly recommend it.

What’s your take on the Robyn Crawford story? Let me know if you’ve read it and what you thought!

The Sagittarius Musician: How Your Zodiac Sign Impacts Your Music