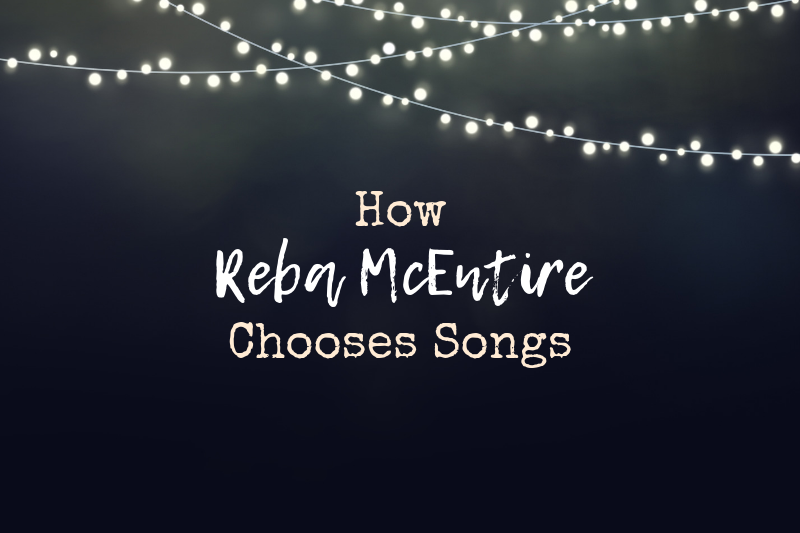 This course was actually called “Choosing A Song,” which is an important distinction. Writing a song and choosing a written song are very different, and Reba explains why the latter is better for your career.

This is the second part of my MasterClass project where I take and review Reba McEntire’s MasterClass. You can see all of the parts to the project here: 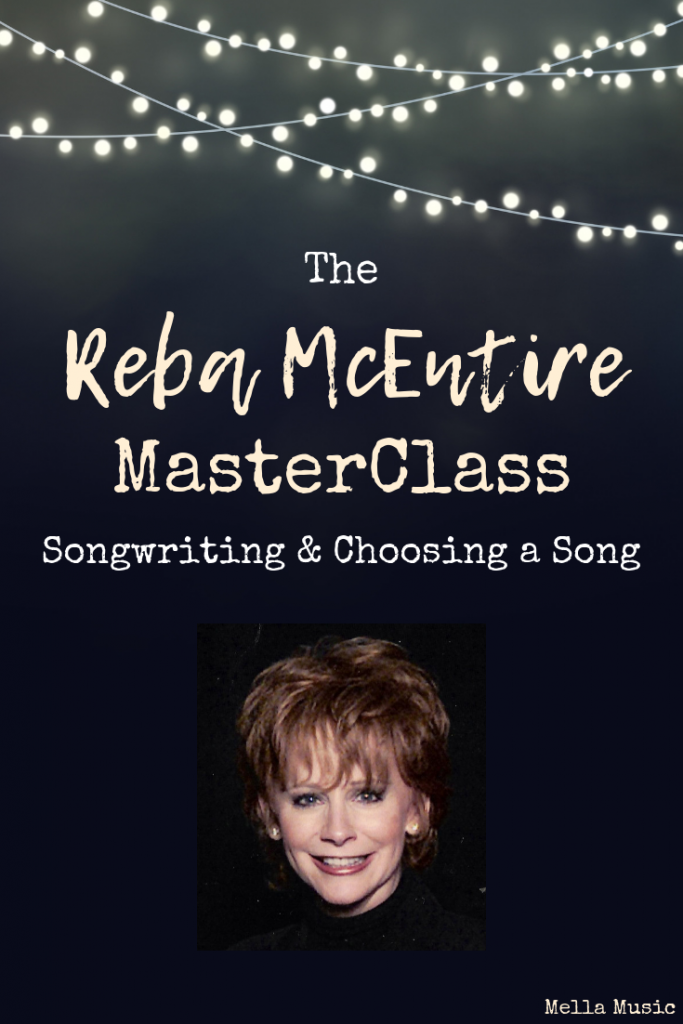 Selecting a Song with Reba McEntire

Reba gets right to the point: Your first single could be your last. This is a reality for MANY singers, as this extensive list of one-hit-wonders tells us.

In 1976, when Reba got started, she says the radio was more patient and it was six years before she got her first #1, “Can’t Even Get The Blues.” Nowadays, you don’t have as much time to build a career. You need the exact right formula for the release – Producer, Musicians, Mixers, etc.

“What if I write my own songs?”

McEntire says that no one can write enough #1 songs by themselves to sustain a career in today’s market. Honestly, guys, she’s not wrong. In my intro post I talked about how many writers are included on hit songs, and the odds that you yourself are going to sit down and churn out chart breakers for your whole career are slim to none.

But don’t despair! You can certainly collaborate with other artists. You’ll just have to allow other people to have space to contribute to your success. In my post about every Whitney Houston song ever, I told a story about how her writers for “How Will I Know” wrote a COMPLETELY different-sounding song to the final. They resisted the change, but it ended up being such a huge hit that they were asked to come back to write “I Wanna Dance with Somebody,” along with several other hits.

I say this because I see WAY too many singer/songwriters who refuse to work or collaborate with others. There are great singers who are not strong songwriters, but they insist on writing or co-writing their songs anyway, and I think this hurts their career. There is no shame in teaming up with someone who can take your talent and maximize it!

Anyway, Reba is honest about the fact that she does not write most of her songs, and I kind of love this. I love that she gives songwriters a space to come forward. She says, “There’s lots of talented songwriters out there, thank God.”

About 8 months prior to recording, she gets the word out that she’s looking for songs. Then, she starts going through them (she says they *HAVE* to be published), and accepts the ones she wants.

“Why do the songs have to be published?”

She says that she has heard of times when people hear a song that isn’t published, then years later write a similar song because it’s in their head. They can get sued over that. So, publish your songs, songwriters!

I think Reba means she gets her songs from publishing houses, which are difficult to get into. Still, you can publish your own songs. Register it with your PRO (BMI, ASCAP, SESAC etc) and you can also copyright it. Here’s a more in-depth look at the process.

What Reba Looks for in Songs

When she listens to songs, she says she can tell after one verse and chorus if it’s a song she’s going to keep. Sometimes it only takes one verse. She takes this process VERY seriously, but if it doesn’t hold her attention she moves on quickly.

I know from personal experience when I pitch songs in Nashville, Reba is often mentioned as the be-all, end-all reference for song pitching. She works well with songwriters and is willing to hear any song at least once.

Obviously, this is easier said than done, but I list them here to help both singers and songwriters.

She advises that you shouldn’t let your mood determine a good song. If the song seems okay but isn’t in the right frame of mind, she’ll save them and listen to them when she’s in the right mindset.

This is a case study song the class goes through. It was really illuminating. I had never heard the song, but I listened to it and I’m not proud to admit that I maybe got teary-eyed over it. I highly recommend listening to it as it encapsulates all of her criteria.

This song was written by Kendal Franceschi and Quentin Powers. The song was inspired by “Weekend in New England” by Barry Manilow, and Sugarland’s song “Stay” was inspired by the perspective of the mistress. It’s really interesting to see how one song can become three just by changing perspectives!

She says she knew it was a hit from the way her arm hairs stood up. An interesting point about this song is that they played the demo and it features a male singer. I need to mention this because nowadays this is NOT the norm. If you want to pitch the song to Reba McEntire, your singer needs to sound like her. You might be okay if you have a good enough song, as is the case here, but this was a long time ago.

Reba also mentions that her fan club had more members in Pennsylvania than in Texas, so that’s an interesting note if you’re a country singer – don’t neglect fans outside of the south! Country fans are everywhere. She says, “The northeastern part of the United States LOVES country music, still does today,” so that’s important. If you think you can only make it in Nashville, explore your area a bit more and you may find that you’re wrong!

She also says that even three years later, if she had heard the same song, she probably wouldn’t have chosen it simply because her stance on cheating had changed. So this is important for songwriters to note: Your chances of getting a song selected have a LOT to do with the singer’s current life stance and frame of mind! This is out of your control, so don’t feel bad if a song gets rejected.

She also advises singers to “trust their gut” when choosing a song. It’s helpful to get a 2nd or 3rd opinion, of course, but you need to love it yourself before recording it.

Here is my video recap of this lesson:

If you’re a songwriter trying to get a song cut, I highly recommend taking this course for this lesson alone. Hearing a country legend describe what she wants is well worth the money spent!

If you want to take Reba’s class through me, I’ll get a small percentage from your sign-up fee. It doesn’t cost you anything extra but it helps me continue to do projects like these. Here are my links if you want to use them!

The holidays are coming, and I’ve given MasterClass as a gift before. It’s a cool idea and if your loved one is a fan of any of the instructors, it’s a unique gift that keeps giving! Give as a Gift: Give the Gift of MasterClass

I use the All Access Pass, which is the cost of two classes but allows you to take unlimited classes throughout the year. Totally worth it if you plan on doing more than one!  MasterClass All-Access Pass

If you end up taking the class, please let me know what you think!

How to Get the Best Harmonies From Your Session Singer