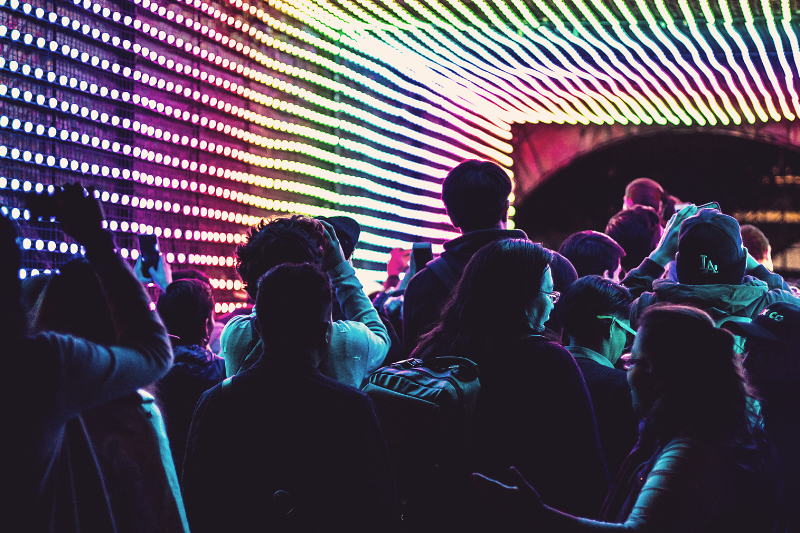 We’re halfway through the class and I’m excited to share this part with you! This week is all about remixing (or “reworking”) songs and a terrifying assignment I have.

Before we get started, I just need to let you know that this is an affiliate post. That means if you take the class through one of my links, I’ll make a small percentage off of your pay. You won’t pay any extra, it will just throw me a couple of dollars. Just so you know!

Before we begin, please let me know if you’re taking the MasterClass too!

We start out by learning how to keep loops interesting. Deadmau5 says you can’t just copy the same loop a thousand times, which is bad news for my first few attempts at this. He says that there is a formula to follow and walks us through how he structures his loops.

After watching him work in Ableton a lot, I can say that I honestly just really prefer Logic. I don’t want to be one of those people who hates everything that’s different from what I’m used to, but Logic is visually much more appealing to me.

We watch him arrange a track and it’s very similar to how I arrange Logic loops, but his are all made himself so that’s the huge difference. It’s just about creating a sequence of loops, and then going back and adding or removing certain elements in parts to keep it interesting.

Most EDM songs should be 6 – 7 minutes long, but Deadmau5 says he’s had songs up to 13 minutes long. However, those songs have changes throughout that keep them interesting and make them feel like several smaller songs instead of one long one.

This is not something I need to worry about at all, because a). I never perform live singing, and b). I definitely never plan on performing my EDM music live. However, I watched it just to give you this info: it’s important to make sure the ends and beginnings of songs line up seamlessly so that there isn’t a weird key change or long awkward silence. He says to think ahead to your song line up and make sure you can blend things in a pleasing way.

This is one of my favorite movies of all time, and I screamed when Deadmau5 mentions it and recommends watching it. We are so alike! We should hang out! Me, Deadmau5, Reba McEntire and Christina Aguilera would make a great morning talk show.

He talks about the similarities of how classical music is structured and how pieces of music were constructed to inform the audience of when to clap. EDM is similar in that the drop informs people of when they should start to dance (or whatever people do when clubbing, I really wouldn’t know because I’m home working in my vocal booth or watching Hulu every weekend).

Deadmau5 prefers the term “reworking” over remixing. He usually just takes one part of the song (usually the vocal) and remakes the whole entire song.

Hey Deadma5 if you want any vocals to remix I have tonnnnns you should contact me or let me contact you k thanks!

I actually do make remixes for artists often, such as Fast Car or Far Away. It’s always interesting to hear how people remix (or rework) things. Deadmau5 says he does reworks on commission, so I really wonder how much that would cost. I’m sure it’s probably more than my whole house and car are worth combined, but maybe he would give me a MasterClass discount, haha. (Just kidding, I believe in paying artists what they’re worth!) I might contact him just to find out. I don’t want to waste his time but if there was even the slightest chance I could afford it, I would definitely try.

He opens a track from Skylar Grey (an amazing songwriter you should check out here). She sent over an already-made vocal and he shows us how he created something new out of it. It really is amazing and I’m so incredibly jealous of Skylar Grey’s talent. Deadmau5 laments that Skylar Grey is impossible to get on the phone so he never actually finished the song. This meant that his remix is now his original song and he just deleted her vocals. He says “Sorry you couldn’t get your shit together, but now I made this and none of this shit you own.” He sounds kinda pissed about it, like…is there Skylar Grey/Deadmau5 beef?! Maybe I should start a drama channel on my YouTube. Anyway, he says this is the reason you should do “reworks” instead of “remixes” because, in his words, “if someone’s being a dick,” you get to keep what you made.

He goes over remixes people have made of his own songs and pulls up his favorites. It’s always been a dream of mine to be on one of those “Artist Reacts to Fan Cover” videos. I guess I should probably start doing covers of artists that are still alive, in that case.

Deadmau5 also goes over remixes he DOESN’T like, which would really suck to be that person. Maybe I don’t want to be in those reaction videos after all.

I Have to Make My Own Deadmau5 Remix

AHHHHHHH NO I am not ready!!! Actually, this might be a great opportunity to topline for him. I’m going to really spend some time on this and make it (hopefully) great. I’ll also make a video of it as a final cap on the class. I need to get started, I’m so nervous!

The song we are remixing is “Snowcone,” which we’ve been reviewing throughout the class. I am freaking out. It’s like learning your final essay is 100% of the grade and you haven’t started writing it yet. These lessons every week are a TON of work and I’m having a good time, but I’m getting overwhelmed.

Here is my video on this week’s lesson:

Next week, I won’t release a blog post but I’ll update with my video progress on the remix.

Update: Here is my video showing my progress on the song:

Here are my affiliate links if you want to take the class through me!

Here is the general link for MasterClass, so if you want to sign up for any class at all, you can still do it through me and I would appreciate it!

MasterClass is a great gift; I’ve given it to several people in my life. If you have someone who would like to take a class, you can buy it for them here!