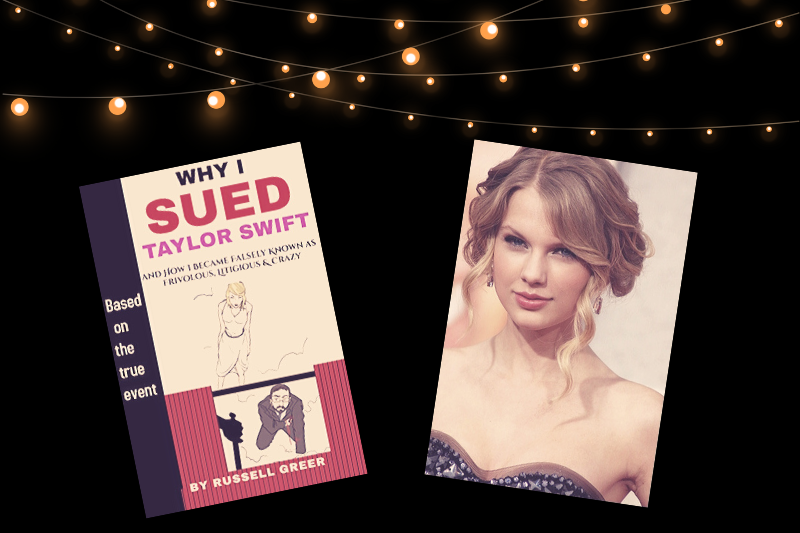 “Why I Sued Taylor Swift” is bad in its own right, but I have several personal bones to pick with it.

If you’re not familiar with Russell Greer, here are a few key points to bring you up to speed. He sued America’s Got Talent for not accepting his audition, claiming it was because of his disability (here is the audition). He has a long history of suing various people, including Farrah Abraham, Heidi Klum, Taylor Swift and more (video here). Here is an entire site of all of his many antics. You have to admit, the dude’s entertaining.

I found his book while researching “Worst books about the music industry.” I bought the physical copy because I knew I’d be taking copious notes.

Why This Dude Sued Taylor Swift

If you’re more of a watcher than a reader, here is my video review:

Long story short, Russell has a disability and believes the world owes him a favor for it. Seriously, he believes it should be a felony for women to turn down a disabled person. This is one of the many reasons he sued Taylor Swift: He believes she owes him because he is disabled.

Important Note: Making fun of people for their disabilities is not cool, and I would never do it or encourage others to do it. This post is in no way meant to demean anyone for disabilities. I’m just salty because my colleagues were demeaned and now I’m clapping back. Please do not attack anyone mentioned in this post, as it’s just for entertainment and not meant to be anything else.

I’m just gonna put this out there though: I have Type 1 Diabetes, which is technically a disability. Anyone who doesn’t hire me is ableist and scum and I will be suing you. I’m also suing The Grammys because I’ve never won any, and that’s not fair because I deserve it for being disabled.

Here’s an article from Medium exploring more of his psyche and why he might behave this way.

The Book in a Nutshell

Aside from the comic sans font, the margins going all the way to both edges of the page and the double-spacing, the book itself is pretty unreadable. He goes into ridiculous tangents in the middle of telling stories. He attempts to tell jokes and then explains the jokes, because he doesn’t think the readers are as smart as he is.

Direct quote: “Realizing that not all of my readers have a legal education like I do, I’ll try to make this section as coherent as possible.”

Bruh. You have a paralegal degree from a religious school and you got fired from your first job (per your own words). Most importantly, you’re writing a book. EVERY section should be as coherent as possible.

Anyway, the book is about how he wrote a song for Taylor Swift, she didn’t accept it and he sued her. He then claimed that by not accepting the song, she disability-shamed him. As I wrote above, he’s sued a great many people for a great number of things. I’m hoping I’m not next.

The Part That Especially Pissed Me Off

I didn’t read much past chapter 2, but I literally threw the book down and screamed after reading that he hired a company I work for to make his Taylor Swift song. I won’t name the company because they’ve since re-named and reformatted their business, but I will tell you this:

They’re a good company. They work with incredible talent and most importantly, session musicians do not write songs. They perform what they are given, and they were given garbage.

He even put the song’s sheet music and lyrics in the book, so we can tell just from looking at it that it was performed the way he gave it to them.

Here’s the part that drives me nuts, and what drove me to even talk about it in the first place:

1). You MUST Give Specific Instructions to Session Musicians

According to the book, the instruction was to “add flavor” to the song.

That means nothing, and it also guarantees you won’t be happy with the result. If “add flavor” means something specific to you, how would we know what that is? We aren’t mind readers. If it’s supposed to sound like a specific Taylor Swift song, that’s something we need to know.

2). If You Give Us a Bad Foundation, Your Product Can’t Be Great

The customer is not always right, and this entire book is proof. The book has the lyrics and sheet music, which is enough to determine that the song was not great when it was submitted.

Session musicians will give your song life. We will polish it, make it feel shiny, new and professional, but if your chords/lyrics/structure are bad, we can’t fix that. That’s where a total re-write would come in, and that’s a different service.

You can always ask for feedback, but it doesn’t seem like that was done in this case. We won’t provide it if it isn’t requested, because it’s not our business.

3). When Giving Feedback, Remain Calm & Be Specific on Edits

He literally called the company immediately and yelled at them. There is no way to get a positive result with that. What he should have done, what I always recommend, is take a day and carefully analyze the song. What, specifically, needs to be changed? I have a whole post on that here. According to the book, he told the company this:

“I told you to add flavor and it sounds like flipping Sesame Street!”

Okay well a). That’s not good or helpful feedback, and b). again, we don’t know what “add flavor” means.

Had he approached them in a calm manner and explained what he wanted more thoroughly, I know for a fact that they would have worked with him to make changes until he was happy.

This is the most important note and could have saved the author from any trouble in the first place. Taylor Swift would not accept a song from an unsolicited source, even as a gift. There are way too many potential legal issues from that. Artists open themselves up to being sued by accepting any type of material like this, whether it’s a “gift” or otherwise.

I could write a separate post about each of these, and I probably will in case it’s helpful to other songwriters. We WANT your song to be a success, so it’s important to understand each other from the beginning!

My Personal Message to the Author:

Look dude, I don’t doubt that you’ve had a tough go in life. It seems that you’re incredibly angry about a great many things. I strongly urge you to seek therapy, as I think that would be your first step in figuring out your life path.

Life is tough for everyone and there’s no doubt you’ve had your own unique struggles. However, no one owes you anything because of that. Having a disability doesn’t entitle you to more and better things than anyone else.

You already have a leg up on many songwriters: You’ve got a ton of press and people often talk about you (hell, I’m doing it now). You’re an interesting person, and you can use your platform for good. Keep working on your craft and making new music. Hire session workers and please, for the love of God, follow the tips I listed above. Release your music and people will see your improvements and you’ll gain new fans. You really have nowhere to go but up, and I wish you all the best.

How I Realized I Wanted to be a Professional Session Singer

How to Maintain Work-Life Balance for Songwriters and Musicians