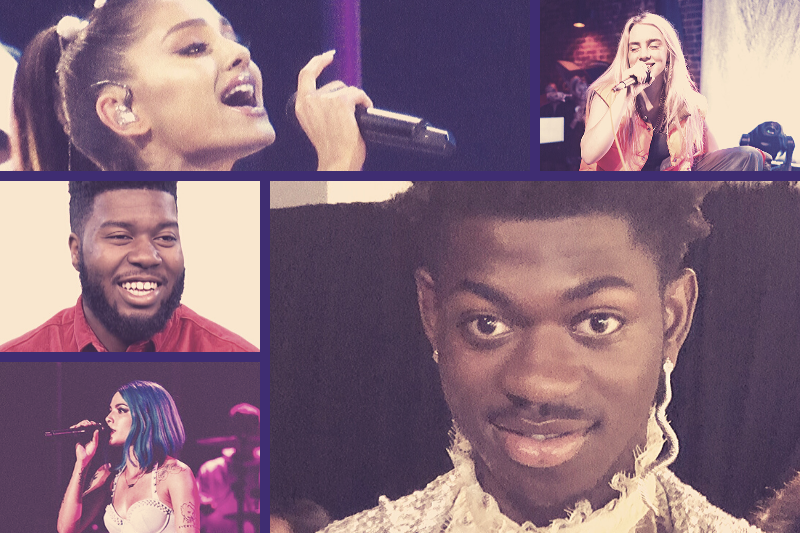 The Top Artists of 2019 – let’s celebrate them, congratulate them, and learn from them! I do this every year (you can see 2017 here and 2018 here if you want). It’s hard to list the “top artists” because that’s a controversial topic, but this list comes from Billboard and we’re going with that. Here it is if you want to fact check me. Not a shocker, some of these were big last year too, so I’ll likely skim over those a bit.

Let’s see how these artists got big and what we can learn from them!

Ashley Frangipane has been steadily climbing to her success since she came out in 2014. Halsey is an anagram of her name (Ashley). Her unique voice is instantly recognizable. She started writing music at age 17, an eventful year for her including a suicide attempt, a relationship with a 24-year-old and a bipolar diagnosis. She toured with The Kooks in 2014 and released her own music, which hit the lower end of the Billboard charts. After performing at South by Southwest in 2015, she was the most tweeted-about performer of the night.

Her first album, Badlands, was released in 2015, after she started a tour opening for Imagine Dragons. Fast forward a steady stream of releases and hits to 2019, when “Without Me” exploded onto the radio and refused to leave. I liked it at first, but I’m honestly so sick of this song:

Additionally, Halsey is a very outspoken and often controversial figure. She openly talks about being bisexual (not that that should be controversial, but hey). She doesn’t shy away from taboo topics and doesn’t mind voicing an opinion.

The Lesson: Build off of growth. I see a lot of musicians have a decent hit and take years to follow it up. Halsey’s massive success this year comes from a string of smaller successes starting in 2014. If you get some traction, keep going!

This dude has had an incredible year. We already know the song that launched Montero Hill to fame:

This song seemed to just emerge as a number one hit and stayed there for 19 weeks (the longest time at number one in history). However, there was a lot of buildup to the song’s success.

Lil Nas X created his name as a tribute to rapper Nas. He had a large Twitter following prior to creating the song. He mostly created memes and cartoons which went viral often. When making “Old Town Road,” he bought the beat for $30 and recorded the vocals at an Atlanta studio for $20. Before releasing the song, he created a series of memes about it to be shared on Twitter and TikTok. He estimates he created about 100 memes about the song.

TikTok’s #Yeehaw challenge helped contribute to the song because a ton of people used it for the challenge. In April of 2019, Billy Ray Cyrus recorded a guest spot for the song. “Panini” is Lil Nas X’s second single and peaked at #3 on Billboard.

The Lesson: Use social media! This should be a no-brainer at this point, but a lot of people still don’t. Lil Nas X was already big on Twitter and made a hundred memes to promote his song. Now we all know about him. Use social media and use it well.

Swift has had a big year, though. She released her album Lover to impressive success. The debut single was “Me!” with Brendan Urie of Panic! At the Disco:

The one slightly negative part of Swift’s year was appearing in the abomination of Cats, which everyone hated. However, her specific role was noted as one of the “better” parts of the film. I haven’t seen it so I can’t say. I did, however, write about Swift in detail earlier this year. If you’re interested, this is a post about a guy who slammed several of my industry colleagues while suing Swift.

The Lesson: I have 2 other lessons from Swift I’ll include here: Get a manager early in your career, and don’t shy away from scandals. Taylor’s continued success this year comes from her continued releases and putting herself out there.

Also like Swift, Sheeran had a decently busy 2019 (although without appearing in Cats, thank god). He released a duet with Justin Bieber in May, called “I Don’t Care.” The song broke streaming records on Spotify:

Okay….I’m trying to just give facts and not opinions but I HATE THIS SONG. WHY DOES ED SHEERAN REFUSE TO AUTOTUNE THINGS THAT NEED TO BE TUNED?! The “ooo ooo ooo” part is SO off key and makes it un-listenable for me. I’m so blown away that no one else seems to care how off that part is, but whatever. Congrats Sheeran, you pulled it off somehow.

In July, Sheeran released his fourth album, No. 6 Collaborations Project. It has a ton of big artists on it, which helped contribute to its success.

The Lesson: My first 2 lessons from Sheeran were to collaborate with a lot of people, and to avoid over-exposing yourself. It seems the collaborations part contributed to his success again this year, so I’ll double down on that advice.

Jacques Webster II, aka Travis Scott, has been around since 2012, but 2019 really took off for him.

In April of this year, Scott released a song with The Weeknd and Sza for Game of Thrones. In August he released his documentary, Look Mom I Can Fly, on Netflix. Television really boosted Scott’s career this year. In December his song “Highest in the Room” peaked at #1 on the Billboard hot 100:

It’s important to note that despite being around since 2012, his first #1 hit was actually last year with “Sicko Mode:”

It has also been brought to my attention that Travis Scott is (or was?) dating Kylie Jenner? I don’t follow the Kardashians at all so I literally had no idea. That probably helped him gain popularity a bit too, depending on what has happened (I really don’t know and don’t want to comment too much on it).

The Lesson: Visual media is hugely important to music success. If you don’t have access to major shows or Netflix, you have access to YouTube and other social media. Use it! Also, don’t give up. If you’ve been working at this for years, let Travis Scott inspire you to keep going. (Also maybe date a celebrity?)

Drake was actually #1 on my list last year. He’s still riding the success of last year, but he did release an album this year as well. It’s actually a compilation of songs released between 2010-2016 that were previously unavailable. It debuted at #1.

On December 24th, he released an official video for his new single “War:”

Drake is no stranger to controversy, and I’m honestly nervous to write too much about him. This year especially he’s been under fire for texting underage star Billie Eilish, after previously texting Millie Bobby Brown. He also collaborated with Chris Brown, who still somehow has a career after beating Rihanna. He then blamed Rihanna for their fighting years ago. You can guess how well that went over. I mention this only because as bad as these things are, they haven’t seemed to slow down his success.

The Lesson: I want to say “don’t shy away from controversy,” but definitely don’t be a creep. Also, if you don’t have anything new to release, see if you can dig something old out and release it as an exclusive.

Khalid Robinson has been steadily growing since 2016, but last year is when his career really started to take off. His song “The Ways” with rapper Swae Lee was featured in The Black Panther movie. He also collaborated with Lorde, Normani, Shawn Mendes, Billie Eilish and Sza. Dude was busy. His most notable collab was with Halsey and Benny Blanco for the song “Eastside.”

His second studio album, Free Spirit, was released along with a short film, which helped boost sales and made it his first #1 album in the United States.

The Lesson: Again, I think collabs are a key here. Pairing up with other big artists helped Khalid bring his own name to their level. Reach out to other artists and help each other grow!

This year has been huge for a lot of artists, but none more so than Billie Eilish. Her alternative style and unique music make her hugely popular with a younger audience. Her older brother is her producer and helped get her started on SoundCloud in 2015. She slowly climbed her way to mainstream until 2019, when she released “Bury a Friend:”

She released her first album in March and it debuted at #1 and broke a bunch of records. Eilish was named Billboard’s Woman of the Year and is nominated for six Grammy awards.

The Lesson: You can’t deny that Billie Eilish is different. Her style, her brand, and her music all form a cohesive identity that her fans gravitate toward. How can you refine your brand to better find your true fans?

I’m honestly surprised Grande hasn’t been on this list until this year, but maybe that’s just because I’m a huge fan and I’ve been following her for a while.

Grande has been performing on stage since she was a young child, both in theater and local national anthems. She got her big break on stage in the Broadway musical 13, and was cast in the Nickelodeon show Victorious and its spin-off, Sam & Cat. Her first album, Yours Truly, was a breakout success and she’s continued to grow from there.

Thank U, Next is her fifth album and the title song was released at the end of 2018, but her single “7 Rings” came out early this year:

She also released a four-part docuseries on YouTube about her professional life and tour. Grande headlined at Coachella this year and won a ton of awards and broke records. I don’t like to list records that people break, because I honestly think a lot of these records are created especially for them to be broken. Like, “this artist is the first person of Scottish and French descent under 6 feet tall to have a top 10 hit.”

I’m saying this as a fan of Ariana Grande; I love her. I just don’t care about these records. Here is a list of records 7 Rings broke if you care.

The Lesson: Grande started super young and has worked hard ever since. Even if you don’t like her, I think her vocal talent is undeniable. I would say the lesson there is to work on your craft. Practice daily and keep at it. Also, Grande is known in both theater and pop worlds, so don’t be afraid to do multiple genres.

The album immediately went to #1. I’ve already covered him extensively so I don’t have a lot to add to it. He remains controversial due to his appropriation of hip hop culture. He seems to have an equal amount of haters and fans, but both seem to contribute to his massive success.

What the top artists of 2019 can teach us

I hope this was helpful and inspiring! Here are the top tips from each artist:

Let me know your favorite artist of the year!