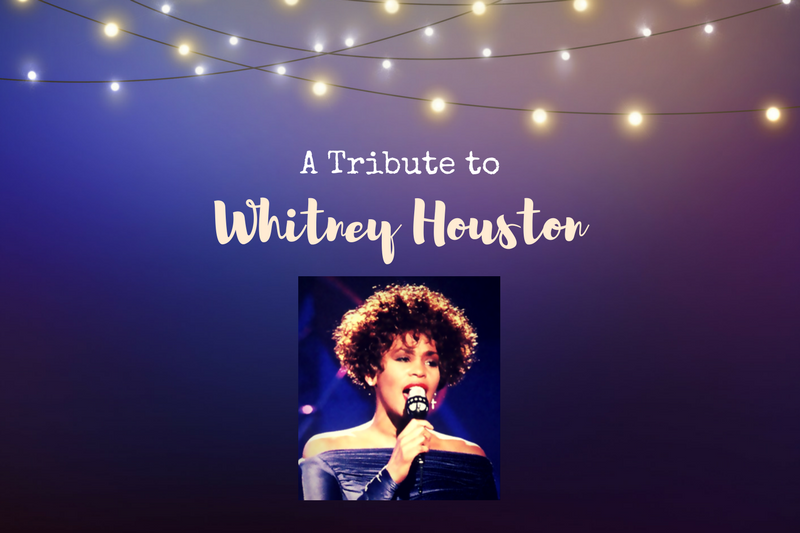 Since today is Whitney Houston’s birthday, I wanted to pay tribute to her and show how much she has influenced my career. I also made a cover of one of her songs at the end! 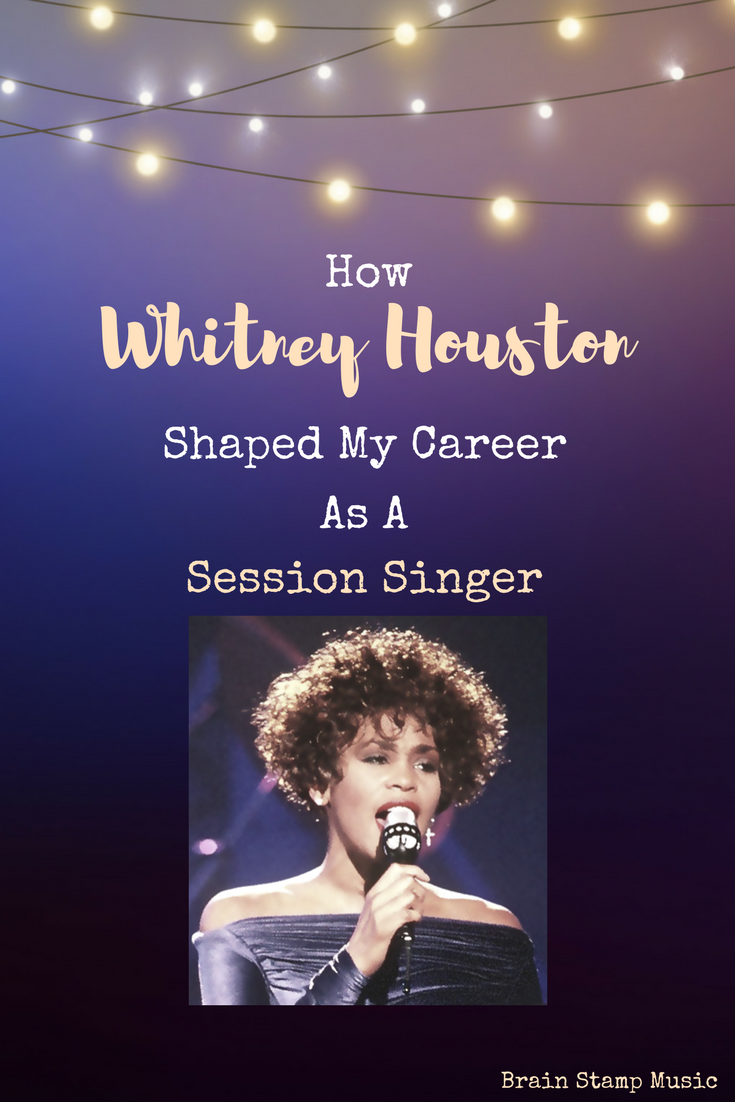 Young kids probably don’t remember the gift that was Whitney Houston, but she was to me what Ariana Grande is to you (I love her too, I’m just saying she wasn’t around when I was a kid). #Old

I’m not going to give you a long background or biopic on Whitney Houston. There are plenty of articles about that, as well as movies, documentaries, interviews, etc. Instead, what I’m going to do is tell you my personal story about how much her music has meant to me. 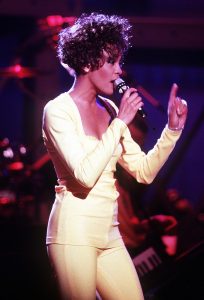 I don’t remember a time without Whitney. Her music was already out when I was born, and I’m pretty sure I loved it from day one. Remember Columbia House, the place that would mail you albums? (Kids, Columbia House was an ancient method of acquiring music before the internet. We ordered physical albums by mail and had to walk two miles in the snow to get them). My first order was every Whitney cd that was currently available. I believe “I’m Your Baby Tonight” had just been released. I upgraded from my cassette tapes to CDs and spent hours staring at the photos in the cd booklets.

CD booklets were so cool. You really got a sense of the artist as a person by the way they wrote their thank-you notes. Of course, now we have Twitter so you can see every thought your favorite artist has, but all we had were CD liner notes.

While pouring over these, I started to notice that all of her songs were written by different people. I was very confused by this. How could she sing a song she hadn’t written? I was at first slightly disappointed, but then THRILLED. This was a great opportunity. If she didn’t write them, that meant someone else had to do it for her. That could be me! This sparked an endless stream of notebooks filled with songs for Whitney to sing. I had enough to fuel her career for the next thousand years, if she wanted to sing songs written by a 7-year-old with zero life experience or writing talent.

I also dedicated my time to learning every harmony part to every song. This was in case she happened to be in concert and a backup singer was sick. She would look out into the audience and ask if anyone happened to know all of the parts to her songs. I would run onto the stage and begin my career right then and there. In case you’re thinking this is really dumb, THAT HAS HAPPENED BEFORE so never underestimate your dreams.

I wasn’t old enough to watch The Bodyguard when it came out. There was sex in it (not really, but there was an after-sex scene that my parents didn’t want me to watch). When it was finally released (on VHS, another relic young kids won’t ever understand), I was allowed to watch it but we had to fast forward through the sex part. I knew from watching this movie that I didn’t want to be famous. It was too much stress and the stalker was really scary to me. As much as I wanted Kevin Costner to be my bodyguard, fame wasn’t worth it to me. Also, can we talk for a second about Rachel Marron’s son? He falls in the lake (spoiler alert!) and can’t swim, and yet throughout the entire movie he’s been hanging out unattended by the pool? Ok.

I loved Waiting to Exhale, but the album kinda bummed me out. A whole album and only three Whitney songs? Come on, guys. We all know why we watched that movie. Still, those three songs (Exhale, Why Does it Hurt so Bad, Count on Me) were phenomenal.

The first time I listened to any new Whitney song, I held my breath waiting for the vocal run that would blow me away. The Preacher’s Wife album is SO FULL of those moments I don’t know how I didn’t pass out from listening to it. I consider this album the height of Whitney’s career (even though, according to her, this is the time her drug use was at its worst). Seriously, please check that album out. You don’t have to be religious to enjoy it, you just have to enjoy a vocalist that is so incredible your brain will stop working for days.

The Preacher’s Wife movie was…okay. I mean it has Denzel and Whitney and Courtney B. Vance and they’re all great, but the premise made no sense to me, even as a child. Whitney’s marriage is in trouble and her son prays for help, and God sends Denzel Washington to save her marriage because apparently God is drunk. “Bad marriage + A hot guy to take the wife out on dates = Temptation for unhappy wife.” Like, who didn’t see that plot twist coming? Anyway, if you don’t watch the movie, at least get the album because seriously.

After this point, I started to notice a slight decline in her music. It wasn’t just vocally, I also felt her label wasn’t giving her the best songs or production anymore. I still loved her and bought every album the day it came out, but here’s an example:

On her Greatest Hits album, there was a song called “Fine.” Here is a lyric from Fine:

I would stick up for you

‘Cause I did adore you

While my dogs would chew you out

Tried to be so nice

On those lonely nights

But I should have figured you out

Sigh. “While my dogs would chew you out”? Who was responsible for this? By this point in her career, I was writing better songs than some of the ones given to her. I started analyzing each song in terms of songwriting and production, deciding what I would do differently and wondering when I would be able to do things like this myself.

I Look To You

Like everyone else, I was very excited for her final album, but mostly just for her as a person. I knew her voice would never be in the shape it once was, and I went into it expecting nothing. I was pleasantly surprised by a lot of it. As for her last movie, I have not yet seen Sparkle. I know, right?? How could I not have seen it yet? My thinking is that it’s the last movie I’ll ever see her in. It’s the last thing I’ll see her do. I am not ready to see it yet.

Her death was not shocking. I saw her on the news a few nights prior, when she had left the club belligerent and noncoherent and I knew she was using again. Sitting on my couch working on music, I got a text from my best friend: “Whitney Houston is dead.” I sat numb for several minutes, but I wasn’t shocked. Some lights shine so brightly that they simply cannot continue to shine for long. I cried. I mourned a woman who taught me that I loved to sing, made me learn the importance of strong background vocals, taught me that I could write songs for other people, made me realize I didn’t want to be famous and gave me ideas for writing and producing. She had shaped so much of my life and career. If I could even do half of that for someone, I would be more than happy.

I had a very hard time deciding what song of hers I’d like to cover. In the end, I couldn’t choose. I sent my Brain Stamp partner a playlist of five songs and let him choose which one we would do. He chose this one, written by Michael Masser and Jeffrey Osborne. I hope you enjoy. Please take a minute to honor Whitney’s incredible legacy with me.

Your Throat Chakra and Music

Your Heart Chakra and Music