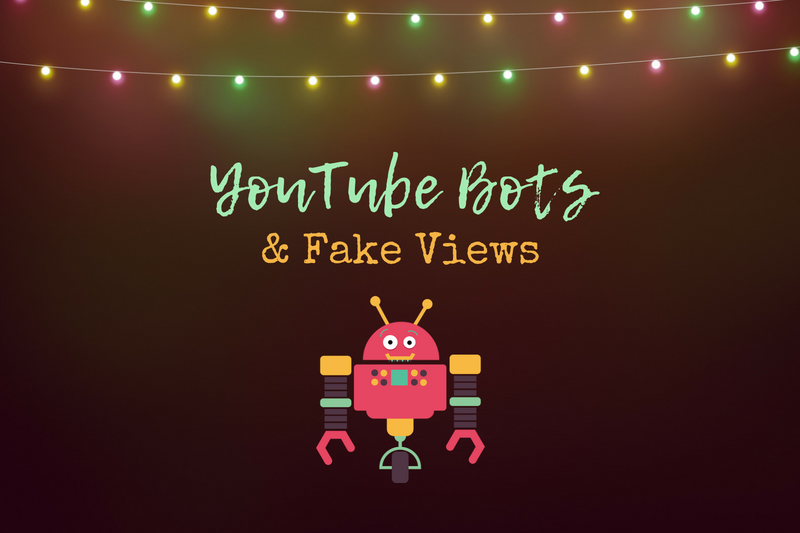 This is part of my YouTube Series, where I analyze what makes YouTube channels grow and how musicians can maximize this info for their benefit. You can see my entire series so far here, here and here. Today we’re comparing two YouTube helper apps: TubeBuddy and VidIQ. We’ll also discuss whether or not buying fake views and subscribers is worth it. 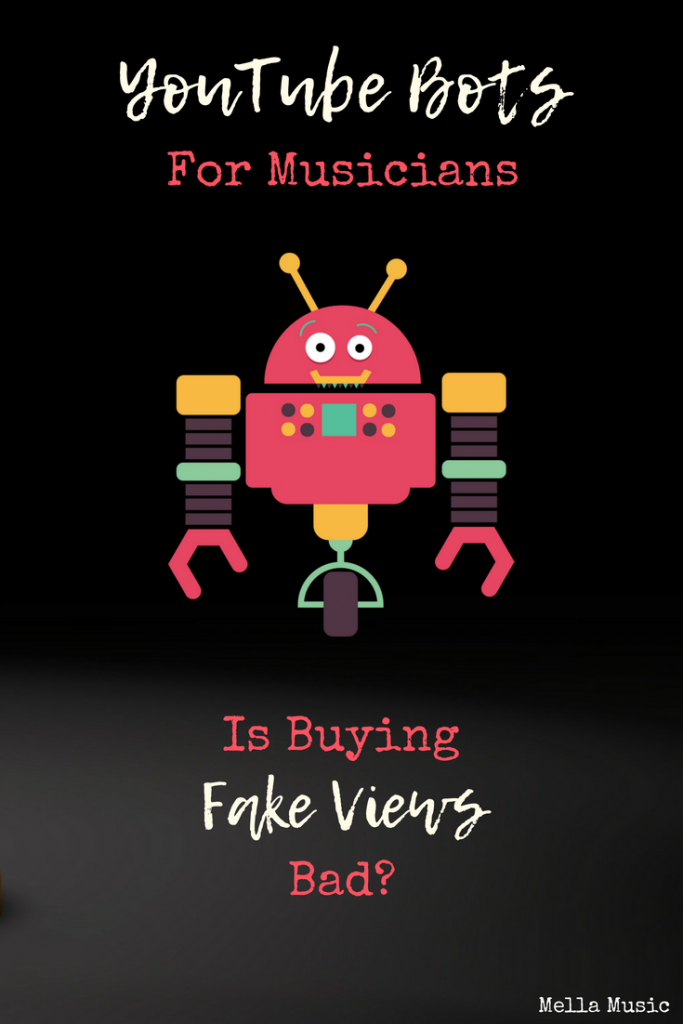 If you haven’t heard of these, they are browser extensions that will help you grow your YouTube channel. They give you things like tag suggestions, an upload checklist to maximize your video’s impact, and helpful guides and information to allow you to make better decisions for your videos.

I downloaded and used both of them, although I was using TubeBuddy already so I feel like I kind of know it better. We’ll start with that one:

TubeBuddy is essentially a toolkit for YouTube. It helps you with things like SEO tagging your videos, gives you more in-depth stats, and provides an upload checklist that helps you maximize your video’s impact. A lot of this will be similar to VidIQ, but let’s look at a few screenshots of TubeBuddy.

This is a shot of a Danny Gonzalez video with TubeBuddy Analytics:

I know it doesn’t look like I’m subscribed to him, but trust me I am “Truly Greg.”

So you can see the social impact, the overall channel, the best practices (other than pinning a comment it looks like he did everything else) and his tags. I find tags to be kind of personal…is that dumb? Like, I wouldn’t want other people to see my video tags. It’s not that I have anything private tagged, but it’s just weird to see what people are tagging. Maybe that’s just me.

Now, you’re probably thinking “cool, this is good info for other people’s channels, but what about your own?” If you go up to the top of any video, it will show you graphs of your own channel:

Clearly my stats are nowhere near Danny Gonzalez’s, but it gives me an overall view.

To be honest, I don’t really understand a lot of them. The line graphs aren’t really showing me a ton of info that I can use to boost my channel, know what I mean? Like “oh, it looks like I had a dip in minutes watched! That means I need to do…” I have no idea how to end that sentence.

On my video below, I reviewed my scores for most of my videos, and shockingly they had mostly high percentages. If I knew what that meant, it would probably be a lot more (or less) impressive. I won’t bore you with the screenshot of that, but it’s in the video if you want to see. Instead, let’s look at one of my lowest rated videos according to TubeBuddy: 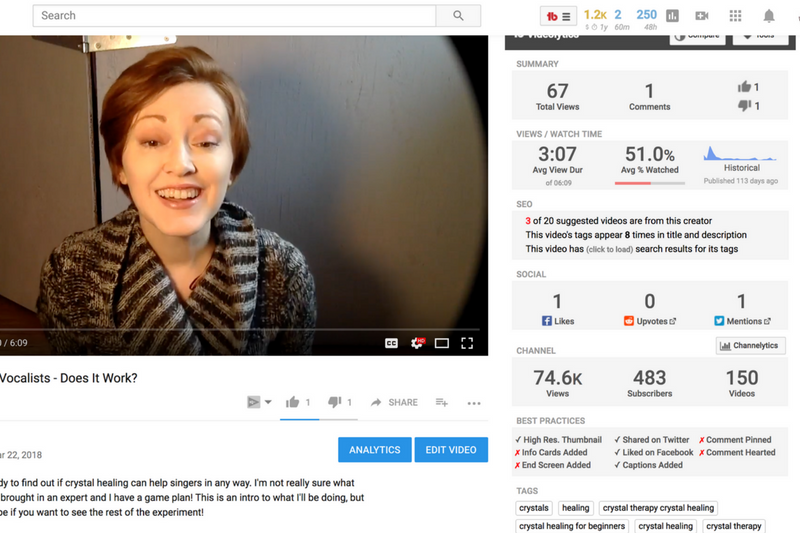 I was a Straight A student, so a 51% score is seriously giving me hives.

It looks like there’s a lot I can do to improve this video (it’s the first video of my crystal therapy for singers project I did earlier this year). It also just looks like the video is twice as long as it needs to be, since people are clicking out halfway through. There’s not a lot I can do about that and I’m not going to delete the video since it’s part of my series, so I’ll try the other tips in the checklist and see if that improves anything.

So, do you think you might use TubeBuddy? If so, let me know:

Overall I think TubeBuddy is a bit more cut-and-dry, a little simpler than VidIQ. So let’s look at VidIQ now:

VidIQ sends a ton of emails with extra info on how to grow your channel. Depending on how much you like extra email, this could be a good or bad thing. I appreciate the extra help but have little time to actually go in-depth and watch the videos they send, so I can’t really say whether or not the emails help.

One thing VidIQ does that TubeBuddy doesn’t is provide a percentage of how many things a video got right. You can see these results on every video on YouTube: 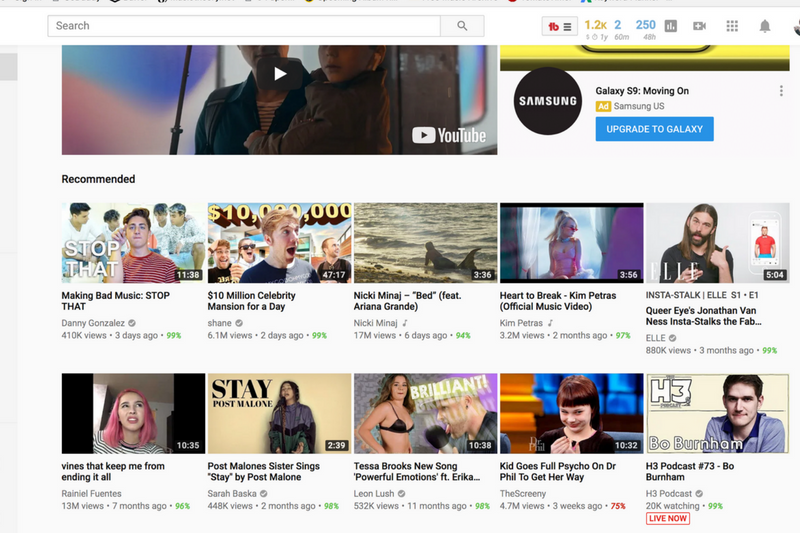 Under each video you’ll see a green or red percentage.

Now, this seems like a cool feature that TubeBuddy doesn’t have, but overall I’m kind of confused as to what the percentages mean. It says it’s based on “engagements and views” – but compared to what? What is the percentage coming from? Here’s a look at the same Danny Gonzalez video with VidIQ: 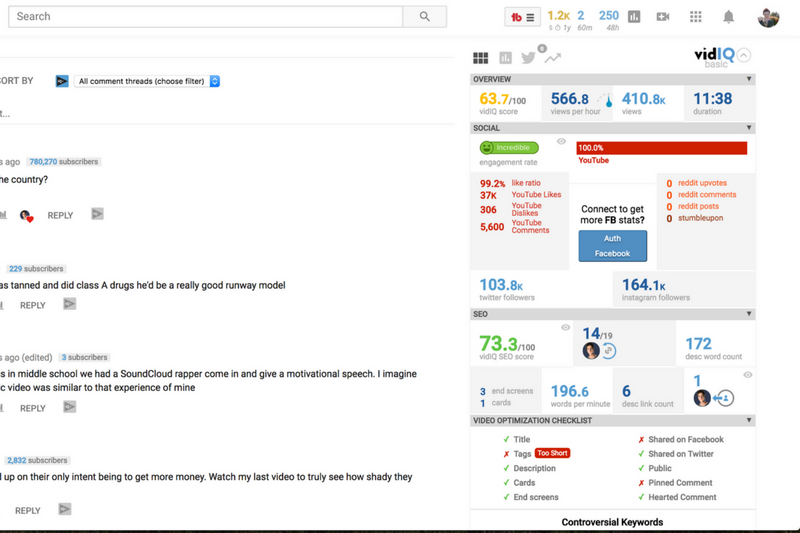 As you can see, there appears to be a lot more going on with this overview than TubeBuddy’s.

So let’s look at this one from top to bottom. You have an overall score of 63%, about 567 views per hour (410,000 total), and the length of the video on top. Under social, it has an “incredible” engagement rate (I’m assuming based on the stats below it), and it looks like it had no interactions on Reddit or StumbleUpon. Sadly StumbleUpon no longer exists, so VidIQ might want to update that. It also shows how many Twitter and Instagram followers Danny has in total. The video got a 73% score on SEO (again I’m not sure what they’re basing that on) and I’m not clear on what the rest of the numbers under SEO mean. It also has a video optimization checklist which is similar to TubeBuddy but has more things to do.

There’s more after this, so here’s another screenshot of the same video: 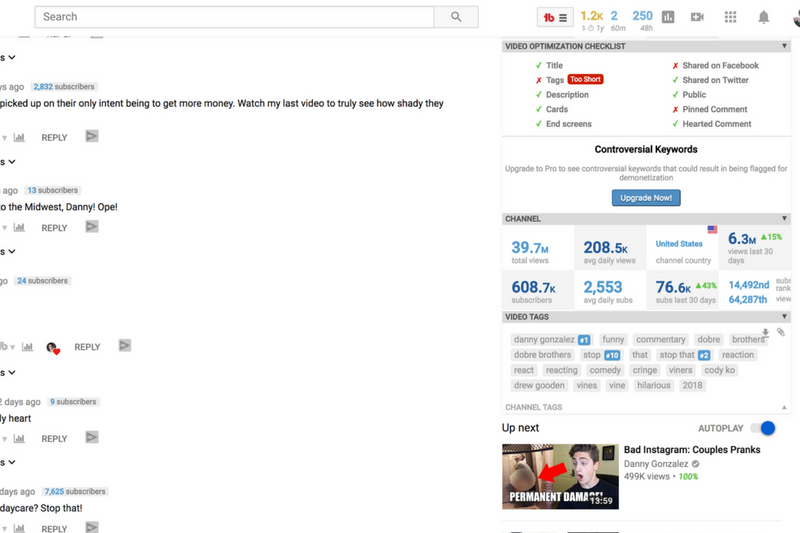 Notice we just scrolled past the checklist to more stats.

You can upgrade for more info to get “controversial keywords,” and then it shows the overall channel score. Then it shows you the video tags similar to TubeBuddy. VidIQ differs though because it shows ranking numbers next to tags.

Let’s look at my same crystals video through VidIQ: 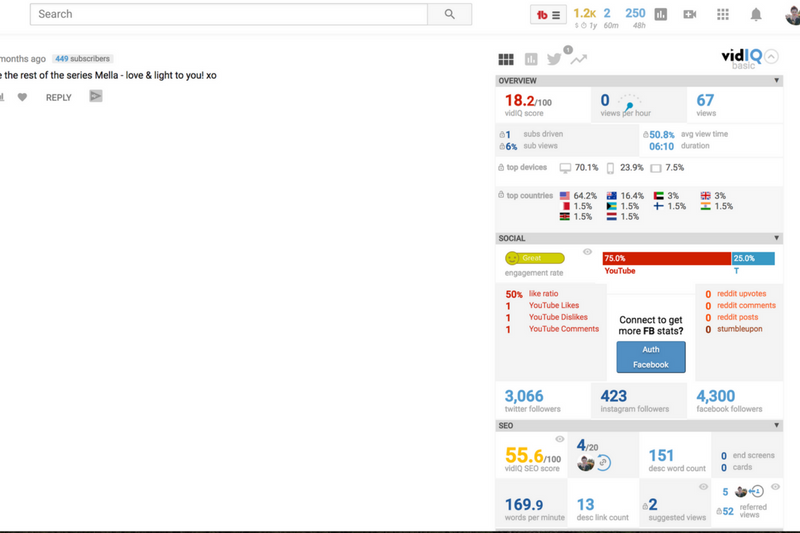 The first thing I notice is that there are a lot more colors than TubeBuddy. This may or may not affect your choice of which to use.

It has similarly confusing stats that I don’t really know what to do about, but an interesting part is the “top devices,” showing me that over half of my views are on computers instead of phones. Over half of my views also come from the United States. I think these stats are actually similar to my stats on this site, so that would make sense.

Did you like VidIQ’s layout better? Let me know!

TubeBuddy vs VidIQ, Which is Better?

This is one of those “Coke” or “Pepsi” questions, so it really is up to you. If you liked looking at one of these interfaces more, I would say go with that one. I feel like VidIQ gives you a lot of other information that TubeBuddy doesn’t, but you might not need that extra info. You can use both together, which is what I’ve been doing, but you probably only need one. I do recommend using at least one, though. Just the tag suggestions alone are worth it in my opinion.

Alright, so now that I compared two YouTube things and didn’t really give a solid answer or opinion on either, let’s get to what we all came for:

Here’s the thing: if you google this exact phrase, you’re likely to find a bunch of responses that say “not at all!” and “You should DEFINITELY buy fake views!” It can start to look like everyone agrees that it’s okay, but it’s important to be really careful of where the information is coming from.

Someone asked this exact question on Quora, and here was the response: 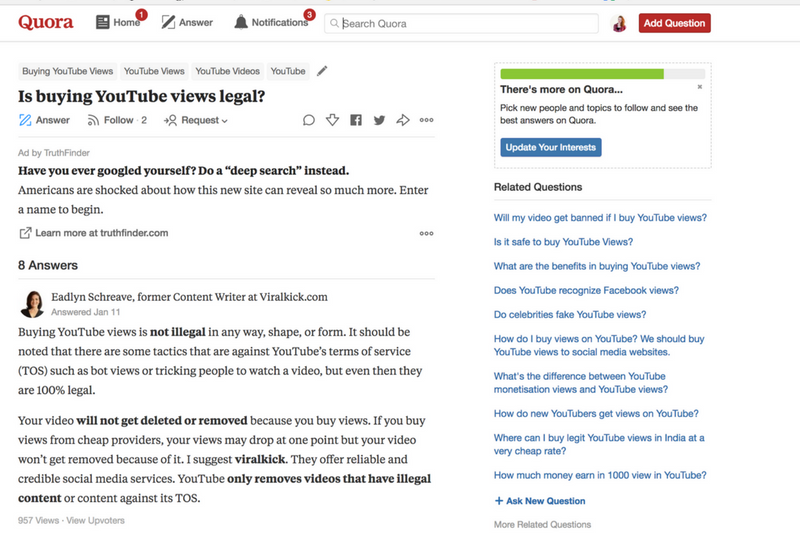 Notice how much she plugs buying views and says that it’s okay? If you look at her bio, she writes for Viralkick.com. She also recommends them in the second paragraph. So, let’s investigate Viralkick: 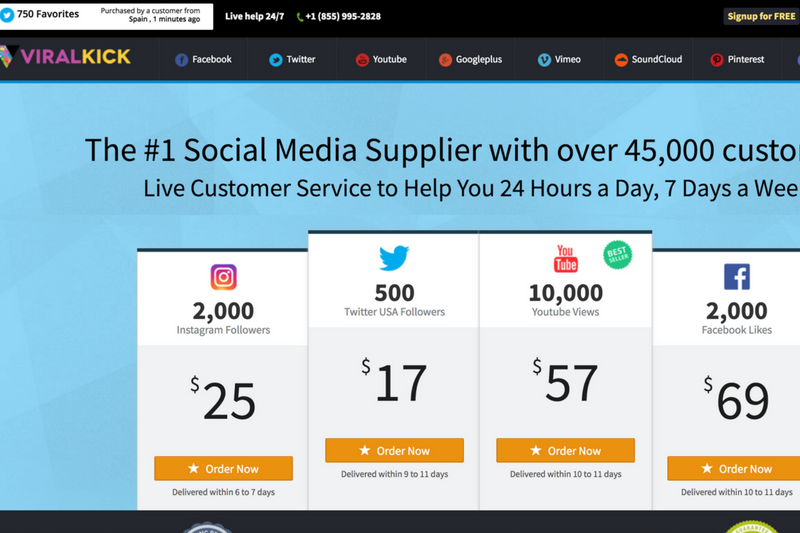 Now, I’m not saying ViralKick is a scam. I’ve never used them, and who knows, they might be legit. But it’s hard to take a view company seriously when they say buying views is okay. You need to do outside research before jumping into it, because you don’t want to get your YouTube account banned.

Unfortunately, in my search for whether or not buying views is okay, I really couldn’t find a cut-and-dry answer. It seems at best to be a risk. YouTube is said to be clamping down on accounts that do this, which may result in your account being removed at worst or your fake views being removed at best.

What about companies that offer “real” views?

Yeah, I’ve seen those. This video shows a Chinese Click Farm, which is a room full of phones doing bot things like watching videos. These may technically be “real,” because the phone is actually playing the video, but what does that do for you? Is the phone going to become a fan of your work? Is the phone going to buy your new single? I just wouldn’t bother.

Now, you could really push with fake views to try to get yourself on the trending page, which would get a ton of real views after that. However, if your video gets THAT many views out of nowhere, you better believe there will be eyes on you and your channel. If your video isn’t high quality, and your other videos don’t have as many views, people will start to wonder what’s going on. This is when your channel might come under fire. It’s just important to be careful, is all I’m saying.

Here is my video recapping most of the blog, but you get to see my dog whining about me ignoring her so it’s worth the watch (plus you’ll give me an extra real view, which would help me out!)

I’m really curious to know your thoughts about fake views. Do you think they are helpful or harmful and why? Let me know in the comments!